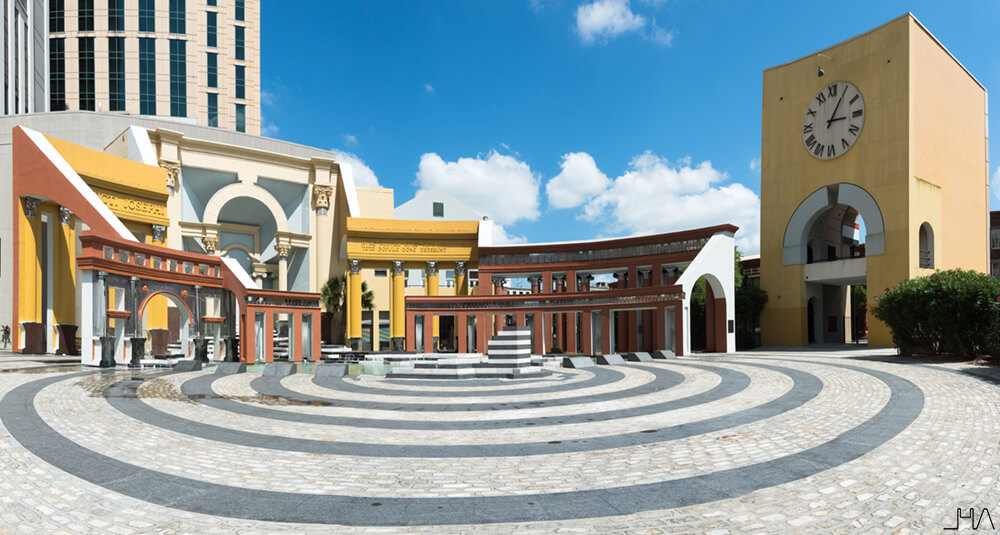 There are many reasons to visit a city like New Orleans, but very few know that the Piazza d’Italia is one of them.

It was considered a masterpiece of architecture even before it was built. Today, after a dark period, it looks its best again. 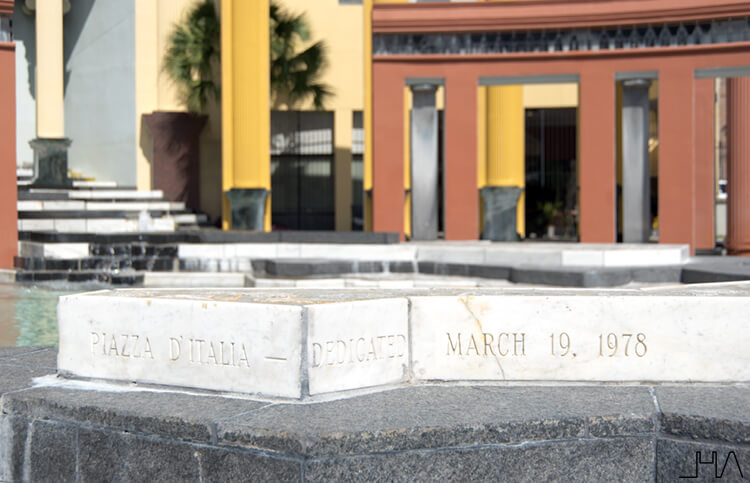 The Piazza d’Italia is possibly the most provocative project I have ever visited. That cocktail of shapes, materials and colors left me speechless. Let’s start with the context to better understand this interesting work.

Piazza d’Italia as a symbol of Postmodernism

Some time ago we saw postmodern architecture and one of its most representative works, the Guild House by Robert Venturi in Philadelphia.

If you have not done so yet, I recommend that you read that article to better understand the foundations of this artistic and intellectual trend.

After this, you will understand why the Piazza d’Italia is a perfect example of postmodern architecture. Certainly, it is the most important as a public space.

The person in charge of the project was the well-known postmodernist architect Charles Moore, together with the architecture firm Perez & Associates of New Orleans. It was not the first public space that Moore designed, but it was the only one that became a reference work even before it was completed. 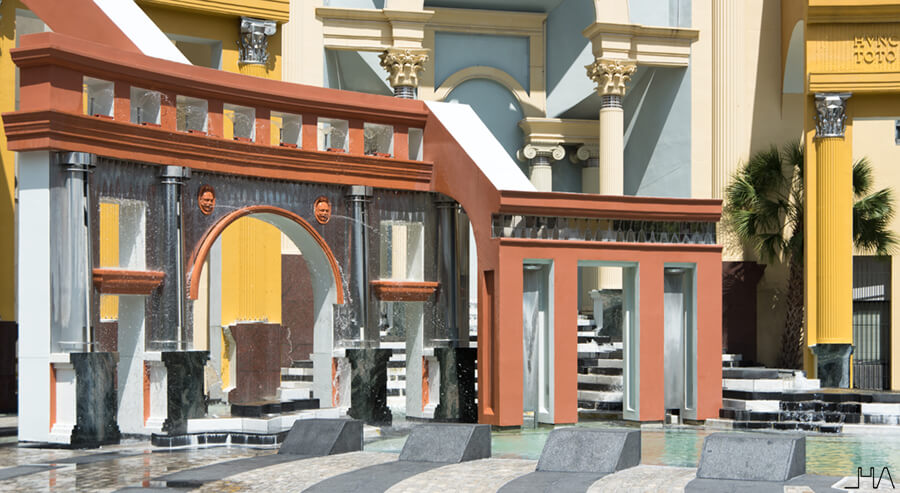 The project started in 1974, when the leaders of the Italian-American community in New Orleans decided to commission a project to commemorate the Italian immigrant community in the city.

The site was located in a warehouse area that was somewhat neglected, very close to the Mississippi River and its port. The intention was to initiate the urban regeneration of the area, so close to the famous Vieux Carré -French Quarter- of New Orleans.

Sadly, after its opening in 1978, the Piazza d’Italia fell into disuse and began to deteriorate rapidly. It came to be known as the first “Postmodern ruin”.

It wasn’t until 2004 when a comprehensive restoration returned it to its original state. 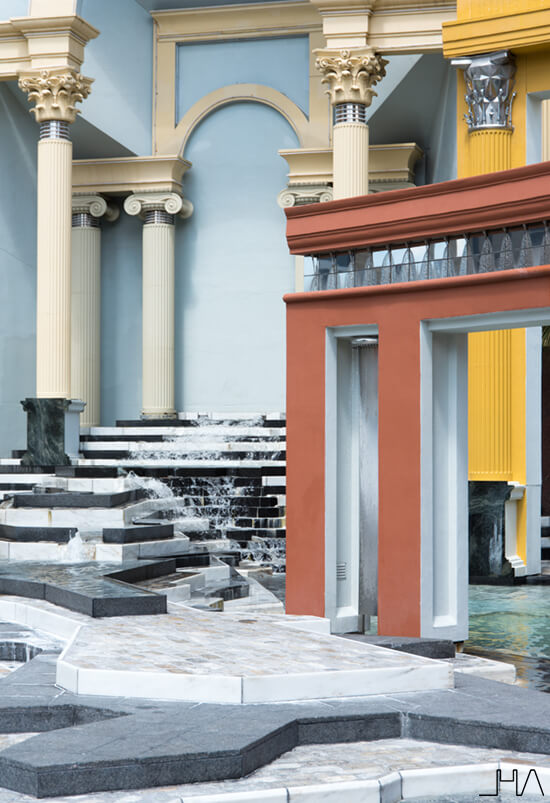 To better understand the Piazza d’Italia, we need to know this intriguing architect.

Charles Moore was an intellectual who spent his life teaching at the best universities in the United States. His theory was based on the enjoyment and study of how architecture could make people happy.

“Disneyland must be regarded as the most important single piece of construction in the West in the past several decades”, was one of his controversial statements.

Note that, at the time, the predominant style in architecture schools was the International Style, also known as Modern Movement or Minimalism.

The International Style has strict aesthetic guidelines and it is quite inflexible, especially in terms of ornament.

If you want to know more about this architectural style, you can read the article about the Weissenhof Siedlung in Stuttgard. There you will see projects of the modern movement by important architects such as Le Corbusier or Mies Van der Rohe.

However, Moore was completely contrary to the International Style. The postmodern architect believed that “Architecture is about possibility”.

Charles Moore wanted his works to inspire joy and connect with ordinary people.

Would he achieve his goal with the Piazza d’Italia? 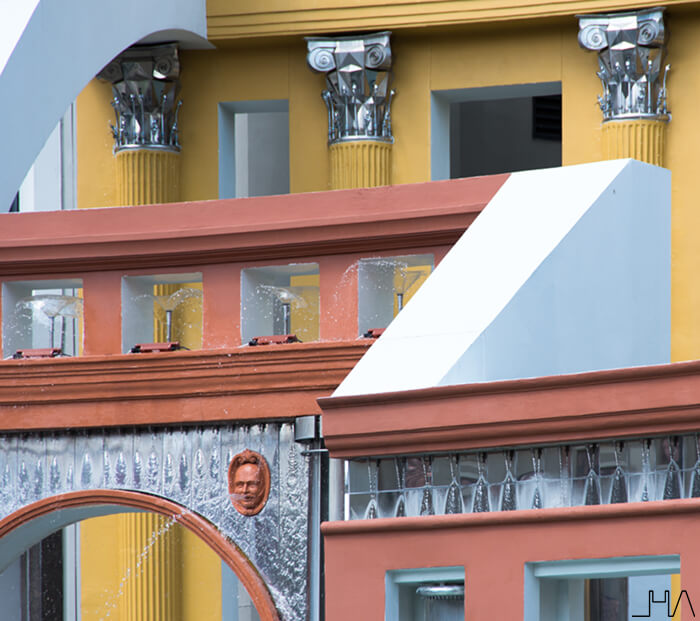 One of the most beautiful things about Italian cities is the joy that floods the historic neighborhoods. Public squares full of life, winding streets with magical spots, and endless charming places that appear around any corner.

This surprise effect is exactly what Charles Moore wanted for the Piazza d’Italia in New Orleans. The initial project included a narrow street leading to a square full of shops and cafes. 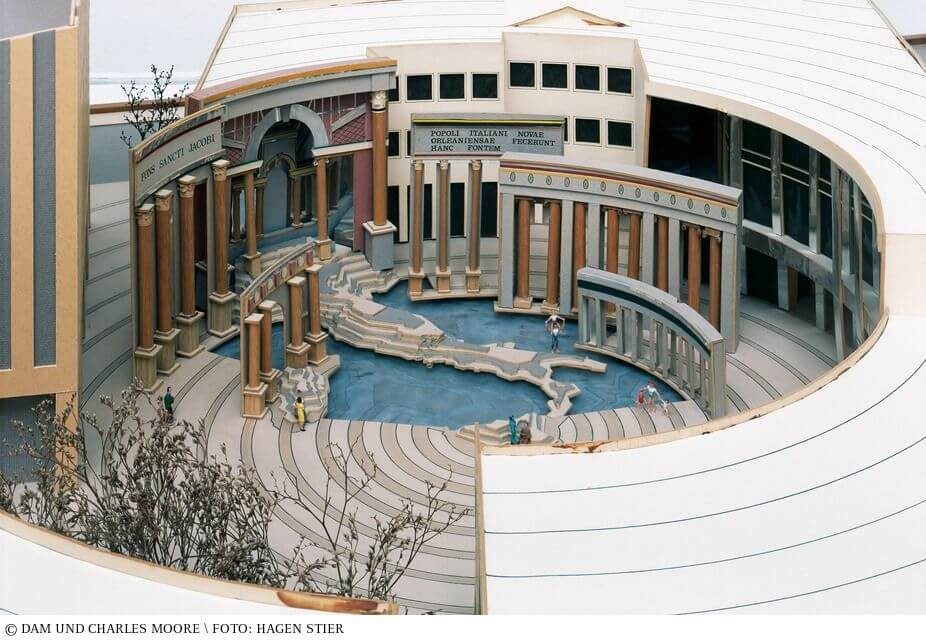 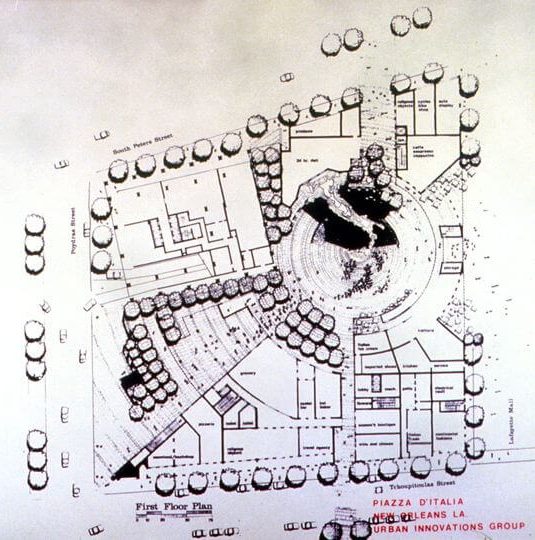 Nevertheless, Moore did not pretend to reproduce a typical Italian plaza whatsoever.

The controversial architect used ordinary materials and elements out of context, thus seeking provocation. He declared that there is no need of many inventions to revolutionize architecture. 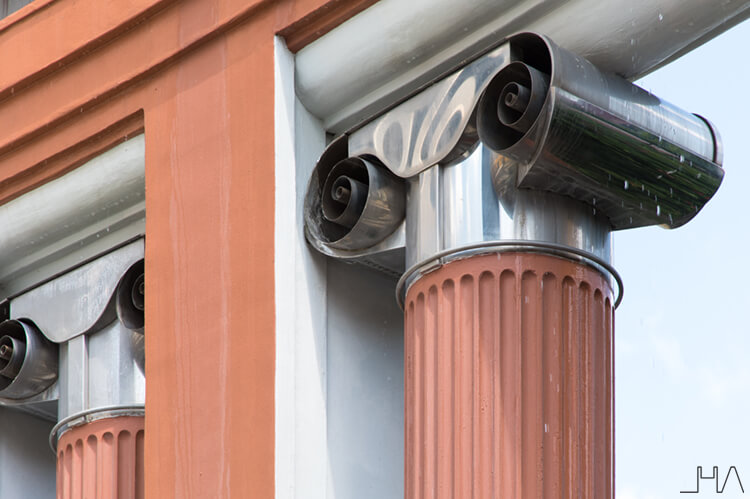 Sadly, the project for the Piazza d’Italia was fragmented. The existing buildings located on the West side of the plaza were demolished.

The initial idea of ​​a closed circular plaza ended up becoming an open stage.

In the previous plan you can see the intention to restore the lower side for closing the plaza. Unfortunately, the Piazza d’Italia is now desolate facing a boring parking lot.

Burst of color and styles in Piazza d’Italia

Even though the project was not completed, the plaza by Charles Moore became a postmodernism landmark. For those interested in this artistic movement, the unfinished project is undoubtedly a must-see. 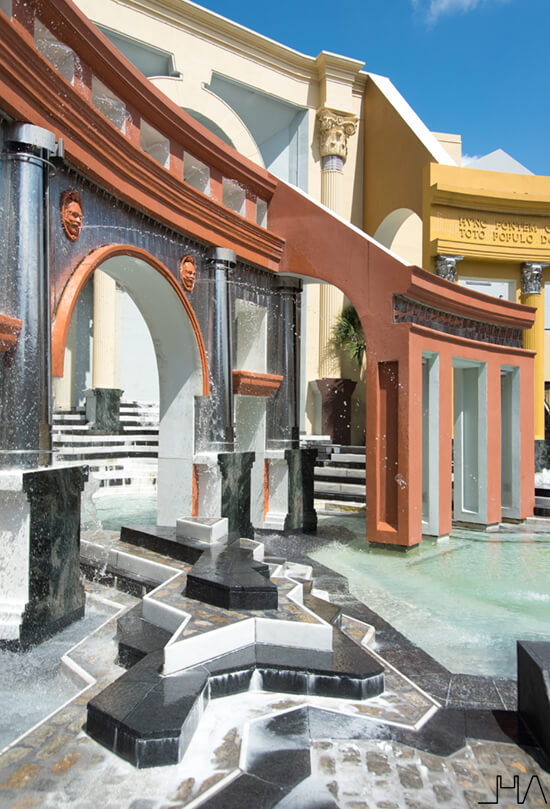 The day I was planning to visit the Piazza d’Italia, I didn’t know what to expect. What would be the first surprise?

I could see it from the fence, but not happy with that, I decided to go back the following day.

As soon as I crossed the clock tower, I felt in a fantasy world.

Classical columns, fun fountains, arches and portals everywhere. There was even a Roman temple!

An eccentric illusion peppered with a burst of color.

The striped pavement is reminiscent of Italian squares. It draws the gaze to the center of the plaza, where a stepped fountain made of granite blocks rises outlining the Italian peninsula.

Around it, the colorful scenography inspired by the ancient Rome stands proudly. 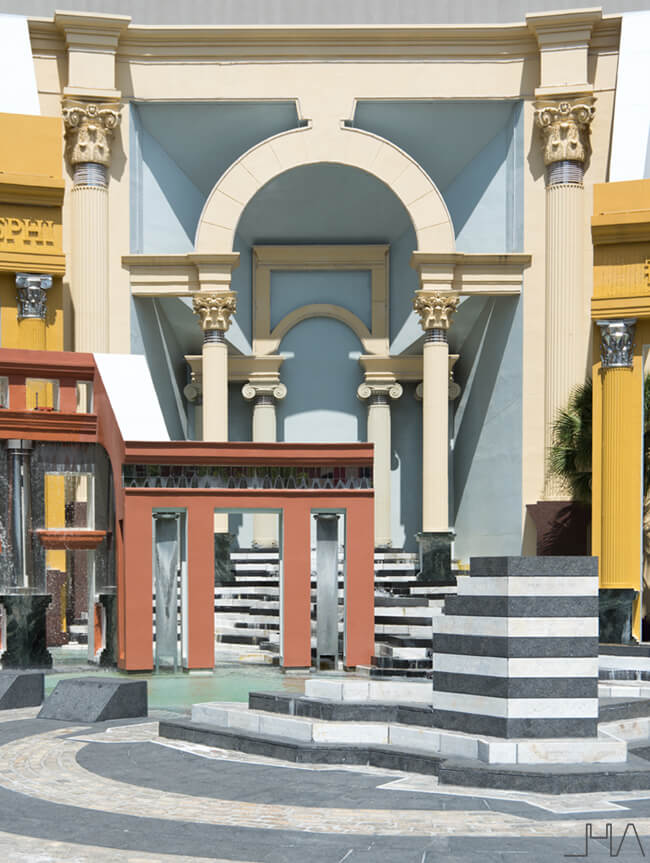 The Piazza d’Italia not only draws attention for its shapes and colors, but the materials also play a very important role. From Ionic capitals made of stainless steel, to acanthus leaves drawn by jets of water.

To top it all off, imagine this entire ensemble lit up with neon lights when the night falls.

Is it provocative enough for you? Then wait, because there is more.

The funny fountains that pour water through their mouth are Charles Moore’s own face. Did you expect that?

I can’t think of a better way to leave your own stamp on a project. ;). 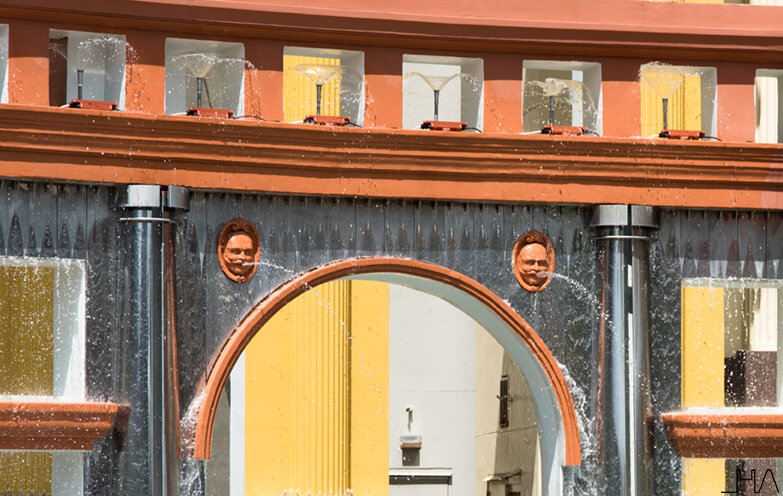 Without a doubt, the Piazza d’Italia is an experience for the senses.

At the beginning of the article we saw that the Piazza d’Italia was located in a developing area.

Although it is true that the neighborhood has changed a lot and it is livelier now, there is no doubt that the Piazza d’Italia misses the area of cafes and shops. As a result, this cheerful public space looks quite lonely.

We don’t know if some day we will see the Piazza d’Italia as Charles Moore conceived it.

Until then, we can enjoy the perfect expression of the Italian ‘gloria di vita’, as defined by the American Italian Cultural Center of New Orleans. 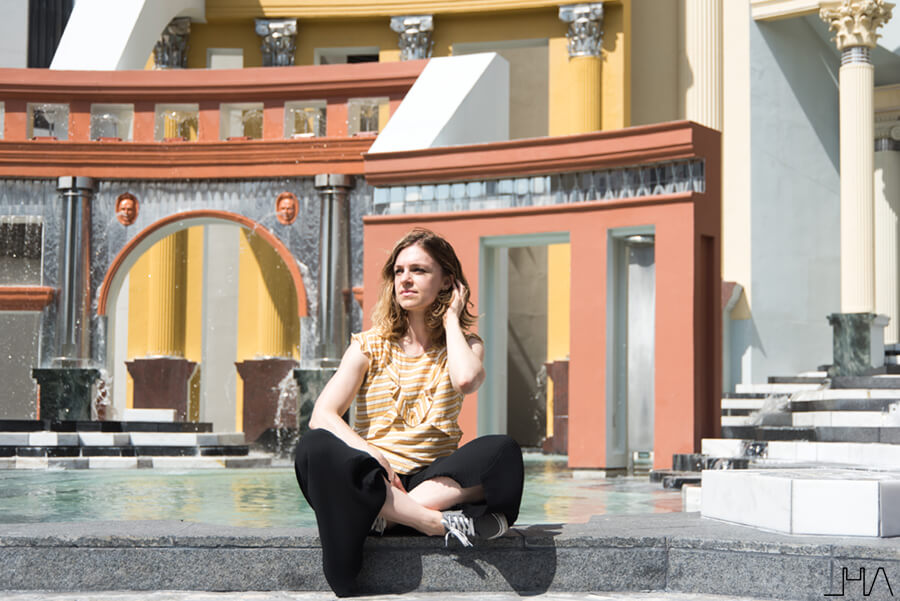 Have you ever visited a project as provocative as this one? I’d love to know if you would like to visit the Piazza d’Italia in your next trip to New Orleans.

Trust me when I say that it will not leave you indifferent. 😉

Visiting New York? Do not miss it!