WEISSENHOF. The cradle of the Modern Movement

It was in 1927 when the association Deutsche Werkbund organized the Die Wohnung exhibition -The Dwelling- in a neighborhood called Weissenhofsiedlung in Stuttgart. Under the direction of the German architect Mies van der Rohe, the purpose was to design new solutions and eliminate the housing shortage after the World War I in Germany. Therefore, 17 architects -including Mies van der Rohe- were invited to participate in the new neighborhood, which would gather 21 buildings. The exhibition had a great impact on society and it meant a break up with traditional architecture, promoting the birth of a new style –Neues Bauen– and the CIAM -International Congresses of Modern Architecture-. 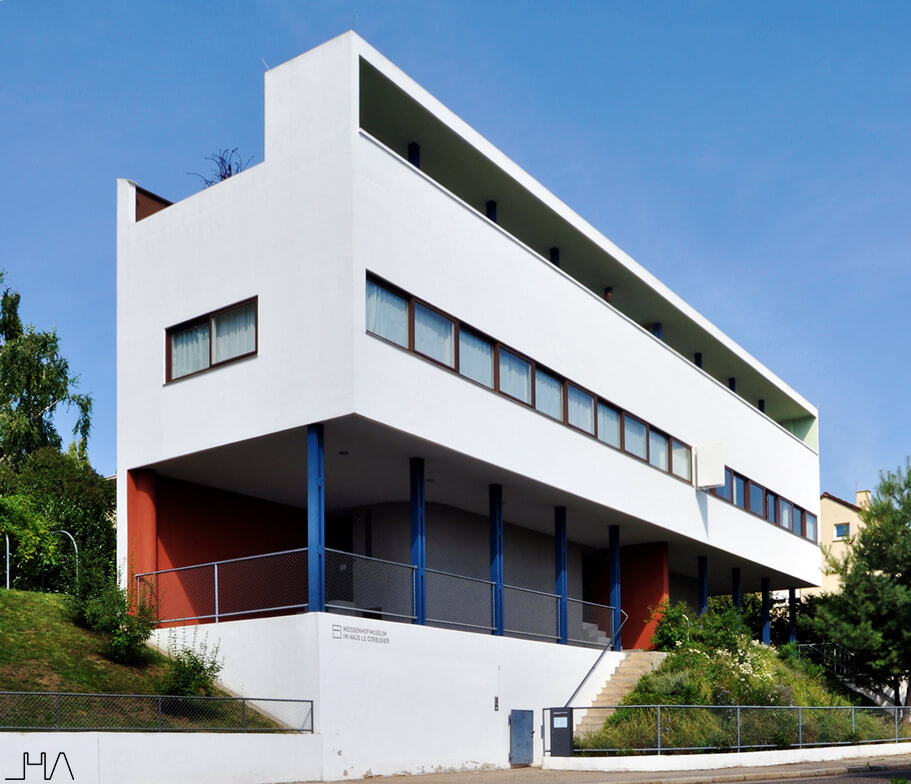 In this context Le Corbusier and Pierre Jeanneret built the “Semi-detached House”, which nowadays contains the Weissenhofmuseum. As the other dwellings, this one seeks to be constructed efficient and inexpensive, based on standard components and on industrialized materials. To save time and reduce production costs, the construction method is organized carefully.

All that and more is explained in the exhibition that the Weissenhofmuseum hosts in its left half. This one shows the history of the “Semi-detached House” and the Weissenhof neighborhood from 1907 until nowadays, including original documents. The left half of the museum is a really good place to discover the style which emerged in the 20th century, and also an exhibition of the different stages of the house, which was hugely modified during the 60s. 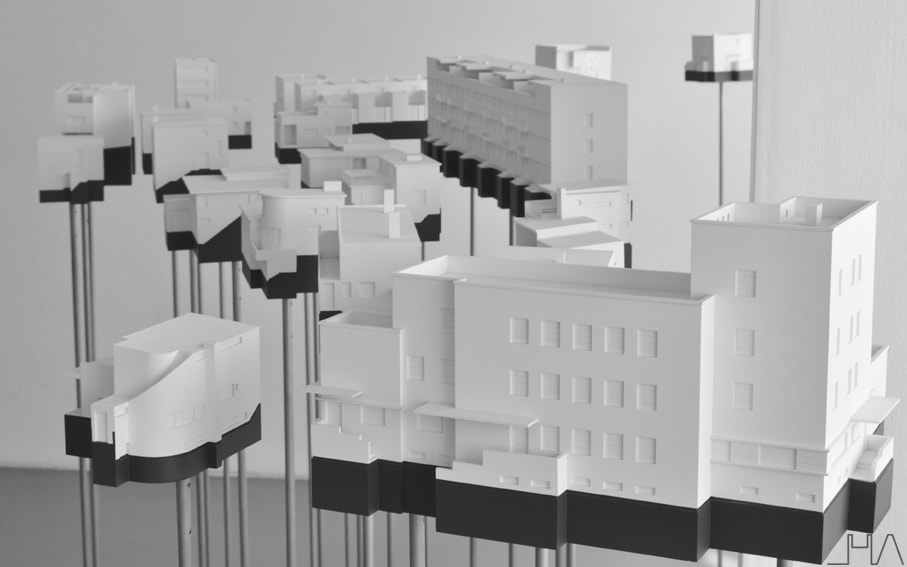 Once the visit of the first half is completed and one has acquired as much information as possible, it is the moment of coming in the right half of the “Semi-detached House”. But before that, it is a pleasure to visit the roof terrace that both dwellings share. This is a perfect place to leave stress behind and enjoy the views of Stuttgart, before coming back in the house. 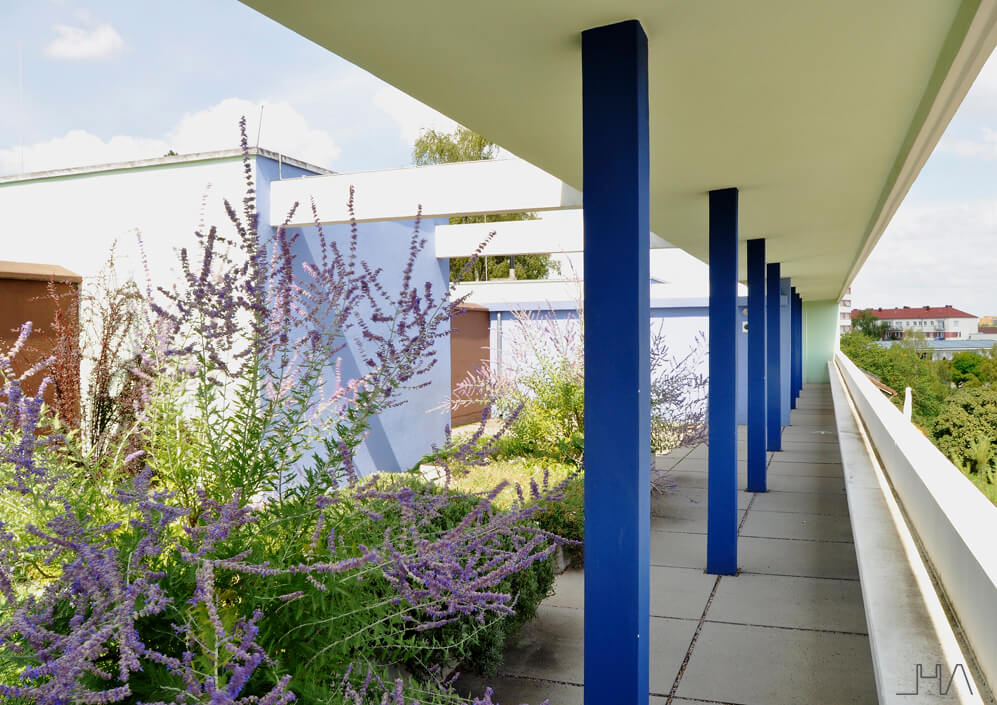 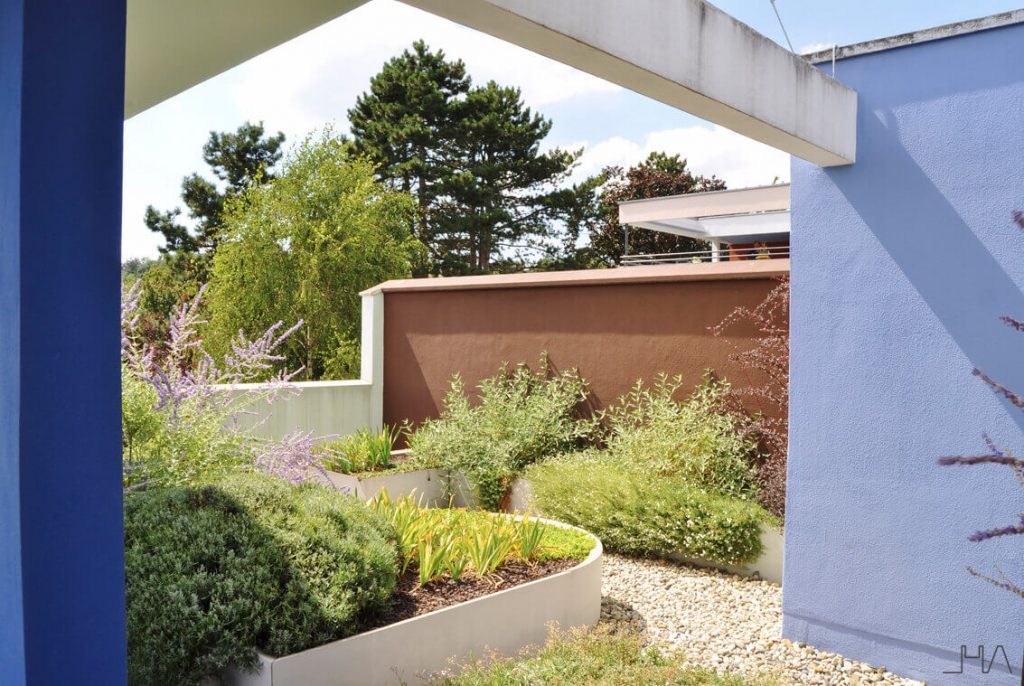 The right half is exactly as it was presented in 1927, so that the interiors transported us to the Die Wohnung exhibition throughout the tour. After all the modifications that the house has undergone, nowadays the furniture and the colours are like the first day, thanks to the original documentation and the great work of the restorers. 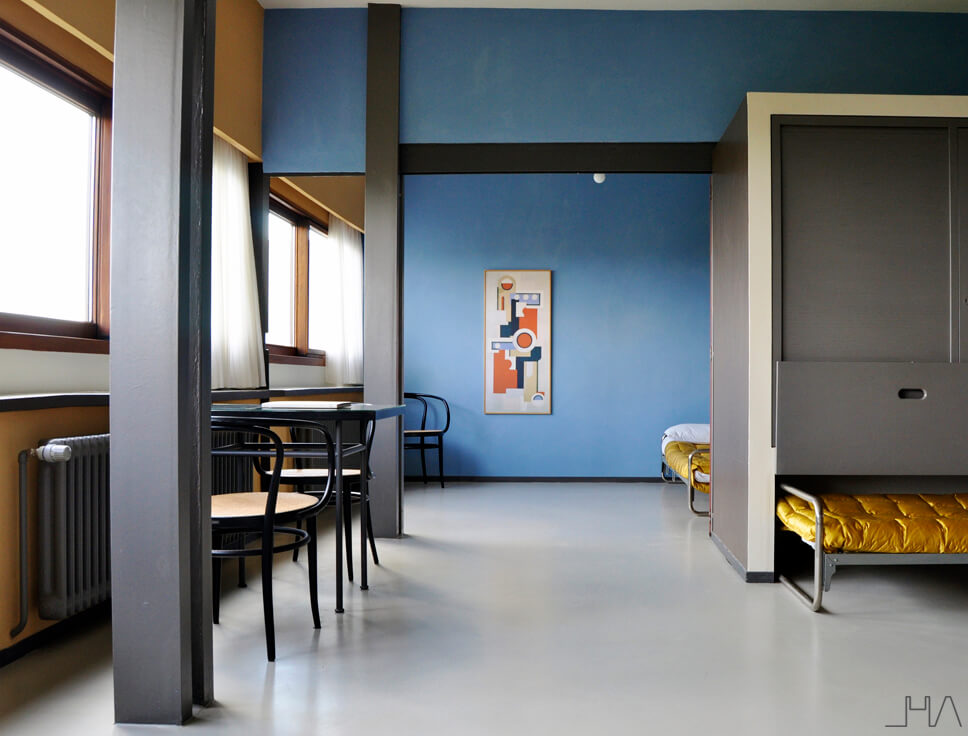 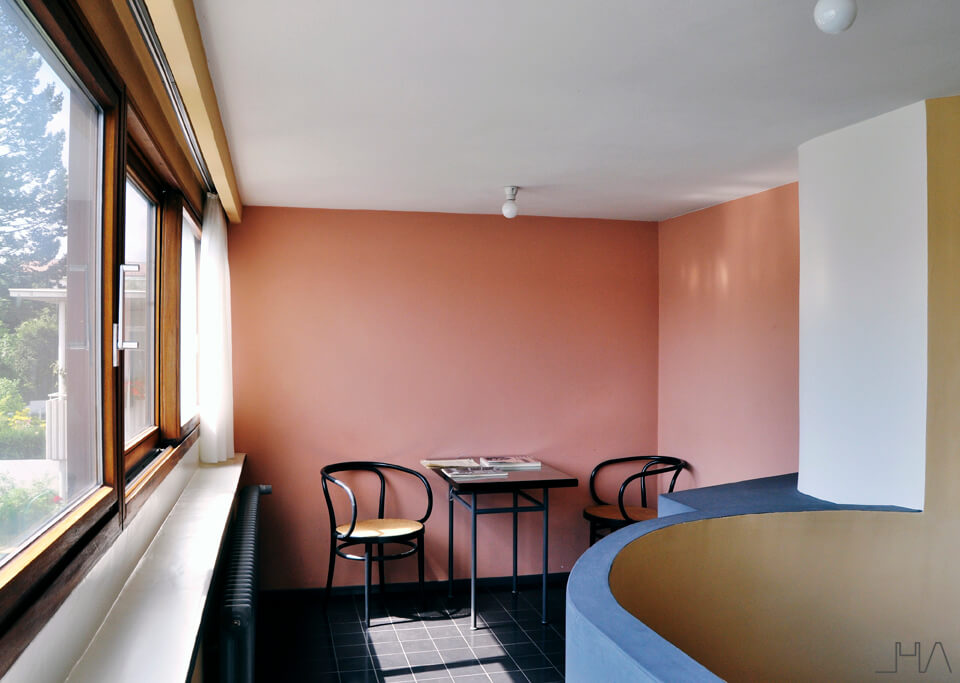 The dwelling, where Le Corbusier applied the famous “Five points for a new architecture”, is plenty of light, air and movement, because of the open spaces and their big horizontal  windows. We cannot forget that the “Semi-detached House” is in search of new solutions to the minimum dwelling, and hence the need to experiment with the uses of day and night.

The living room turns into the bedrooms, thanks to big closets which hide the beds during the day. The floor finish and the little care required by the furniture, as in the rest of dwellings of Weissenhofsiedlung, made the housework easier, with the purpose of allowing women to pursue a career.
The idea that the bedrooms were like a sleeping car at night and other things as the narrow corridors and the simple finishes, attracted popular comments and criticism, which were extended to the Neues Bauen. 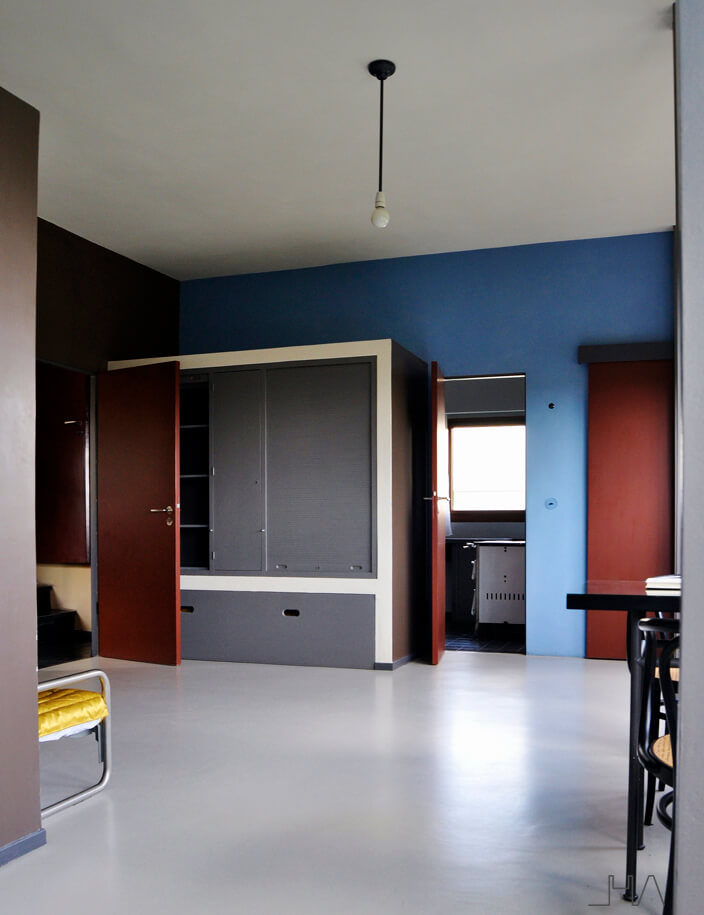 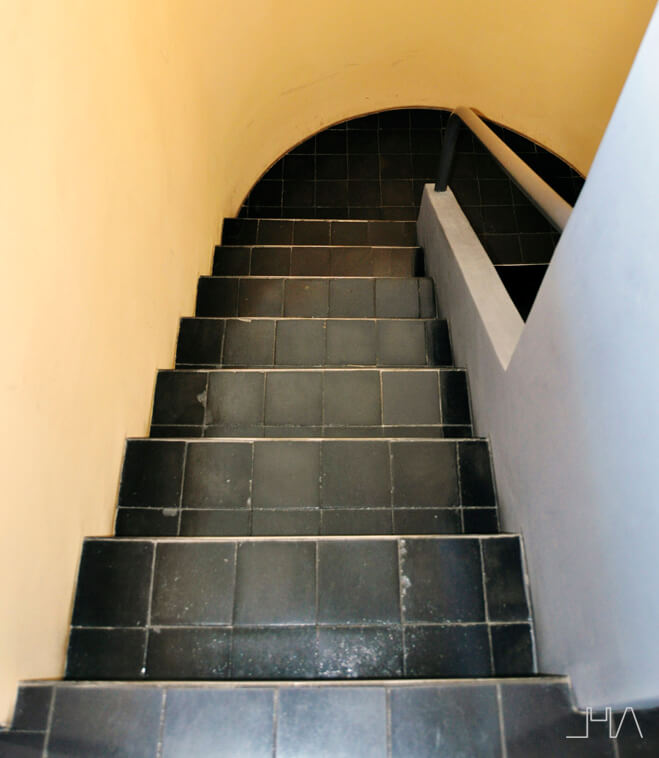 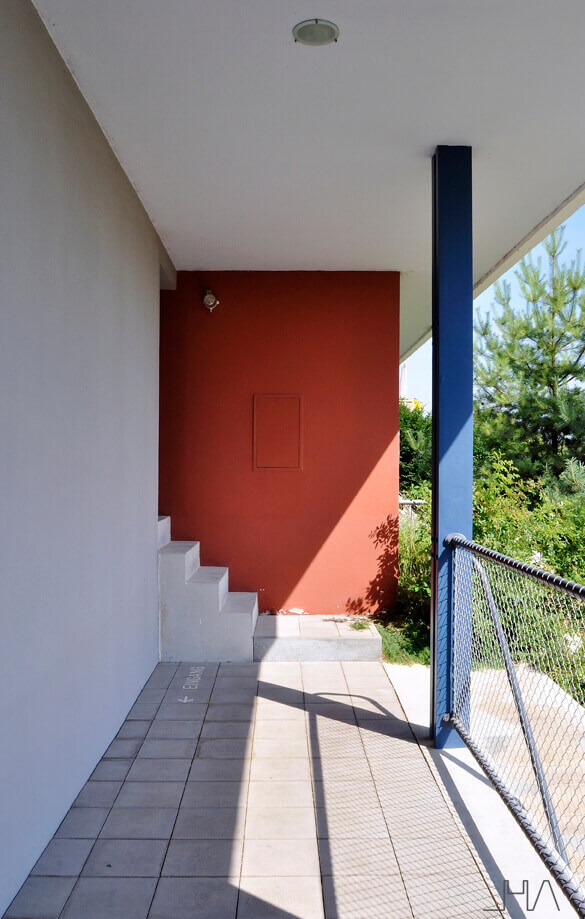 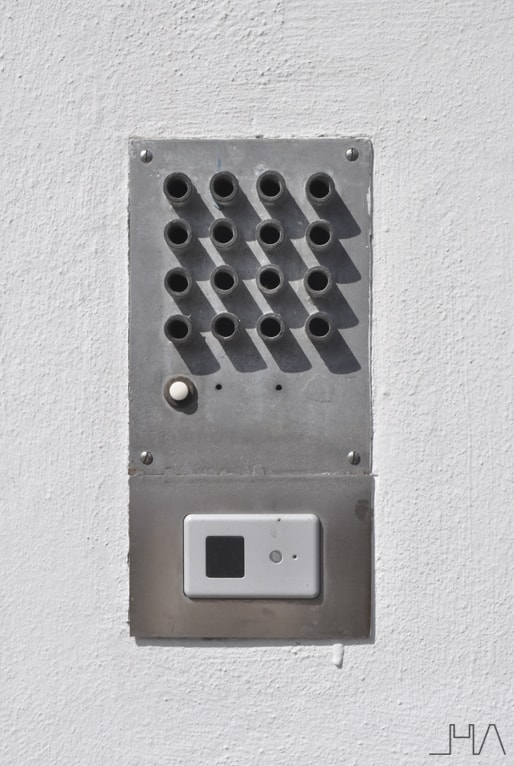 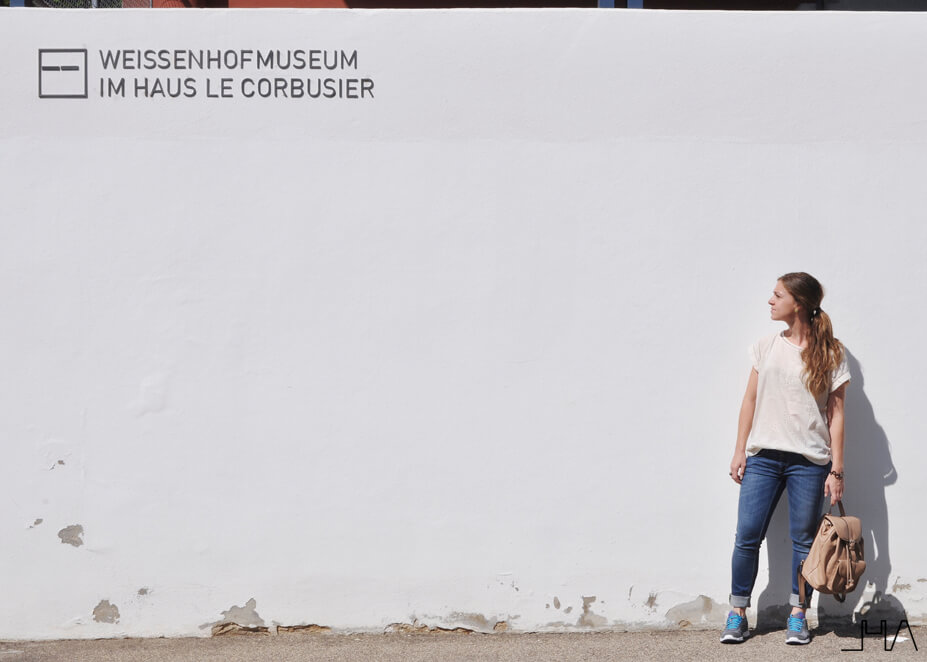 Apart from the “Semi-detached House”, Le Corbusier and Pierre Jeanneret also built a “Citrohan” house in the Weissenhofsiedlung, whose spaces are bigger. Unfortunately, it is not possible to visit neither this one nor the other houses that are preserved, as they are for private use. 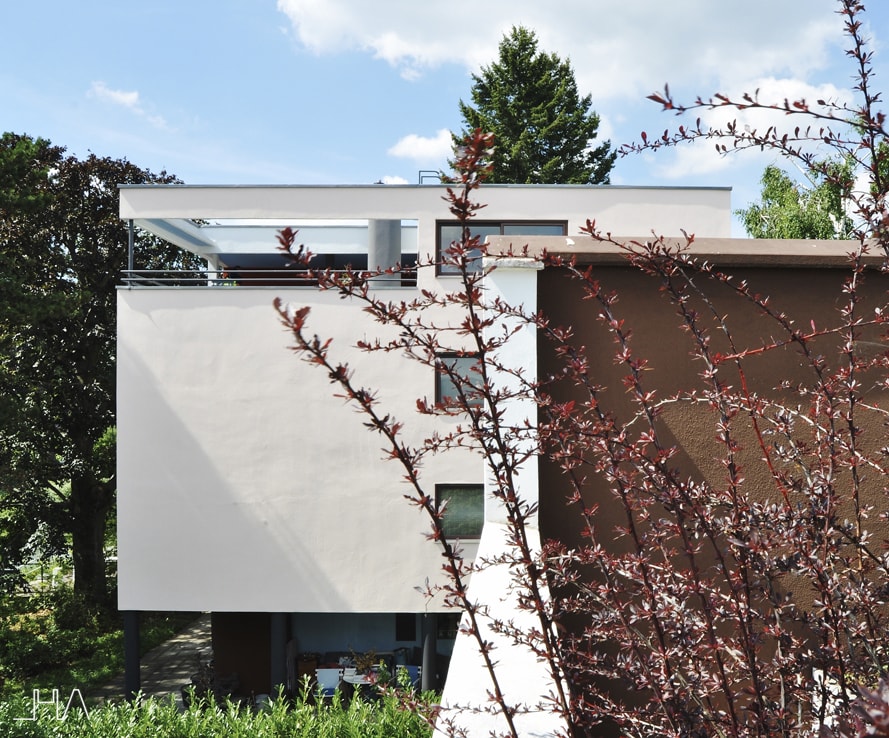 The neighborhood, as the “Semi-detached House”, also suffered during World War II. During the Third Reich it was violently rejected, and later abandoned. Ten of the twenty-one original buildings have not reached our days, as some of them were destroyed by the allied forces and later the rest because of the damages caused to them.

This is the reason why it is possible to see buildings that were built after 1927 in the neighborhood. The ones that were part of the Die Wohnung exhibition are easily recognizable by metal boards placed in the entrances, which present drawings, design ideas and construction peculiarities of the houses. In the most affected area by the bombs, the Doecker ground, nowadays it is possible to see a metal board that commemorates the destroyed buildings.

Later you have a list with all the buildings and the architects which took part in the exhibition. Now, I present you the ones that are conserved and the photos I took during my tour around the Weissenhofsiedlung. 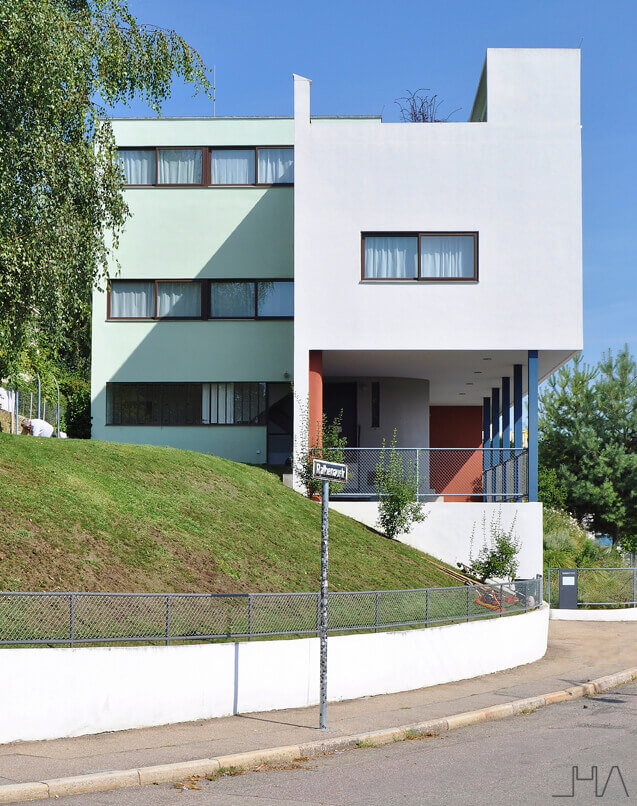 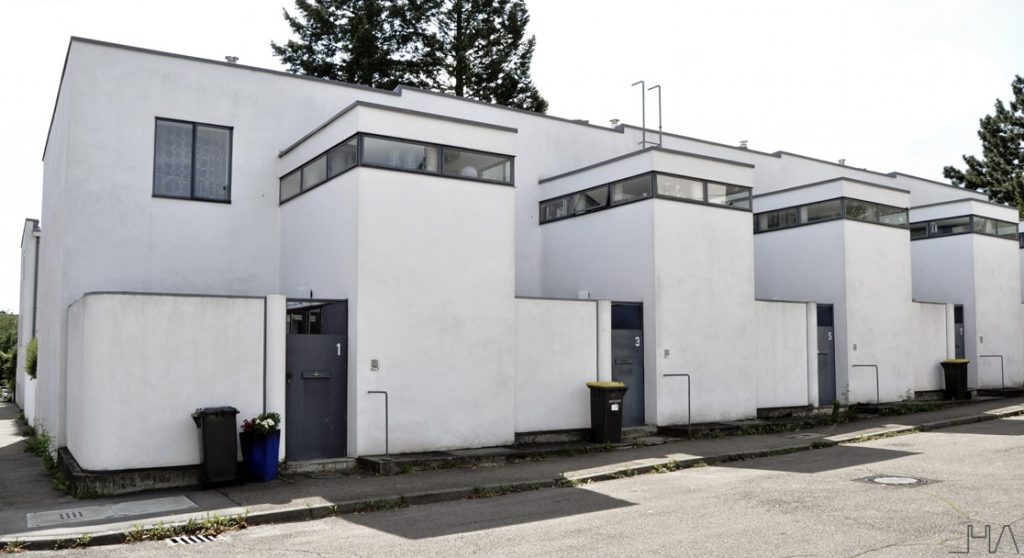 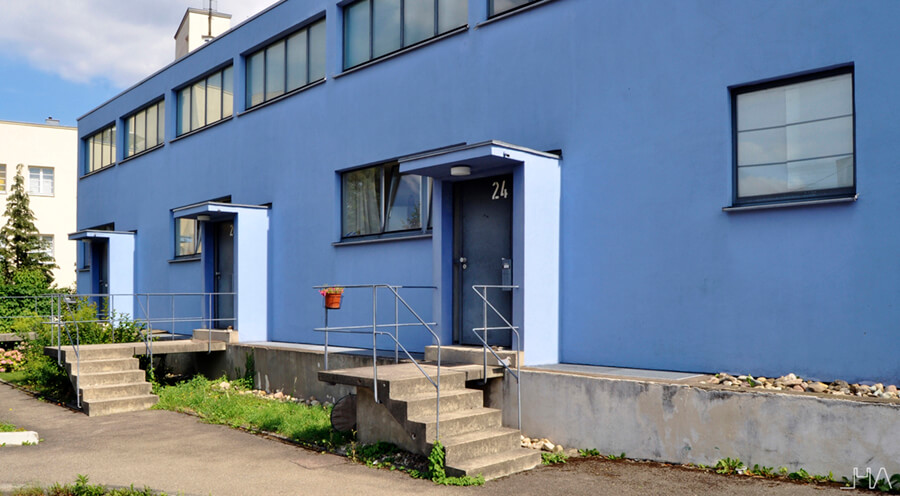 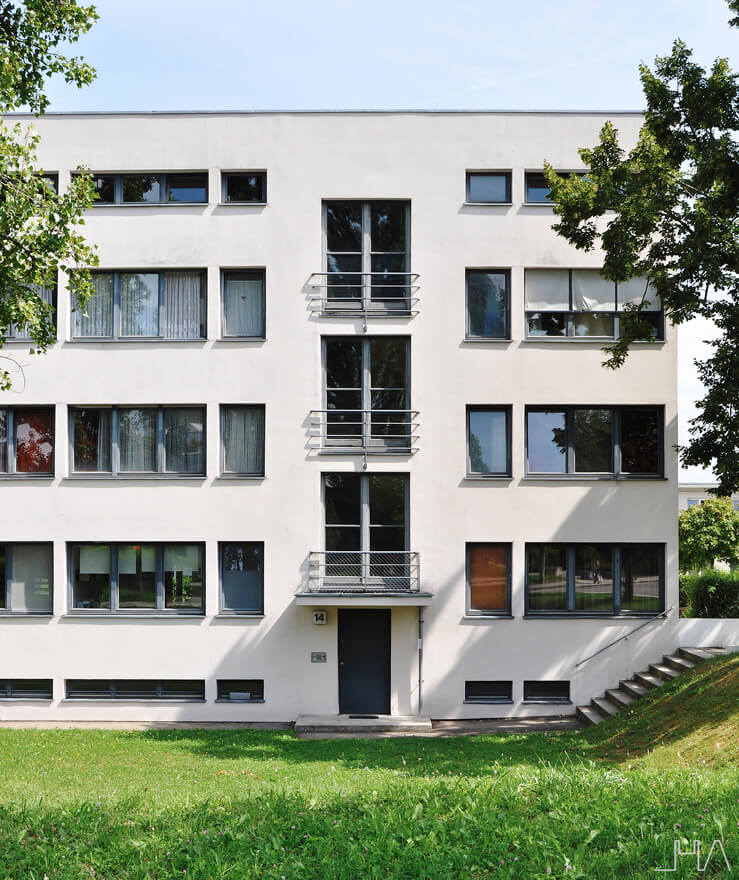 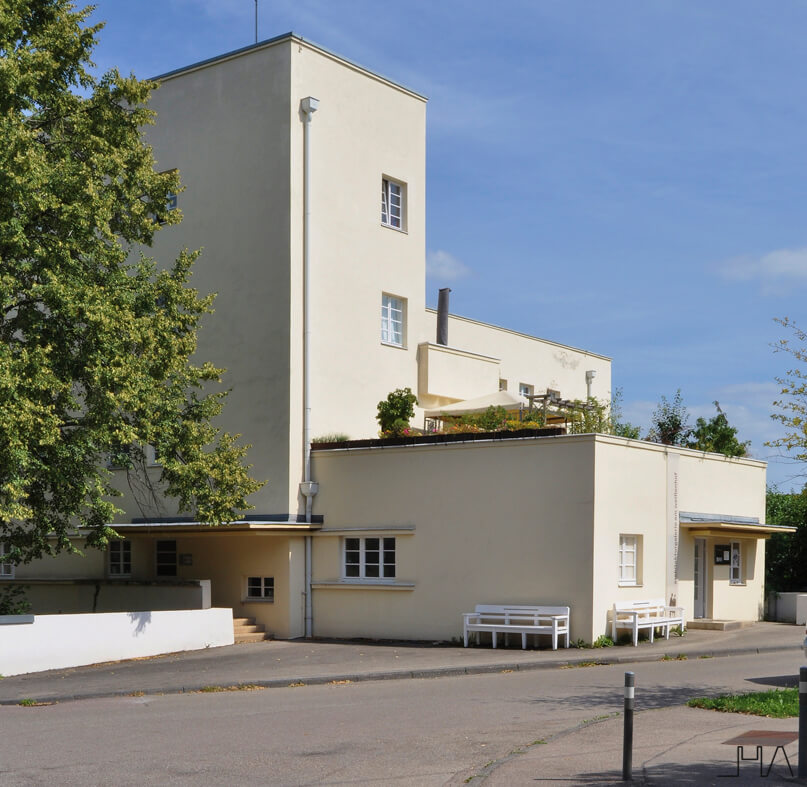 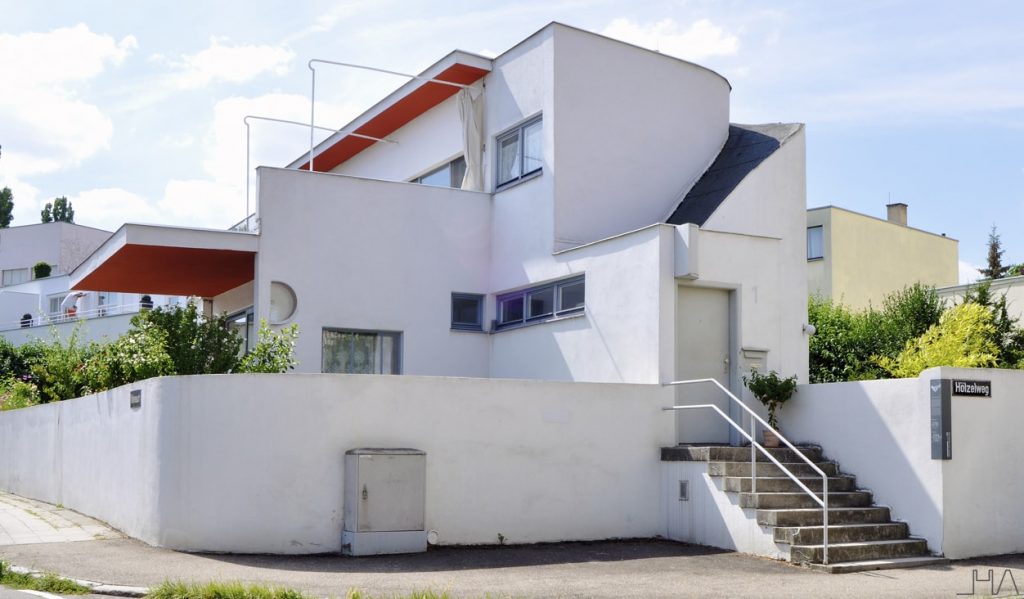 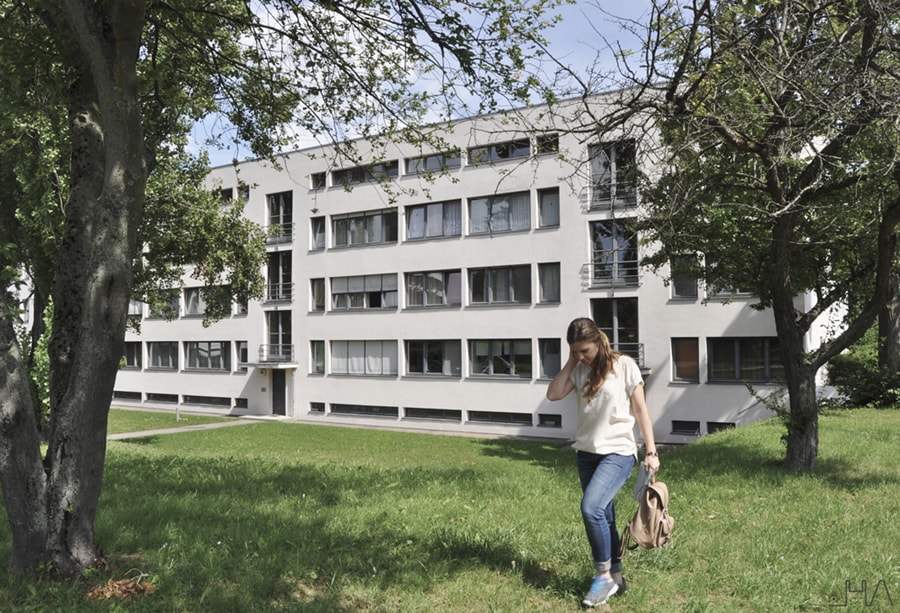 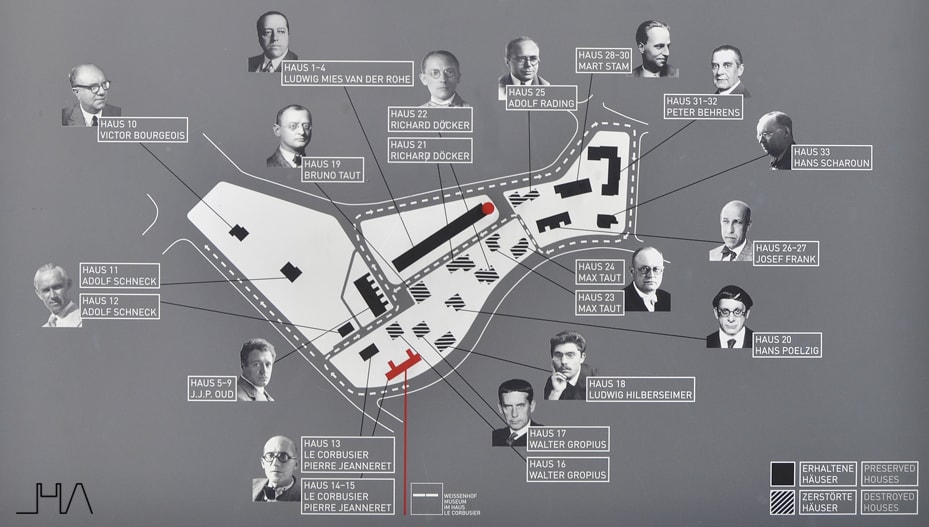 It is an undeniable fact that the Die Wohnung exhibition in 1927 had a great impact at the time -more than 500.000 visitors-, but even nowadays it can be astonishing.

Finally, I cannot resist showing you the most famous photograph of the complex. It represents the analogy between the house and the machine, as Le Corbusier said, the house is la machine à habiter. 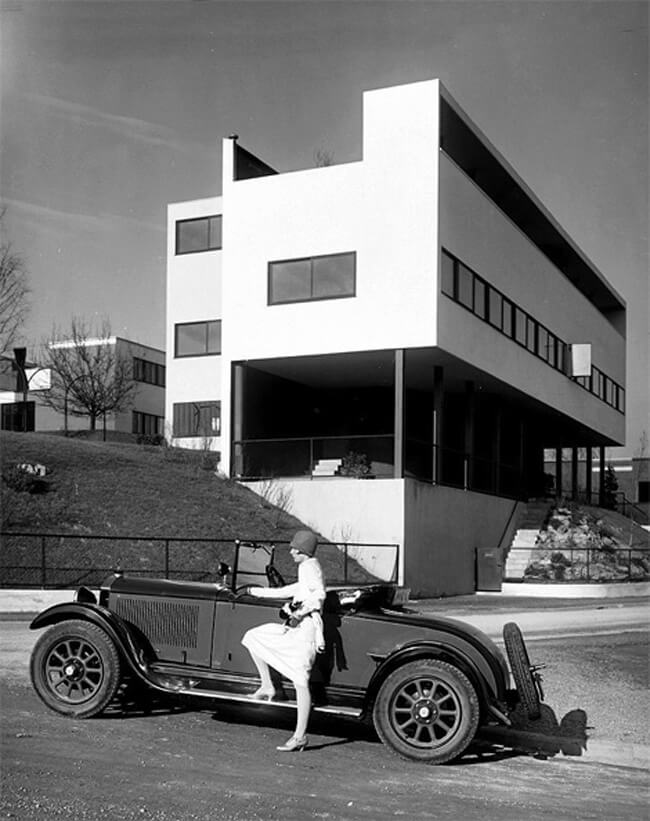