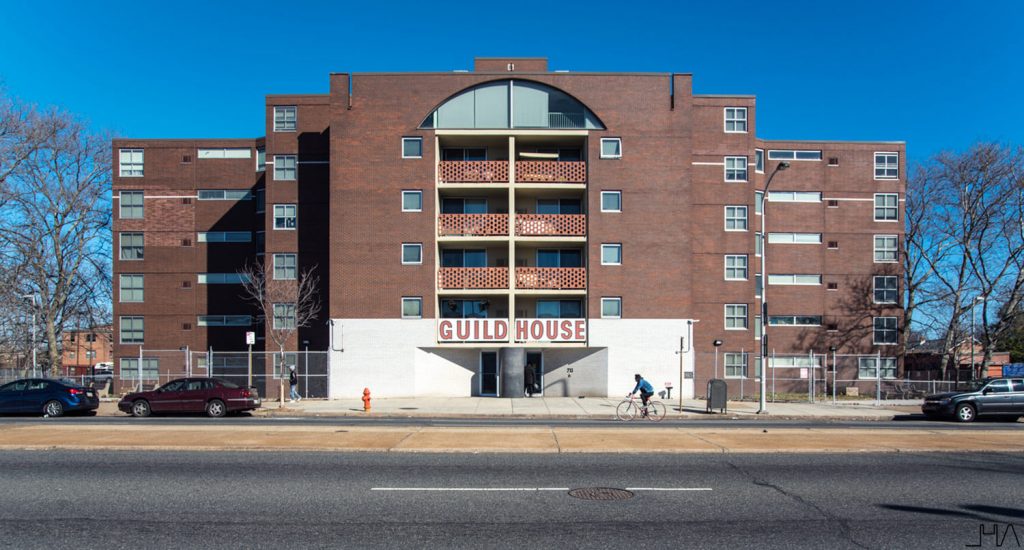 The Guild House is one of the most representative works of Postmodernism,  an architectural movement that started in the late 50s. This emerged as a criticism against the International Style of the modern movement. According to postmodern people, this last one was boring and not interesting at all.

Robert Venturi, and his mate John Rauch, were the architects who designed the Guild House in 1960-1963. It is located in Philadelphia, in a humble neighborhood, and I couldn’t miss it during my trip to the city.
It is an apartment building for the elderly with low incomes, and it looks like a cheap construction of social housing.

The most interesting part remains in the main facade, where Venturi illustrates the rejection of modern ideals. In case you want to recall them, you can take a look at Le Corbusier works we have seen before.
The architect said: “… In the House of Guild symbolic ornamental elements are loosely applied literally… The symbolism of the decoration becomes ugly and ordinary, with a hint of irony original heroic… and rightly shed is ugly and ordinary, but its bricks and windows are also symbolic…. ”

With this explanation by Venturi, we can see that this architectural movement did not search for beauty. Postmodernism brought back the classical features of Architecture to the 20th century, even as unnecessary decoration. Thus, the elements of the Italian Renaissance and the Ancient Rome reappeared, often used in a contradictory or even ironic way. As you can see, behind this style there is also a strong intellectual movement.

To conclude, I hope you want to see more Postmodern buildings in the next posts. Even though the Guild House is not a beautiful model, if you visit Philadelphia you cannot miss this Architectural icon.