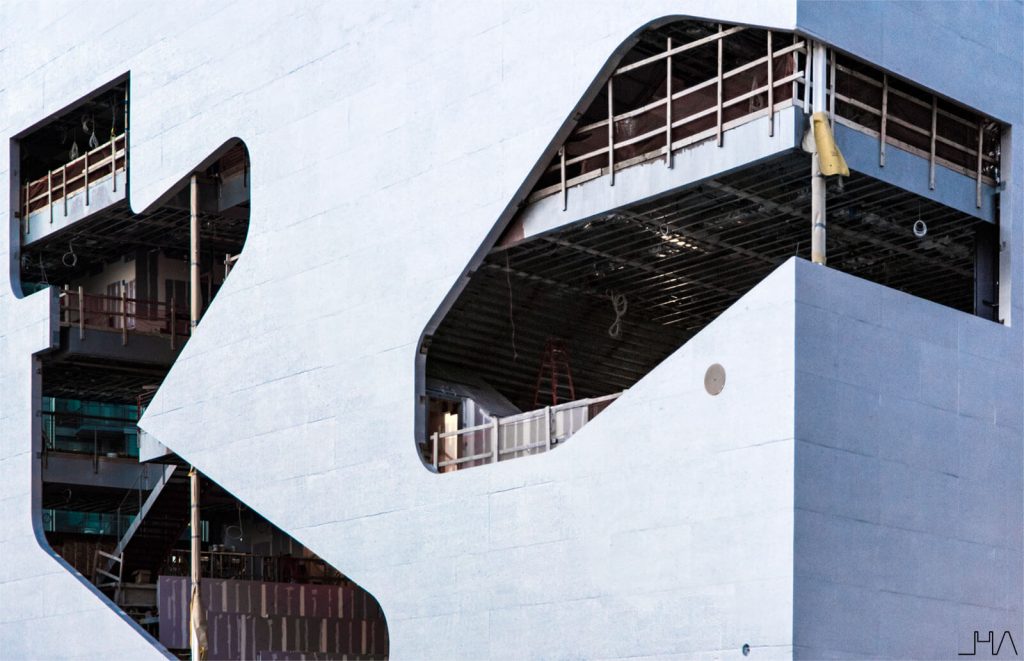 In my last post we saw a house conceived as a piece of art -the Rietveld House-, but the building I bring today does not lag behind. I am talking about the Hunters Point Library by the well-known architect Steven Holl. Do not miss it standing on the East River bank as if it were a sculpture.

Let´s go to the job site

For the first time I show you a building under construction. I would not venture that the work progress ends up mitigating the strength of the concrete facade. It now looks like a beautiful carved stone block.
I hope that it does not lose that charm when the windows and veneer are installed. Keep in mind that the final appearance of the building can still change a lot.

A few months ago I was fortunate enough to see Steven Holl himself talking about his library. It was thanks to a public program of talks hosted by the Noguchi Museum -you can see the video here-.

Besides talking about the difficulties of the project and other items, such as the long delays of the construction process, he also explained us some interesting details. Could you imagine the entire façade of the building covered in plastic bubble wrap? Well, that was Steven Holl’s idea for texturing the concrete, but it could not be done due to budget issues.

The chosen place for talking about the project was a hit. The Hunters Point Library could even be placed among the beautiful sculptures by Isamu Noguchi.

What about the interior of the Hunters Point Library?

I can not tell much about its interior, but I can assure that the views will be striking. The huge holes on the façade will frame the famous Manhattan skyline. Undoubtedly, this will be the main focus from the interior.

It seems that we will not be able to see it until early 2018, when the Hunters Point Library will finally open its doors to the public. Trust me when I say that it will not be long before I visit it. I just hope that by then it still has the interesting appearance of cavern currently given by the façade.