Which architect has never dreamed about doing someday the well-known Le Corbusier Route? As could not be otherwise, I had been in that group for a long time. Thus, using some days of our Easter holidays, we set out on a road trip to look for the work of this great architect. And here you have our first stop, one of the most moving buildings by Le Corbusier, the Couvent Sainte Marie de la Tourette, close to Lyon. 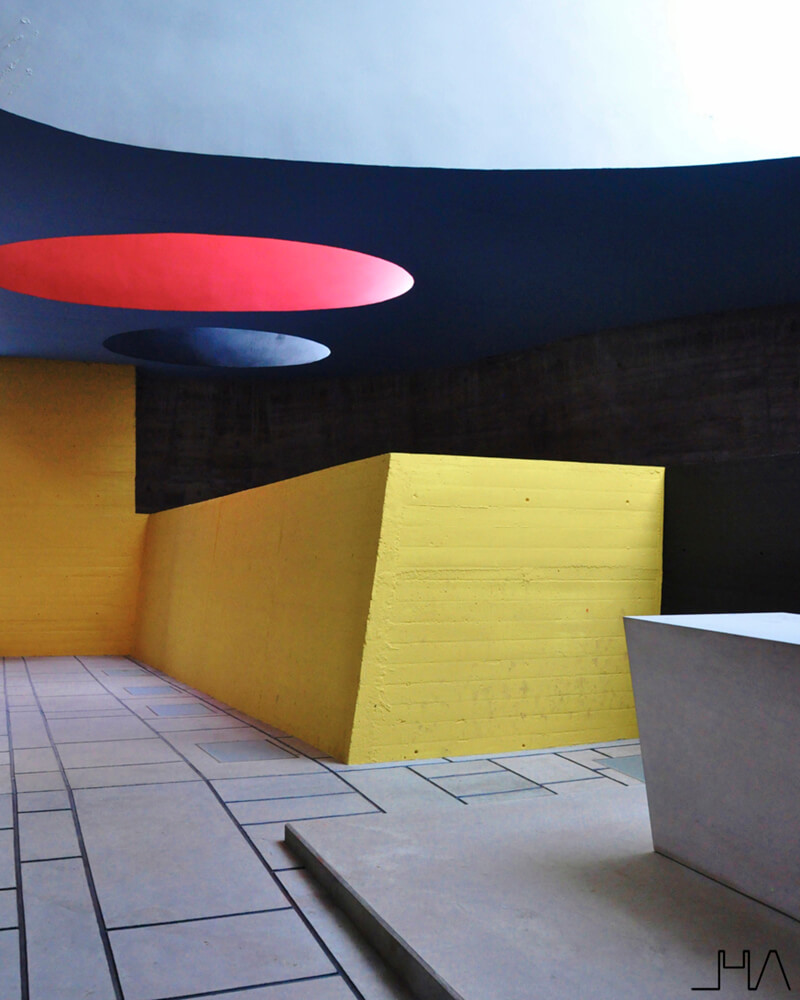 Let’s start by learning how did this project arrive to Le Corbusier, who aside from being agnostic, did not want to work for the Church. It was not until 1950 that he did it, when Father Couturier convinced him to reconstruct the beautiful chapel Notre Dame du Haut, in Ronchamp.

This Dominican, who was the director of the magazine “Art Sacré”, had an important role in the renovation of Religious Art of the 20th century. When the Dominican Order decided to move to the outskirts of Lyon, Father Couturier wrote the following: “If you want a beautiful and strong work to show your admiration for the Art of nowadays, and your confidence in it, you should ask for the project to Le Corbusier, and he will not disappoint you…”. After these words, in 1953 the Convent of La Tourette was ordered to Le Corbusier, who accepted the job with no hesitation because of his love for monastic live. 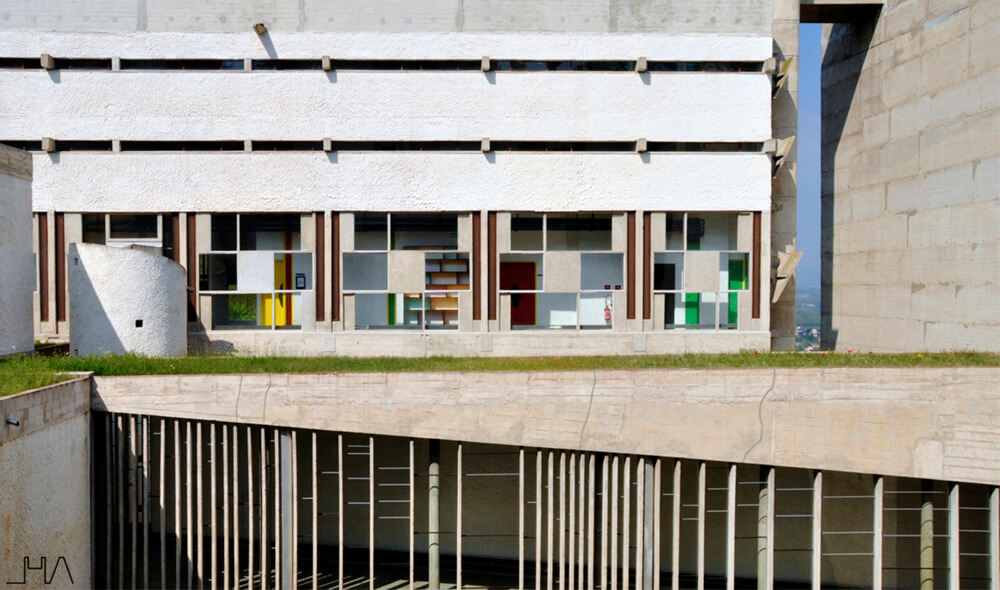 The fact that Le Corbusier was not a believer did not cause him any problem, but rather it was a challenge to understand a new way of life based on religion. He took one of the best examples of Cistercian architecture as a model, Le Thoronet Abbey, close to Toulon. As in this case, Father Couturier told him that the building had to show poverty, one of the main principles of the Dominican order. Furthermore, the convent had to be an appropriate place to study, so that a comfortable temperature and silence were required -even though finally the building did not work well and consumed a lot of energy to keep it warm-. 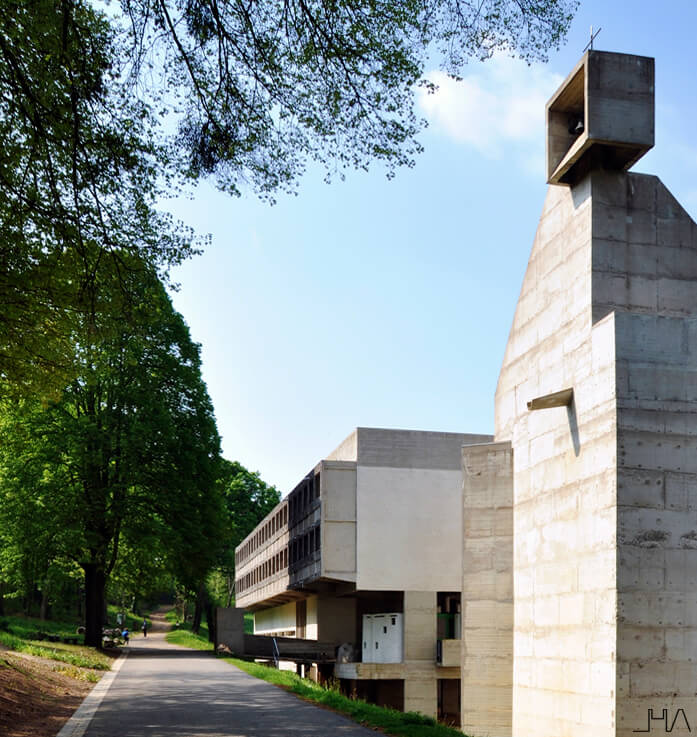 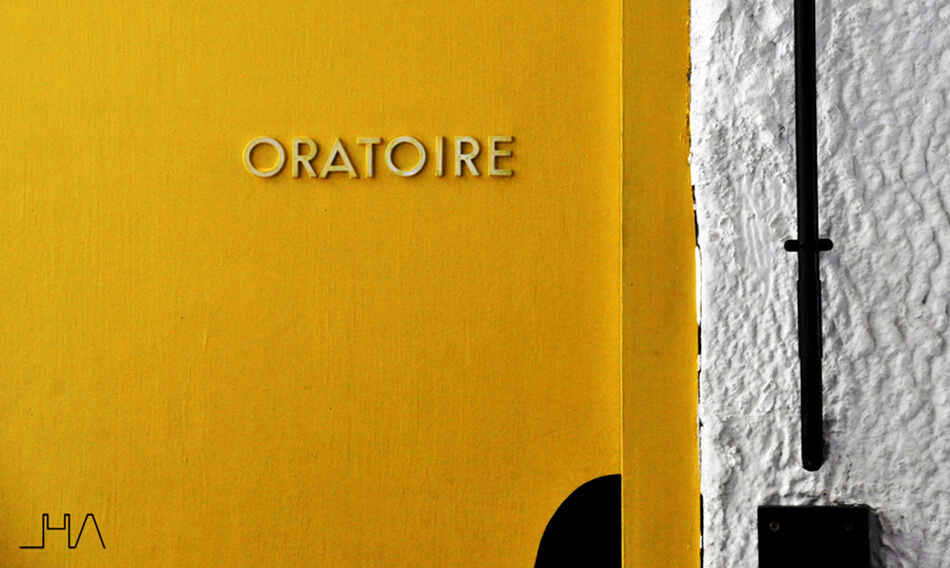 Under these requirements and right in the middle of nature, Le Corbusier projected a building in a pure and simple way, strictly following the proportions of Le Modulor -a measurement system created by himself, which was based on human body-.

The location is really beautiful. La Tourette is opened to the landscape and it makes the most of natural light and the incredible views. Due to that fact, Le Corbusier thought that the common cloister was not necessary, as brothers could enjoy nature in the surroundings of the convent. Thus, the central area is used to place his promenade architecturale –which we already saw at IMO-, and he put right here some corridors of the floor -1. 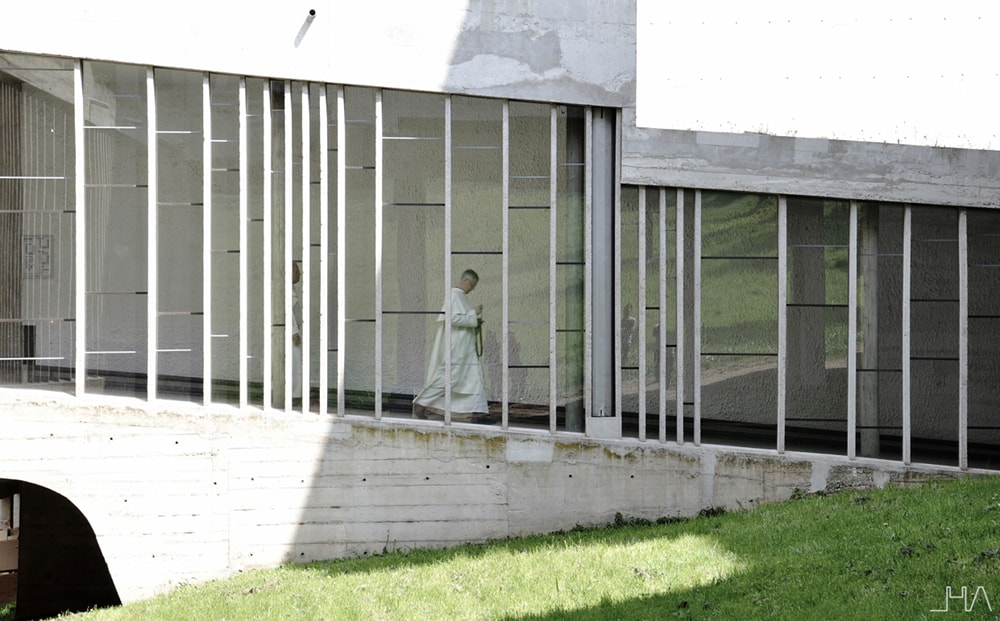 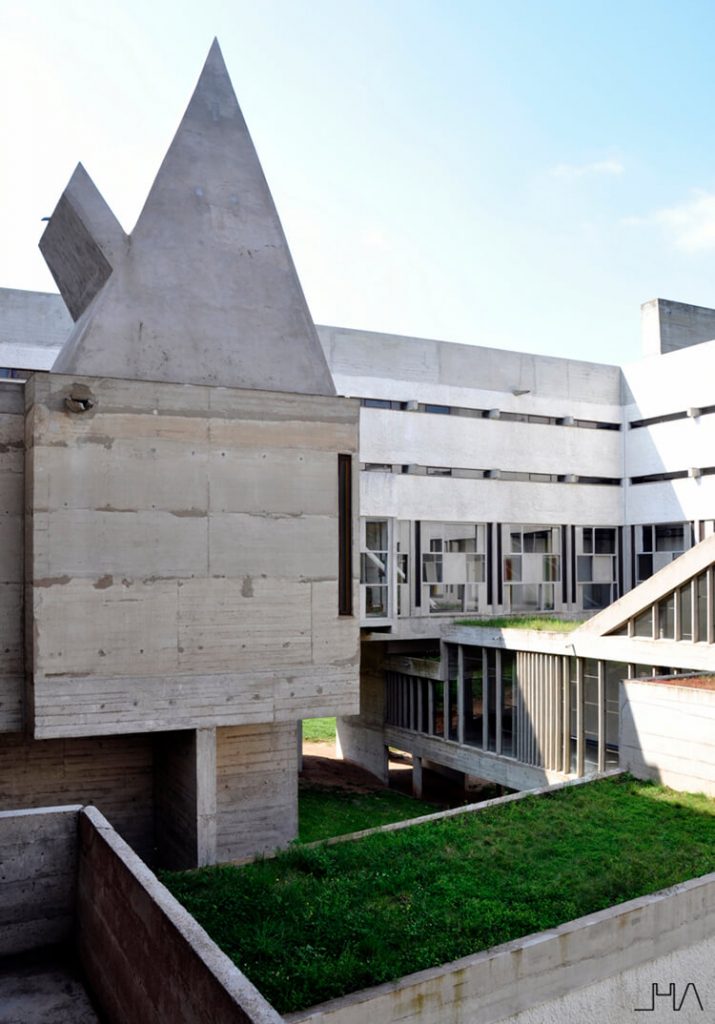 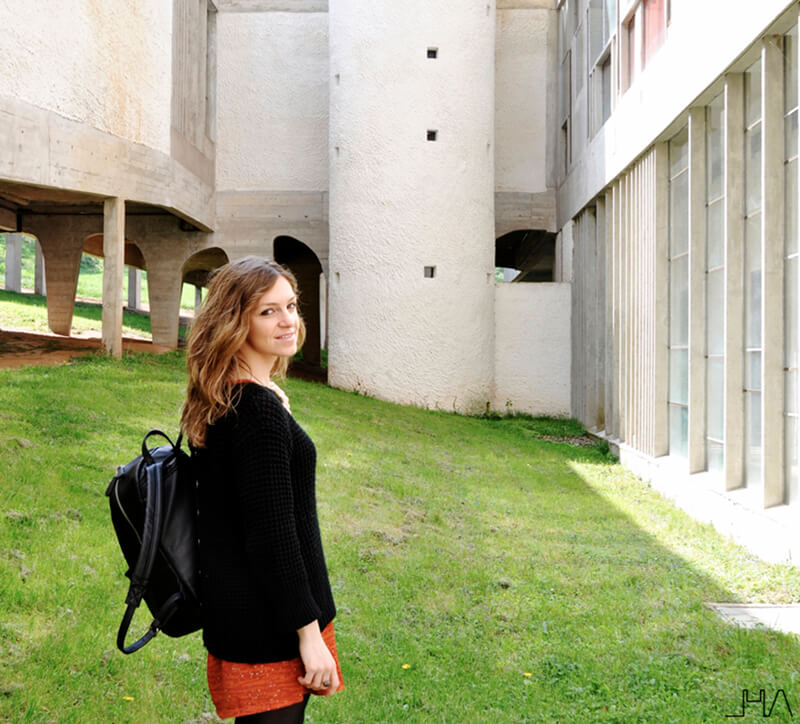 Maybe the Convent of La Tourette reminds you of the Unité d’Habitation. The truth is that Le Corbusier took the minimum unit, which he had carried out in his dwellings in Marseille, and he used it for the Dominican cells. These ones, which have the proportions of Le Modulor, are 1’83 m or 2’26 m of width, depending on the user, by 5’92 m long and 2’26 m height. All of them have a loggia -balcony- to allow the contact to the outside, and to look for the sun and views from the room. Each one has only the strictly necessary: a bed, a chair, a table, a wardrobe and a toilet. In spite of the austerity, the brothers appreciated very much the wonderful conditions of their cells. 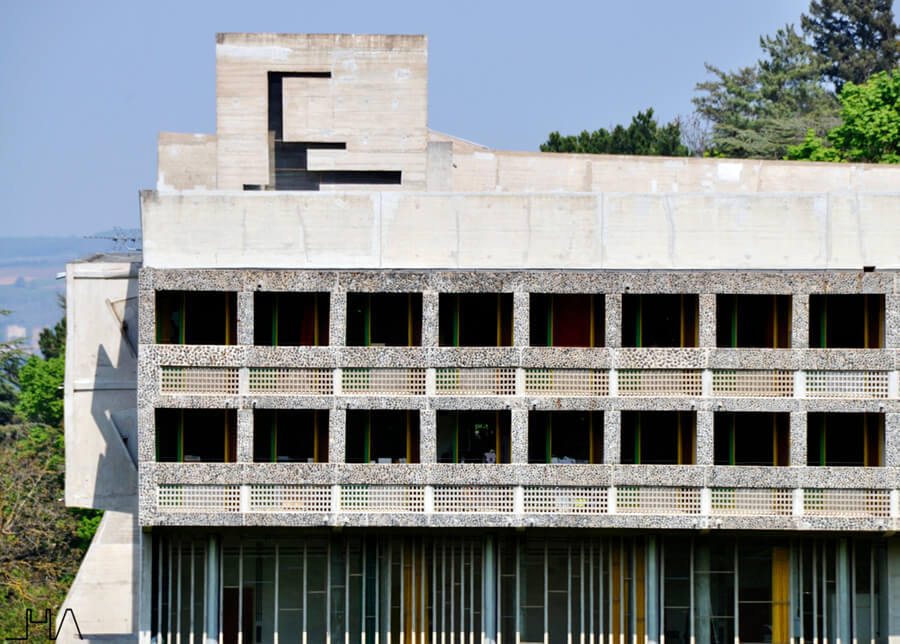 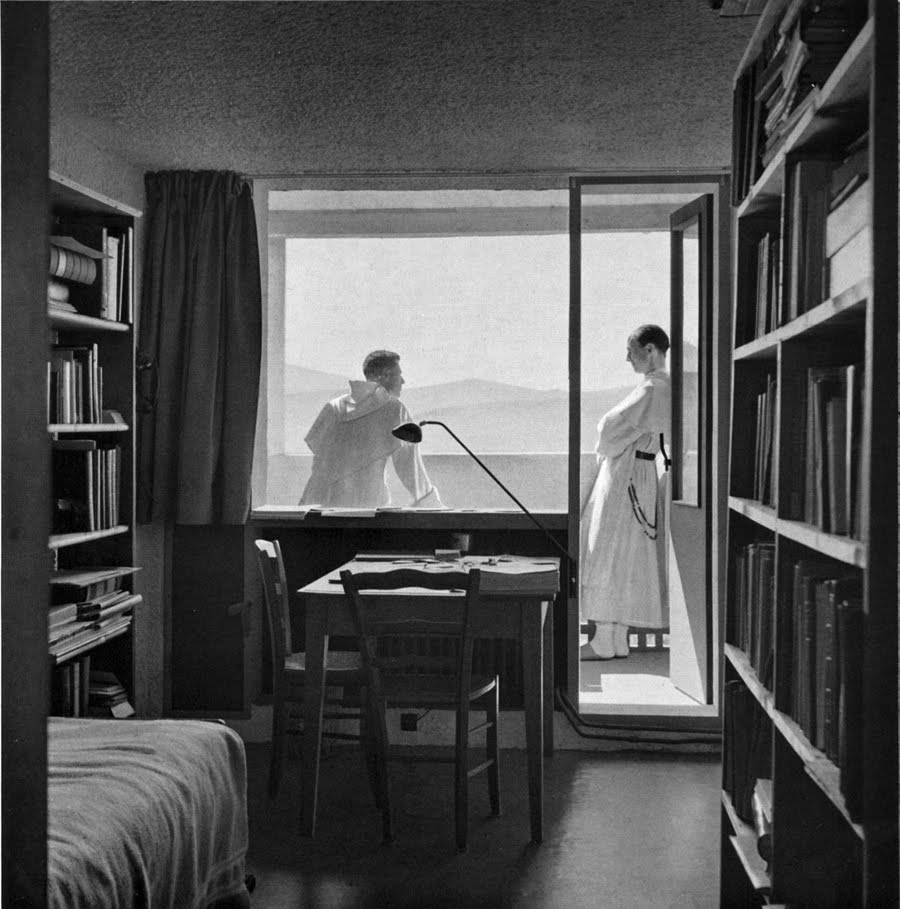 And now, we come again on the building as a whole. It is placed on a slope, and it does not surpass the trees height which are just in front of the building. Le Corbusier divides the living area of the convent –which is placed on pilotis- from the independent box of the church, defining a square floor plan. The convent and church are only connected in two points: by a corridor that leads to the inside part of the church, and by a footbridge which connects both roofs. This second area is really important, as the roof of the convent is a very special place. 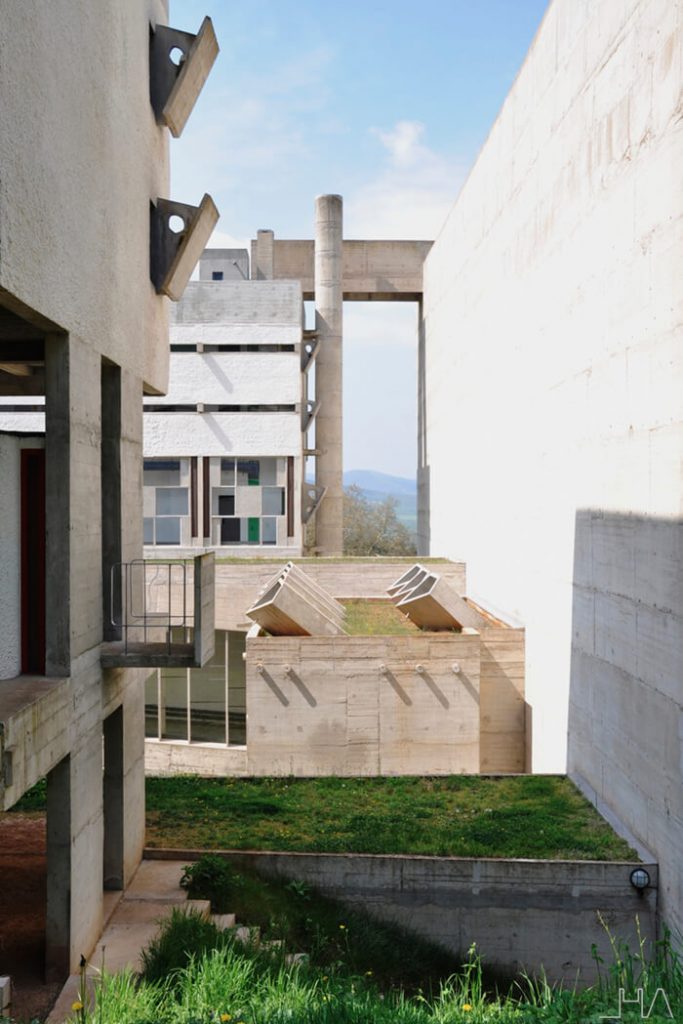 As we could already see at the Weissenhofmuseum visit, one of the main points of Le Corbusier’s architecture was to use the roof of the buildings as a garden terrace, in order to be another useful part of the building. In La Tourette, the roof becomes a place for reflection. In fact, the architect encourage the brothers to go up to be closer to God. To promote this spiritual relation, the roof is covered by a thin layer of ground where, thanks to wind and birds, it grows a natural vegetation surface. Furthermore, Le Corbusier decided to raise the terrace walls up to 1’83 m, so that the wonderful landscape views are blocked and the users are forced to look up towards the heaven.

Even today, this area is reserved exclusively to the brothers who live in the convent. I talked to our visit guide, but it was absolutely impossible to access to this wonderful place. It was just a pity, as it was one of the parts that I wanted most to go around.
Now I will show you a spectacular photo of the terrace by Richard Pare, so you can understand me better. I saw part of his work in a recent exposition about Le Corbusier, and I must say that it is amazing. 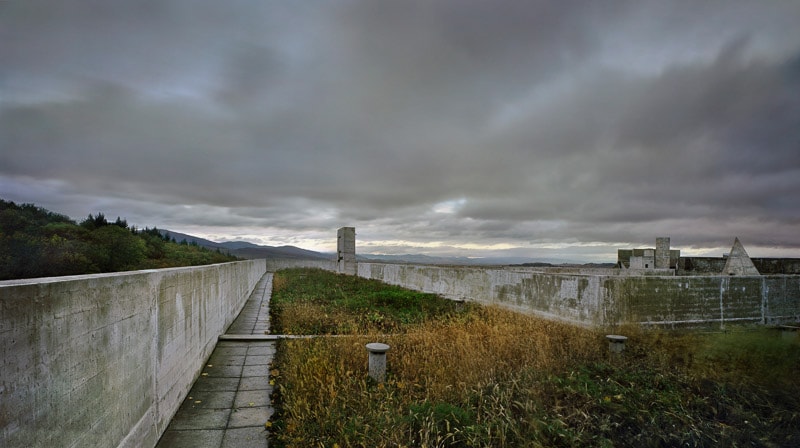 During the visit, we could see some of the spaces which are part of the brothers’ daily life and guests, as it is possible for common people to stay in the convent cells. In the beginning, the convent was supposed to accommodate a hundred brothers. Nevertheless, even if in the best moment there were eighty brothers living there, nowadays there are only about ten. So, the rest of the rooms are used to host people for meditation, and it is the only way to see the cells.

Our visit guide showed us some details about the areas that can be visited: the study room, a little chapel, the refectory –dining room-, corridors and living spaces and, as could not be otherwise, the wonderful church. In a very peaceful environment, and with brothers going across the corridors, the refectory was the place which amazed me the most. From this room there is a spectacular view of the landscape through an incredible wall made of glass and concrete. This is the inside part of the façade made by Iannis Xenakis. 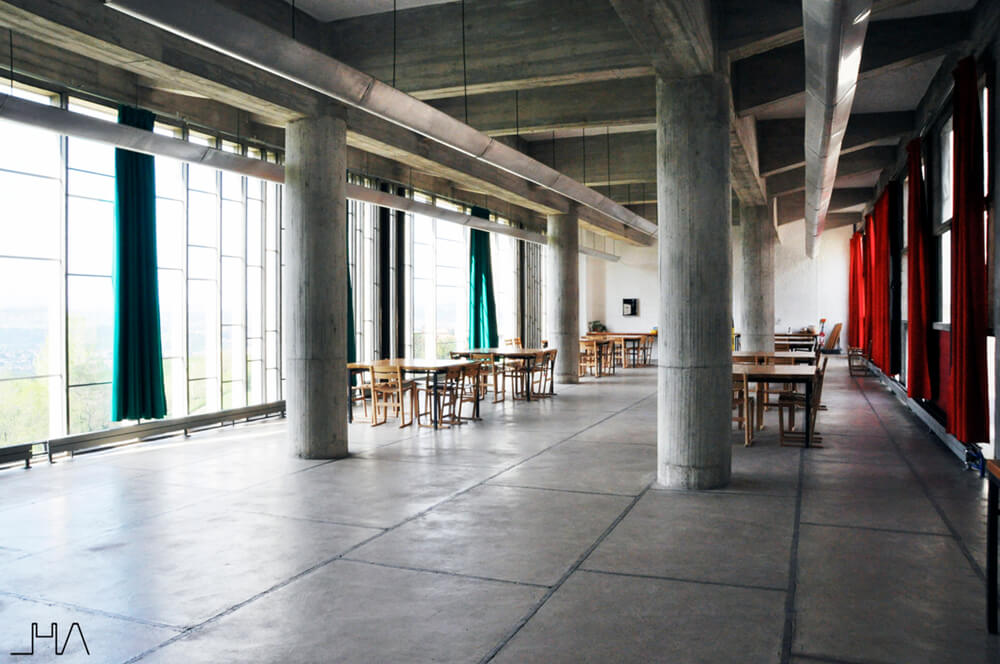 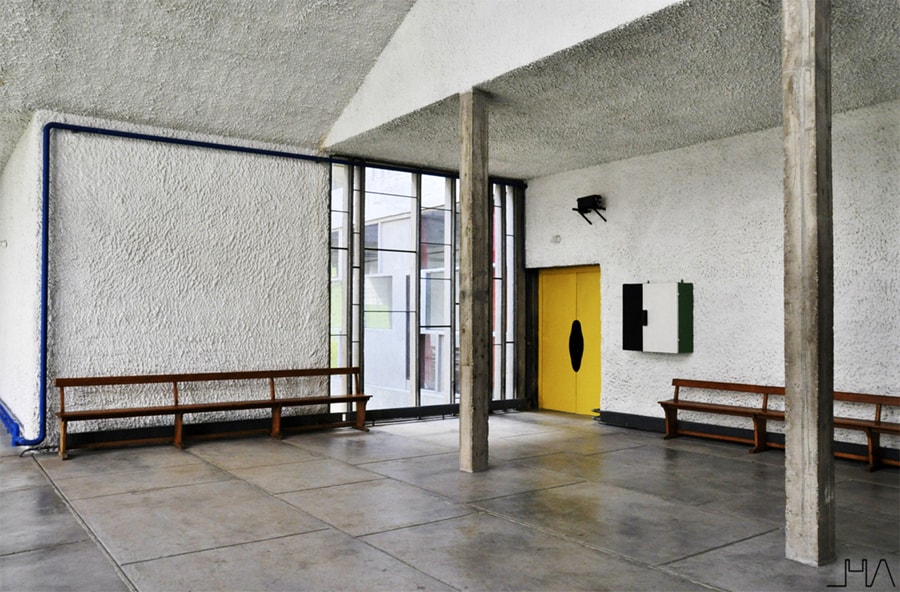 Actually, Xenakis was a very important piece in the construction of the Convent of La Tourette. Just at that time Le Corbusier was also projecting the city of Chandigarh, in India, and Xenakis took care of the construction.

Not only was Xenakis an engineer but also a good music composer. His music piece Metastasis shaped the glass panels that appear in the collective and study areas, and in the corridors. The distribution of the panels comes from a random statistical programming, to shape thin membranes of reinforced concrete which separate the glass without frames, and always independent from the supporting structure. 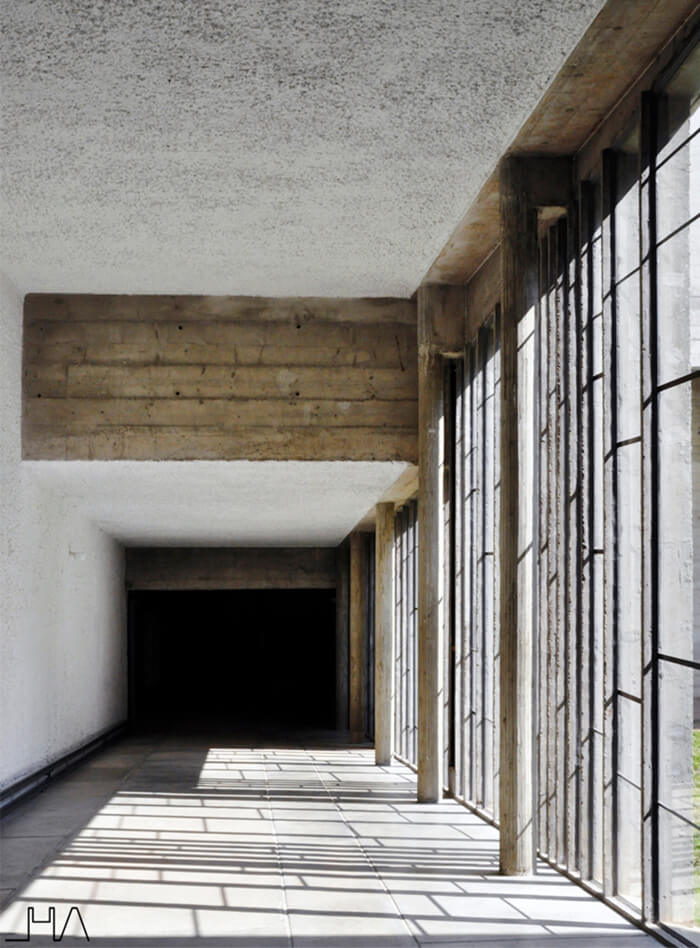 And to conclude the visit, we went into the church, one of the most exciting buildings by Le Corbusier. It is an overwhelming box of concrete absolutely made under the proportions of Le Modulor, where austerity is present everywhere. We do not find decorative elements, there is only a bare space where natural light is present all the time, and very well controlled. Light is employed in a very accurate way, always indirect, and so it creates a warm space which is sprinkled with color.

Now, pay attention to the horizontal openings behind the pews, nearly imperceptible from the exterior of the building. They are placed in a very clever way, as they allow brothers to read during the religious ceremonies. 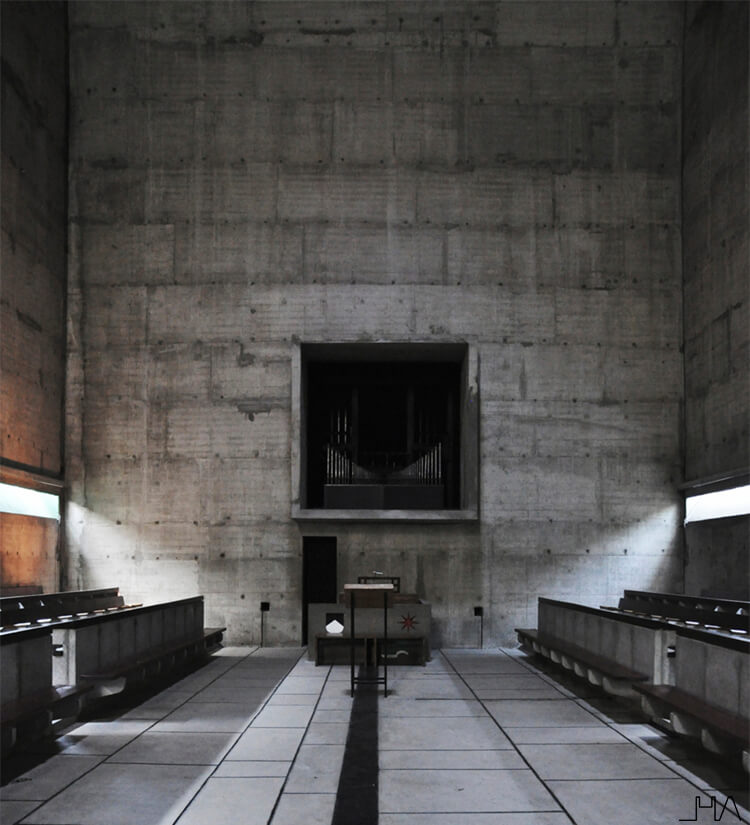 Inside the church, nothing is casual. In fact, the total volume of the church is the addition of the cells all together. With this, Le Corbusier wanted to demonstrate that every brother had his place inside the great volume. The floor and the big cross, placed next to the main altar, are also under the proportions of Le Modulor. But there’s even more, as the church is completed with two lateral volumes: the sacristy and the crypt. 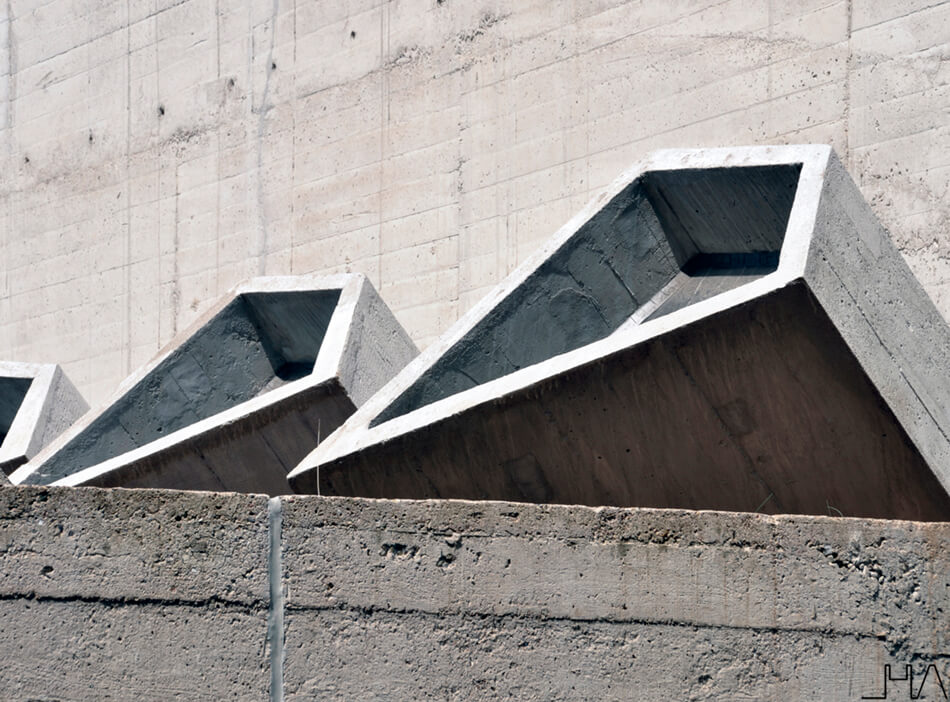 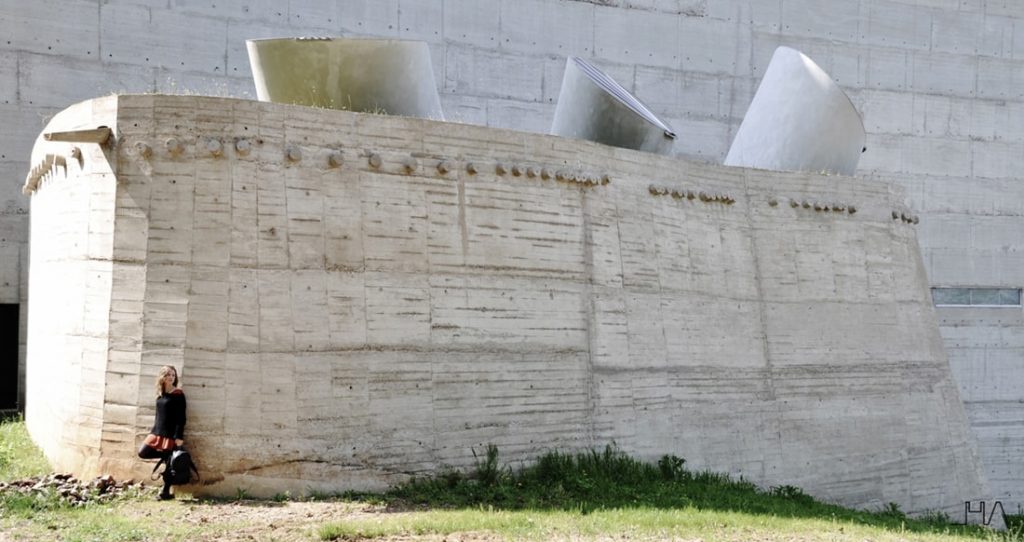 On the one hand, the sacristy is rectangular. On the other hand, the crypt has a curved shape, and so it is called the “ear”. This spaces are placed one in front of the other, and they are separated by the church nave, where we can find the main altar. 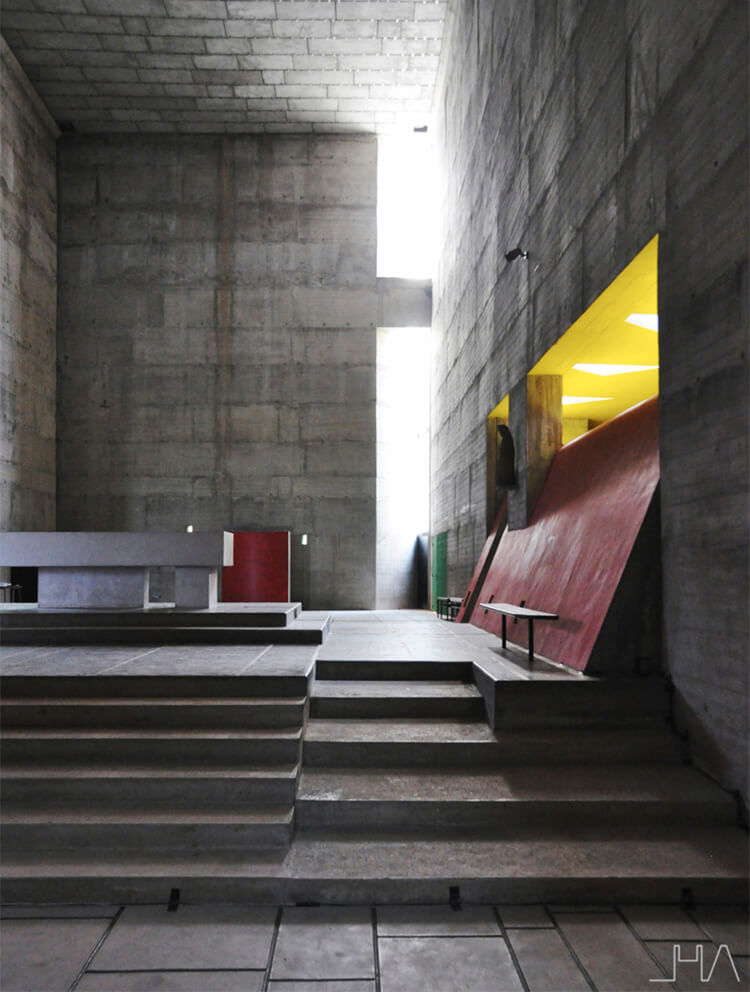 As much the sacristy as the crypt have natural light, and they provide a very special atmosphere and plenty of color to the church nave. The skylights placed on the roofs bring a beautiful zenithal lighting, and it runs down the leaning red wall of the sacristy, softening the sobriety of the main altar.
But it was the crypt, with its three cannons of light, what shocked me the most once inside the church. The combination of pure forms and primary colors under a heavenly light, creates a moving space full of power. 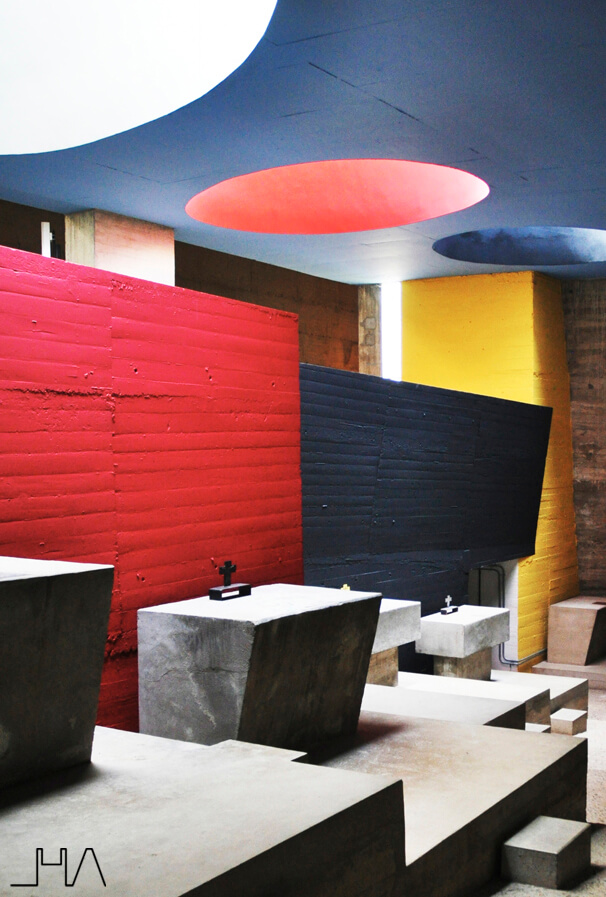 Le Corbusier accepted the integration of only 3 religious elements: an image of the Virgin placed next to the sacristy, a small sculpture of Christ in the crypt, and the big cross in the main altar. Due to this sobriety and the big volume, there is a reverberation of 7 seconds inside the church. This is not very appropriate in a church, but it creates an overwhelming atmosphere.

I would like to finish this post with some photos and a video, which cost me some stumble. I walked away from the building in order to have a better perspective of the surroundings, walking through the vegetation. So, I could enjoy a spectacular view. 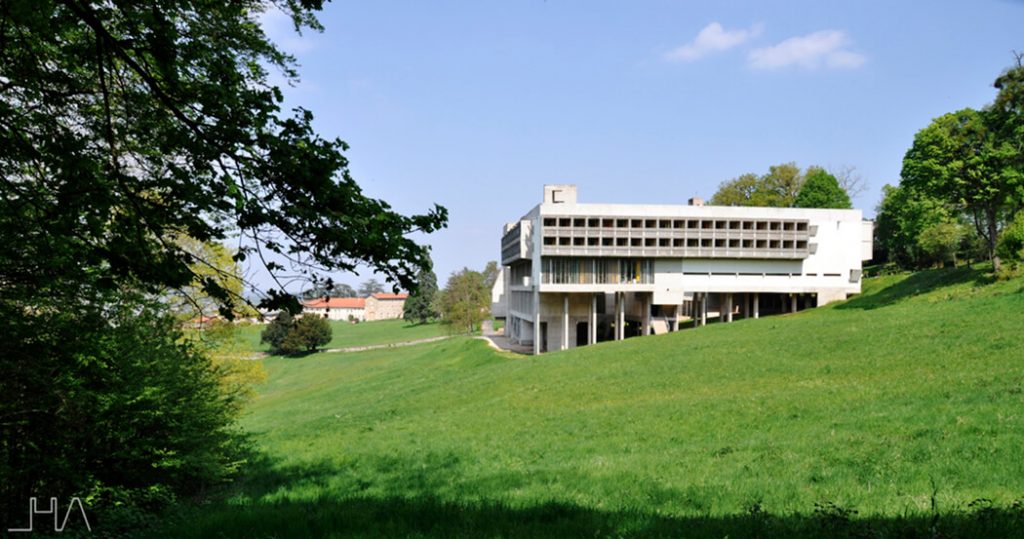 One can appreciate the relation between the building and the landscape better from the distance. The Convent of La Tourette touches the ground in a very hard way, but with complete respect for nature. Even if the building is placed in a sloping ground, the concrete façades have an important horizontal appearance, gaining two new floors on the West façade.
In the East, South and West façades there is a repetition of the individual loggias of the brothers cells, placed on pilotis. Nevertheless, the North façade is a huge and blind wall which belongs to the church, only modified by the famous volume of the crypt. 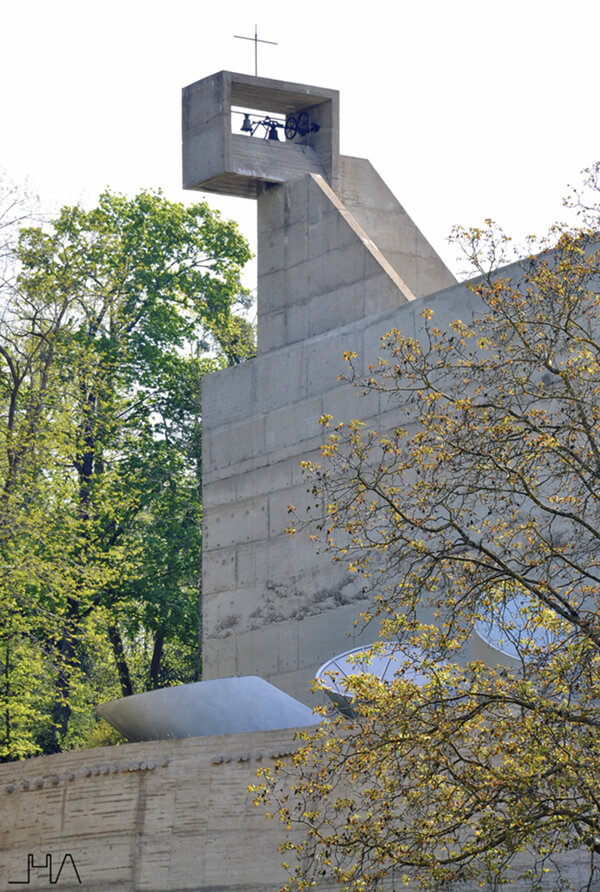