LA ROTONDA. The perfect fusion of nature and architecture

Two years ago we decided to spend our holidays in the north of Italy. I wanted to visit the work of Andrea Palladio, so we had to go to Vincenza, a little town from the Véneto which hosts some of his buildings. I had no doubts about the building which I wanted to visit in the first place, so there we were very early in the morning, at La Rotonda. This is one of the most important works that this great architect built, and it has been a perfect model on countless occasions. 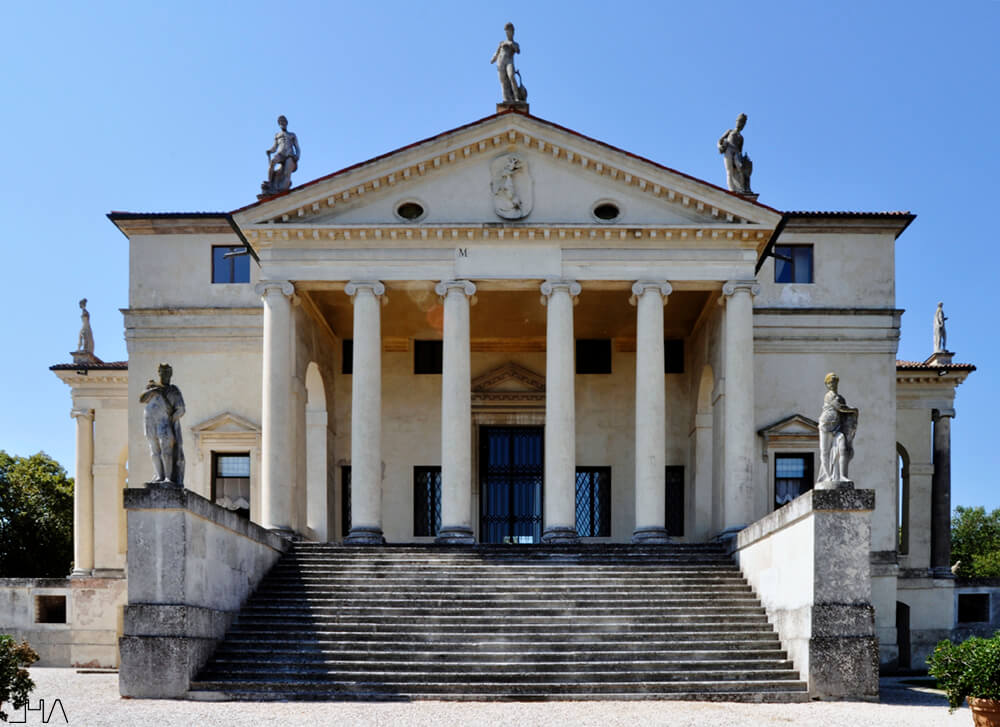 Once there, and under an august burning sun, we took the way which leads to the idyllic villa. But instead of telling you my own experience, I prefer to quote Palladio’s own words. In his second book of  “I Quattro Libri dell’Architettura”, he described this fantastic place like this:

“The site is one of the most pleasing and delightful places that one could find because it is on top of a small hill which is easy to ascend to; on one side it is bathed by the Bacchiglione, a navigable river, and on the other it is surrounded by other pleasant hills which resemble a vast theater and are completely cultivated and abound with wonderful fruit and excellent vines; so, because it enjoys the most beautiful vistas on every side, some of which are restricted, other more extensive, and yet others which end at the horizon…”.

I am sure that now, after his words, you can really imagine the excitement than one can feel arriving at the Villa. This is a quiet place and there are few people, perfect to relax and to stroll, while enjoying at the same time this beautiful example of Renaissance architecture. 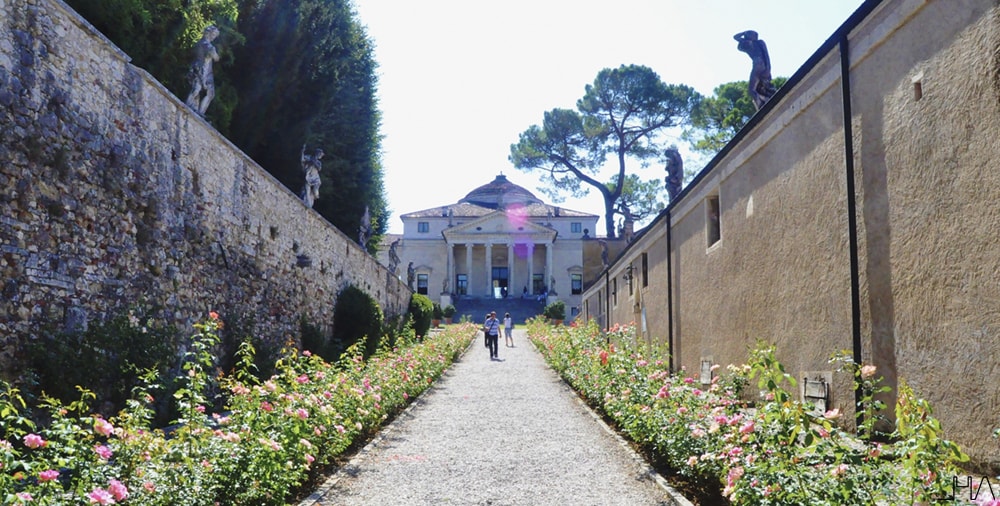 Now that we are already feeling the atmosphere, we are going to get to know a little better this kind of civil architecture, which became so popular throughout the 16th century. Villas are rural buildings belonging to wealthy families. Not only were they a countryside house but also a center for agricultural production, with croplands, vineyards, and even stables and storehouses.

The Palladian Villas became very famous amongst the Venetian bourgeoisie who, apart from having a palace in the city, did not want to miss the benefits of living in the countryside. This is what Palladio said about them: “Although it is very suitable for a gentleman having a house in the city (…), the biggest efficiency and pleasure will be provided by his house in the countryside, where he will enjoy seeing how the land increases its wealth or going for a walk or riding a horse, and where he will maintain his body healthy and strong, and his mind will rest from the city weariness, either with peacefulness, studying, or looking at the nature”. 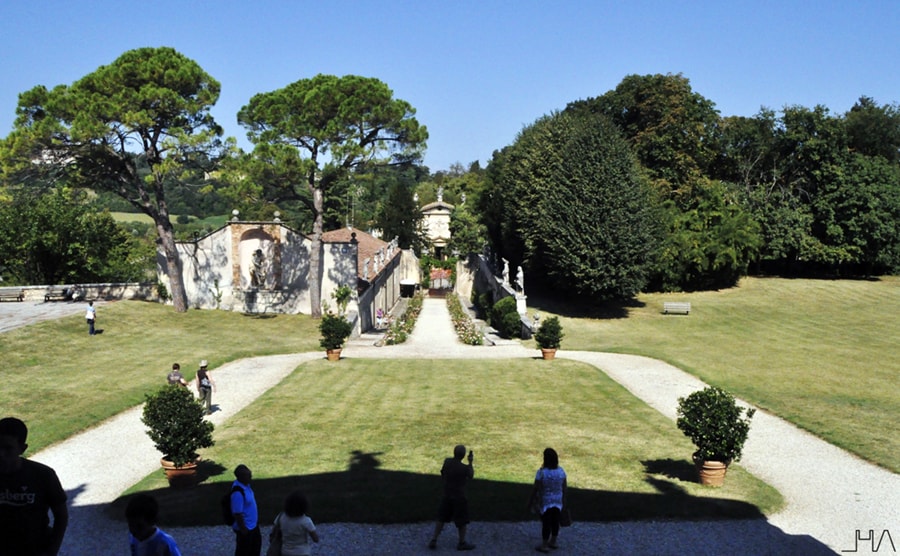 There were more than 20 Villas built by Palladio in the Véneto region, and nowadays they are World Heritage sites. The Villas are inserted in the landscape, and they produce a harmony between the solid volume and the natural space which surrounds them. Their stunning façades have a classic style and are dominated by columns and gables. They are open to the landscape to enjoy the views from the inside part of the villas and their galleries.
Amongst all of them, the Villa Capra, another name used for La Rotonda, is the most important model, where nature and the architectural volume are fused under ideal proportions. 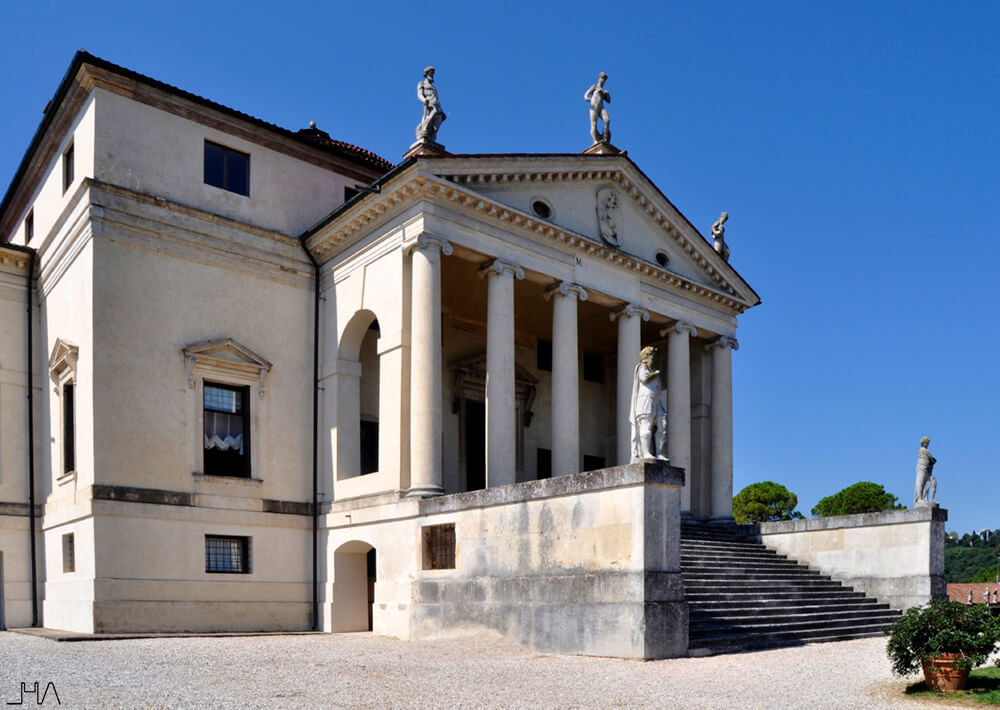 The beginning of Villa Capra was in 1565, when the priest and count Paolo Almerico retired from the Papal Court in Rome and moved to Vicenza. He considered that there was no need to have a big palace, so he commanded a countryside house to Palladio in order to be able to study and meditate.

Thus, the architect looked for inspiration in religious architecture, based on plans like San Pietro in Montorio, by Bramante. Finally, Palladio projected a building of square plan and utterly symmetric, organized by means of a central round hall. This particular room is covered with a domed vault illuminated by a central oculus, and it gives the famous name of La Rotonda to the whole building. All the other rooms are perfectly rectangular and are placed around the round hall, so that they can enjoy the beautiful views towards the landscape. 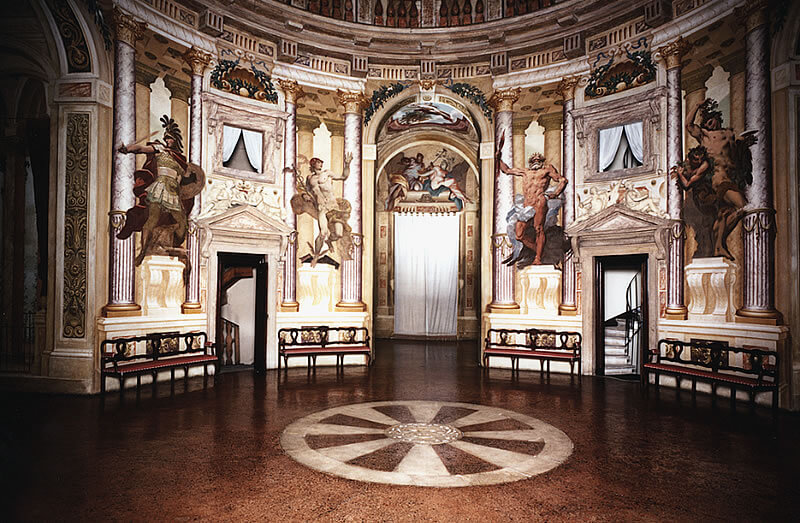 The interior decoration corresponds to the Italian Cinquecento period. There are magnificent frescos and stuccoes which represent religious scenes, and even an allegory about Paolo Almerico’s life, the first owner. The round central hall is the most spectacular, with balconies and incredible frescos which pretend to be colonnades and huge figures of the Greek mythology.

Given that unfortunately it is not possible to take photos inside Villa Capra, I have borrowed some of the interior photographs which are exposed in the official website of the building. I think that in this particular case it was absolutely necessary, as it would really be a pity that you miss the interior decoration. 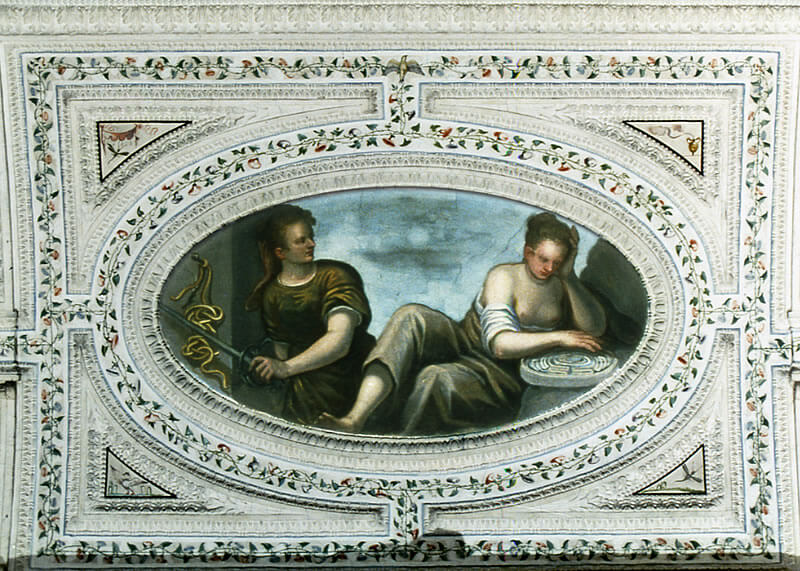 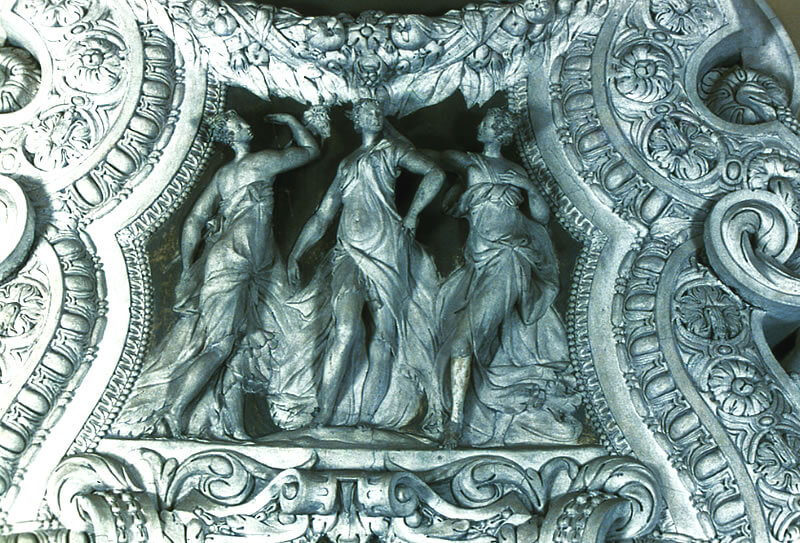 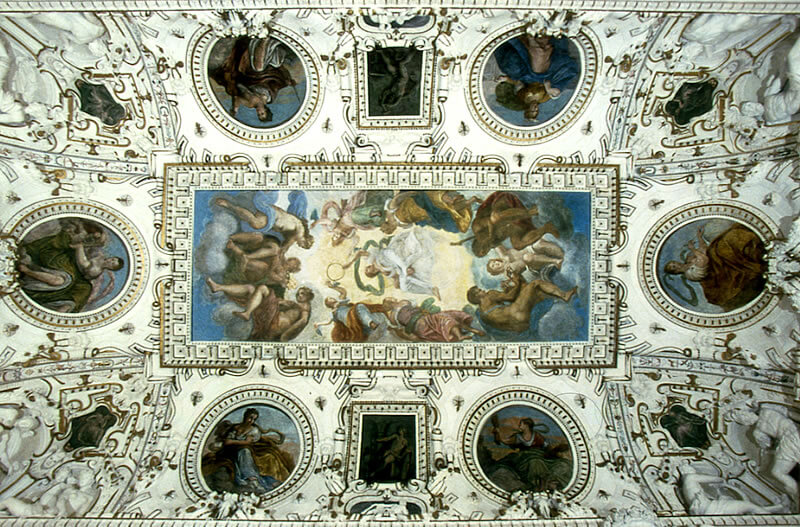 Once we had visited the interior of the Villa, it was the moment to enjoy the amazing exterior. The building is raised by means of a base, and each front has a big staircase to go into the house. The four façades are identical, except for the few variations they can have to adapt to the land, and they are inspired on the Greek and Roman temples. These are spun 45 degrees regarding the cardinal points, so that all the rooms are oriented in order to have natural light at any time of the day. Each façade has entablature and pediment supported by six ionic columns, which give way to the galleries, named loggias.

You will understand all this better with the photographs, and you will see that these interesting spaces are inspired on the classic pronaos, which is the entrance hall to the Greek and Roman temples. These loggias, used as meeting points and to rest enjoying the fantastic views, ends up to shaping a Greek-cross plan.

The Villa Capra follows the trend of the Mannerist Architecture, which ruled at the end of the Renaissance. This trend rejects the equilibrium and the harmony of the Classic Architecture, so that it seeks provocation by breaking the rules. In La Rotonda, the concept of unity and proportion were taken to the extreme by Palladio, and the Villa even loses its functional character. He follows a severe symmetry and so the traditional idea of the principal and only façade disappears, what is a clear example of provocation.

This Villa had the biggest influence in the neoclassic architecture of the 18th and 19th centuries. It was a source of inspiration for many buildings in Europe and the United States, and even for the White House. 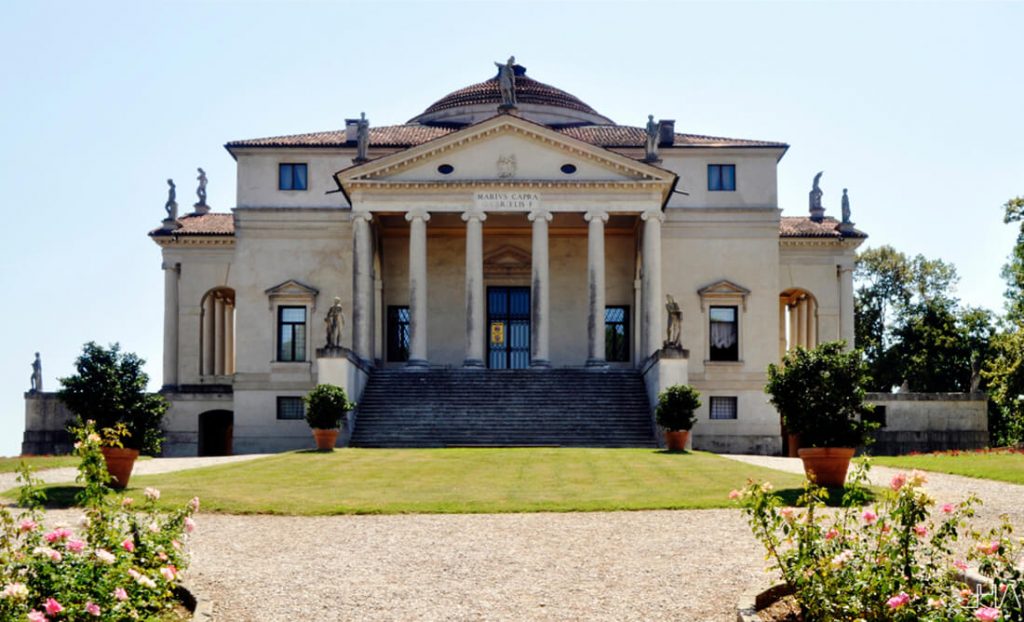 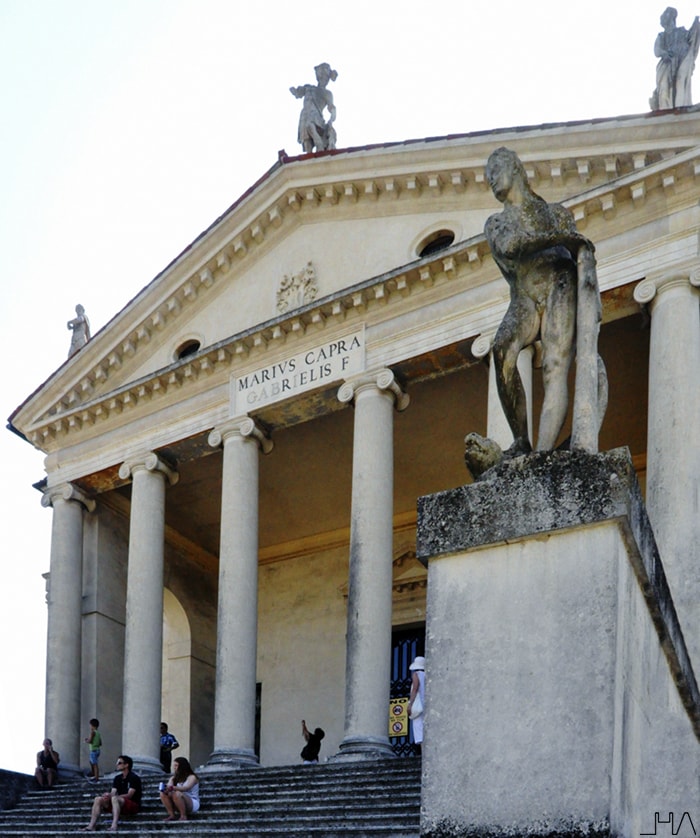 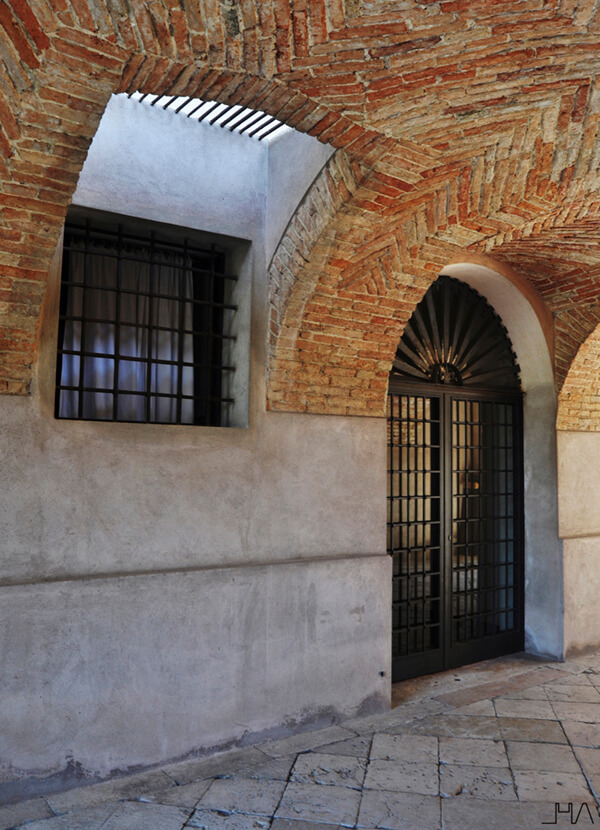 It is important to know that in 1585, five years later of Palladio’s death, Vicenzo Scamozzi was the responsible of finishing La Rotonda, and he introduced some changes. He was who included the oculus in the domed vault, being inspired by the Pantheon in Rome. He also built the rustic constructions apart from the main building, named barchessa, to allow the agricultural labour which was not considered in the beginning.

Scamozzi was not the only one, as the Capra brothers, who bought the Villa in 1591 and gave it the second name, were who provided the current interior decoration. Later, in the 18th century, some changes in the floor, the interior staircase and attic were carried out, although some years later the staircase was brought into the original form. 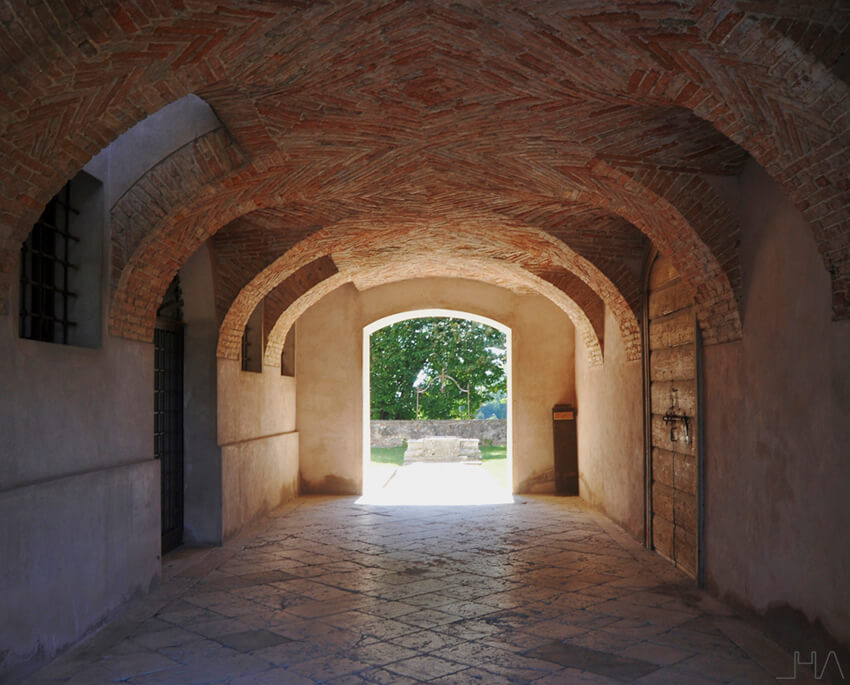 There is much more to talk about Andrea Palladio. Nevertheless, I hope that you have enough for the moment with his effort to take the idea of the palace to the countryside in his Palladian Villas. A part from being a great success, we cannot deny that this is one of the examples where the Architecture makes Nature even more beautiful. 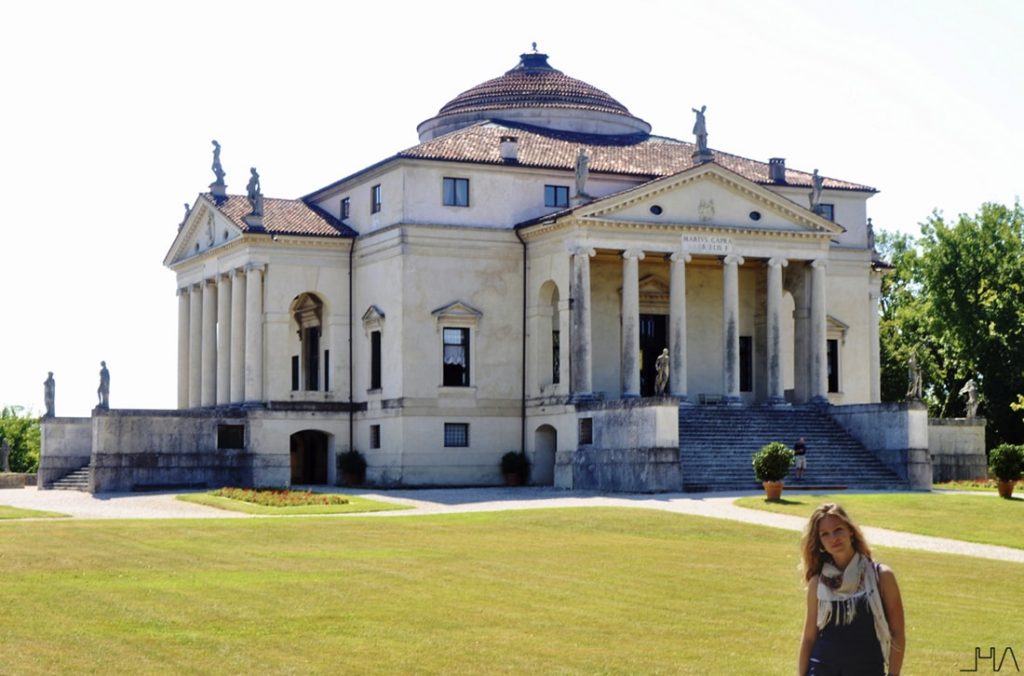