This time we travelled to Rotterdam to visit a fun and playful place. I’m talking about Kubuswoningen, a group of dwellings that are known as Cube Houses, and which at least are curious to see. 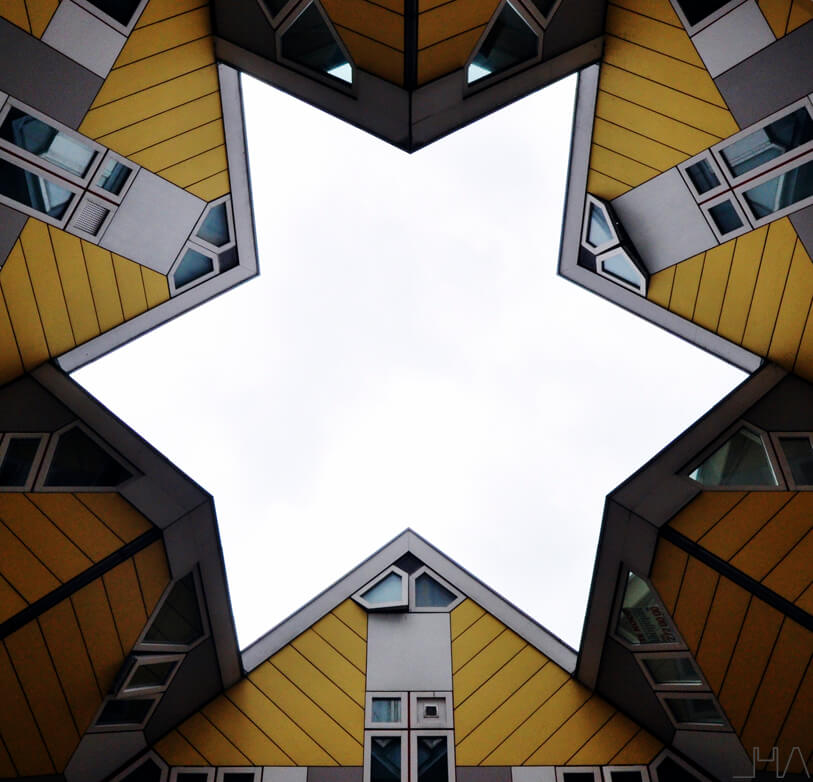 The architect who was in charge of this original complex was Piet Blom, who in 1977 got an assignment to study the surroundings of the Oude Haven -Old Port- of Rotterdam. The aim was to revitalize the whole neighborhood, which was unexploited since World War II, and generate residential areas, giving priority to social housing.
The idea of the technical department of the city council was to build a pedestrian bridge over one of the main traffic arteries, but it also had to include houses and shops. With Ponte Vecchio in Florence as a source of inspiration, Piet Blom was asked to “furnish” this bridge in Rotterdam. 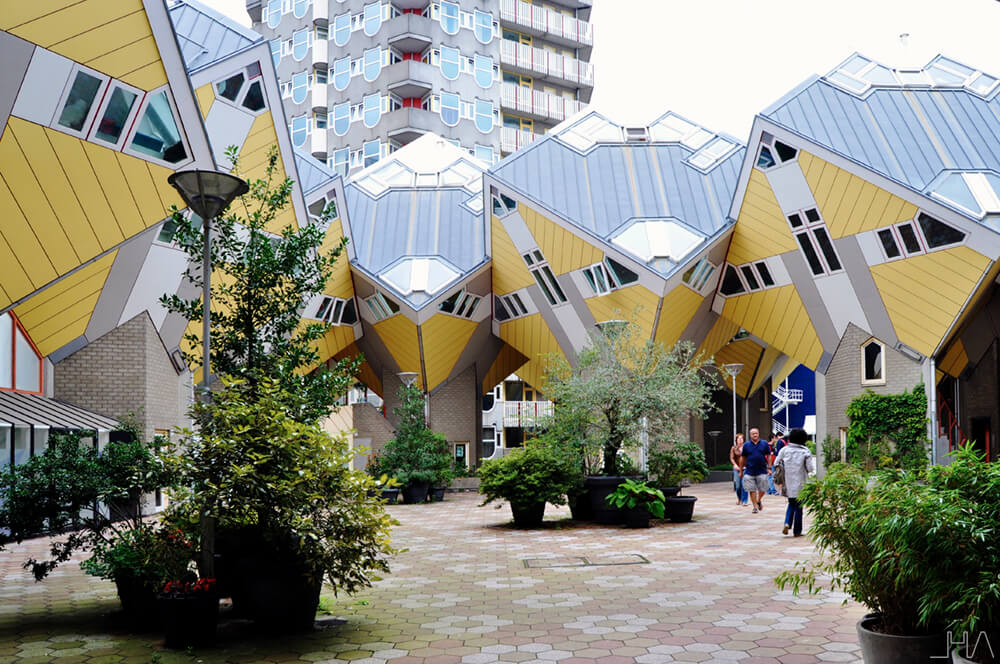 It was not until March 1982 that the construction of the dwellings started, due to financial problems. Nevertheless, the Dutch architect had already experimented with this model. He built three of this houses in Helmond in 1975 and eighteen more in 1977, in the same city.

Initially, Piet Blom presented a project for Rotterdam including 74 Cube Houses and a cultural centre. In the end, the complex had 38 Cube Houses, commercial establishments, a schoolbuilding, an apartmentbuilding and an apartment tower, which is known as Het Potlood -The Pencil-, really suitable for it. 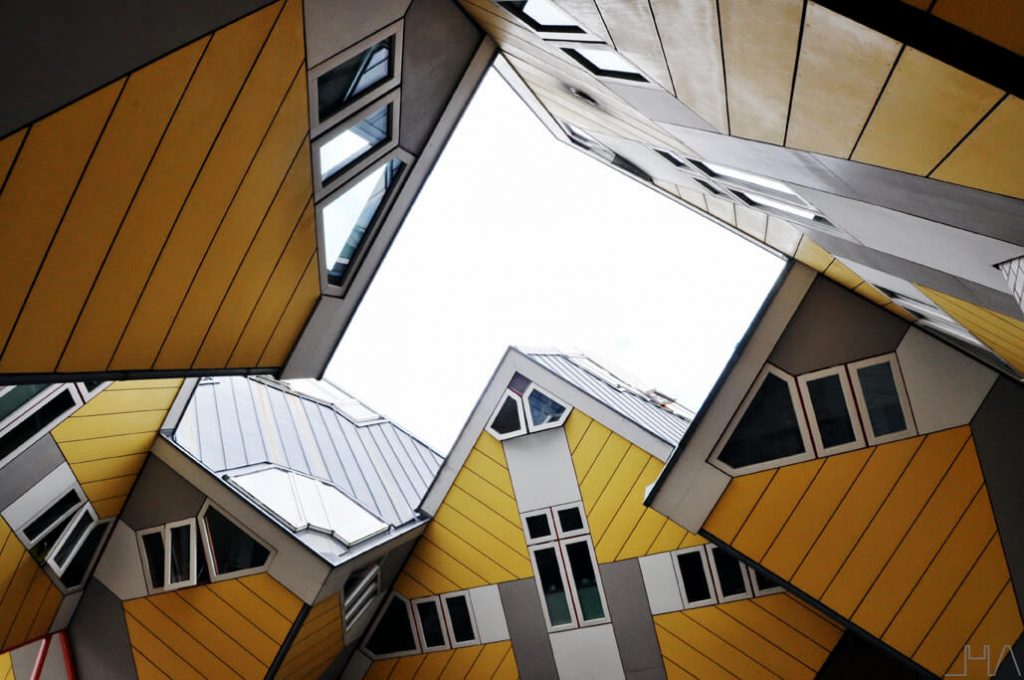 For the architect, the most important thing was to create a high density urban living where it would be possible to live in good conditions, so he raised the dwellings in Kubuswoning to free up urban land. Therefore, the public space is also inside the complex, and the organization applied to the houses allows to create open spaces with vegetation and to be able to go across the ground floor. 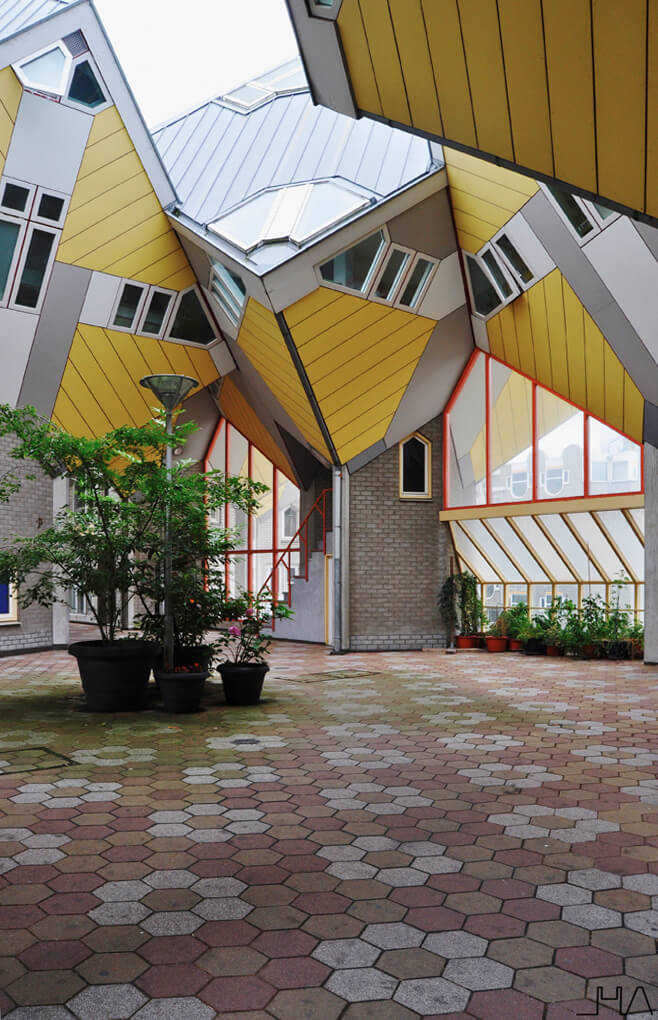 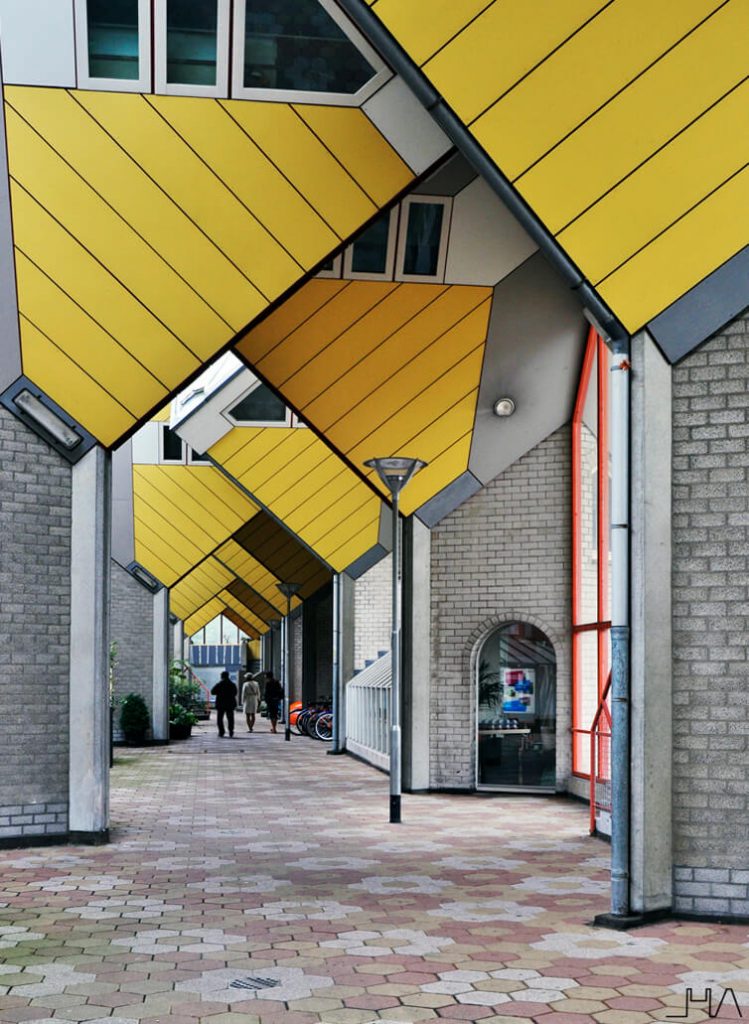 I must say that in the late 90s it was necessary to renovate the whole complex and the public space. The general appearance of Kubuswoning changed when the wooden roofs were replaced by zinc. 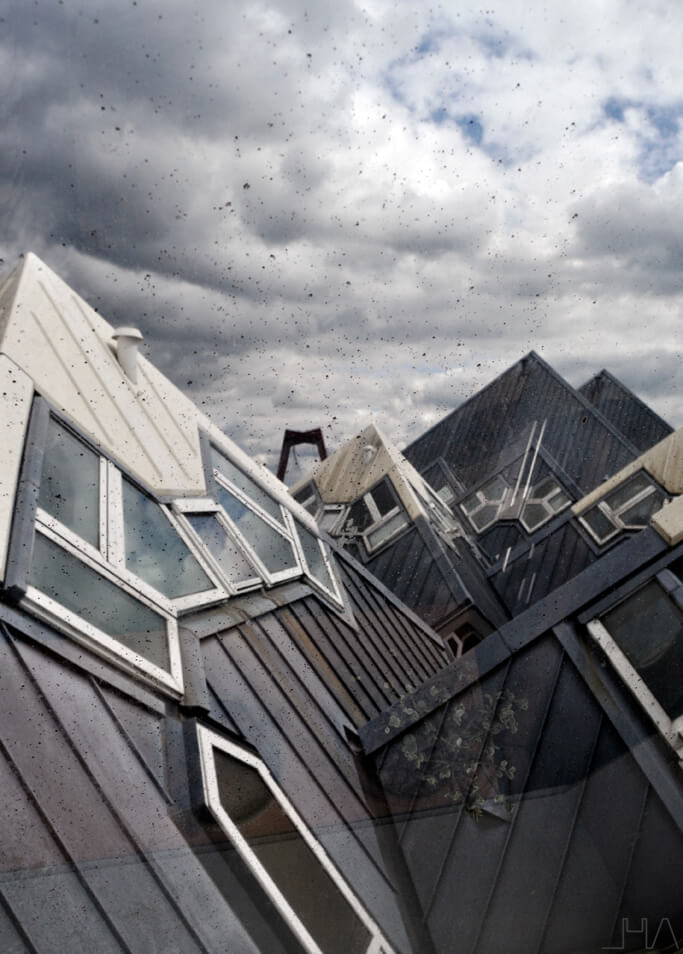 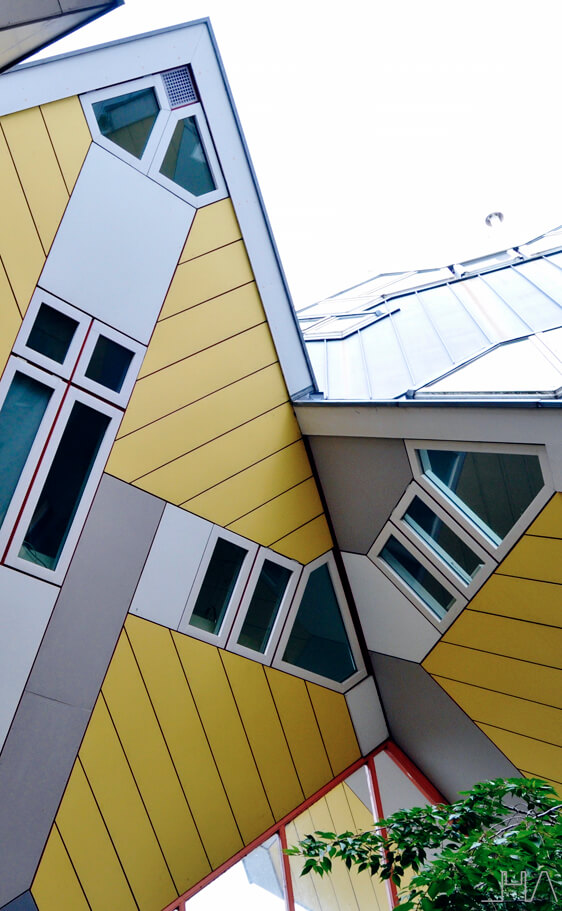 For this project Piet Blom took inspiration from nature: each Cube House was a tree and the whole complex represented a forest. The form of the tree allowed him to free up the ground floor, so he raised the dwelling unit and spun it around so that three of the sides are facing the ground and the other three are facing the sky. The “trunk” -or pole-, which has an hexagonal form, contains the staircase that takes you to the dwelling and a little storage room on the ground floor. 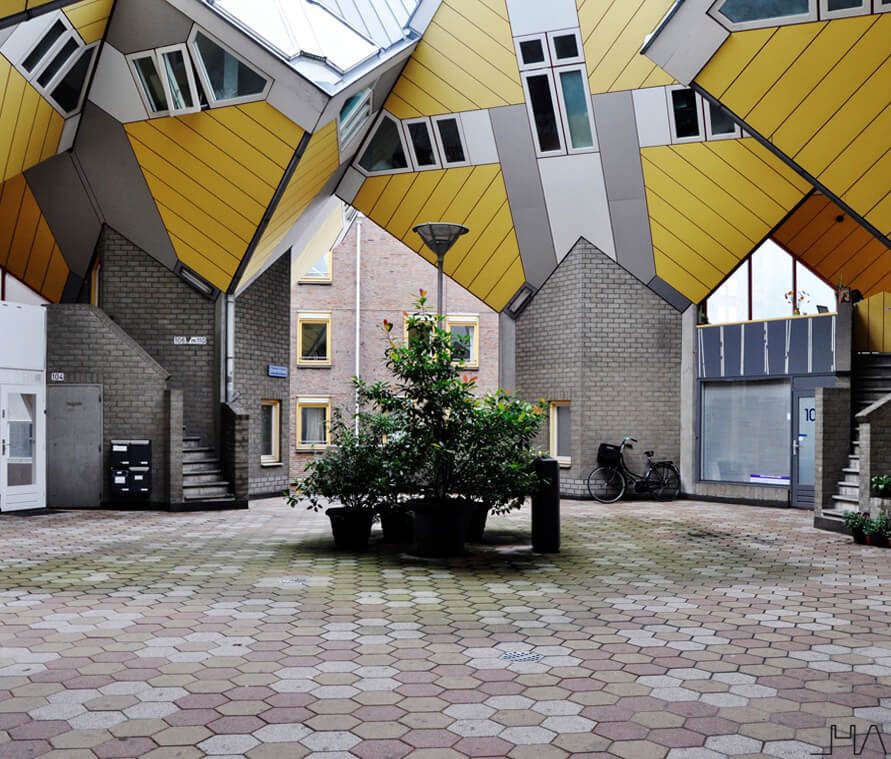 During the visit we could realize that the public space under the dwellings was not used as the architect thought. The small shops were impractical and did not work as it was expected, so they were soon replaced by workshops and small businesses which do not have to rely on visitors.

Nowadays, most visitors go to Kijk-Kubus, which is one of the cube houses turned into a museum. This one was opened when the owner of a Cube House, who was tired -just as the other owners- because of the great amount of tourists who walked around the complex, decided to set an entrance fee and allow visits. Thanks to that, today it is possible to see one of this eccentric houses totally furnished, and walk around their rooms. 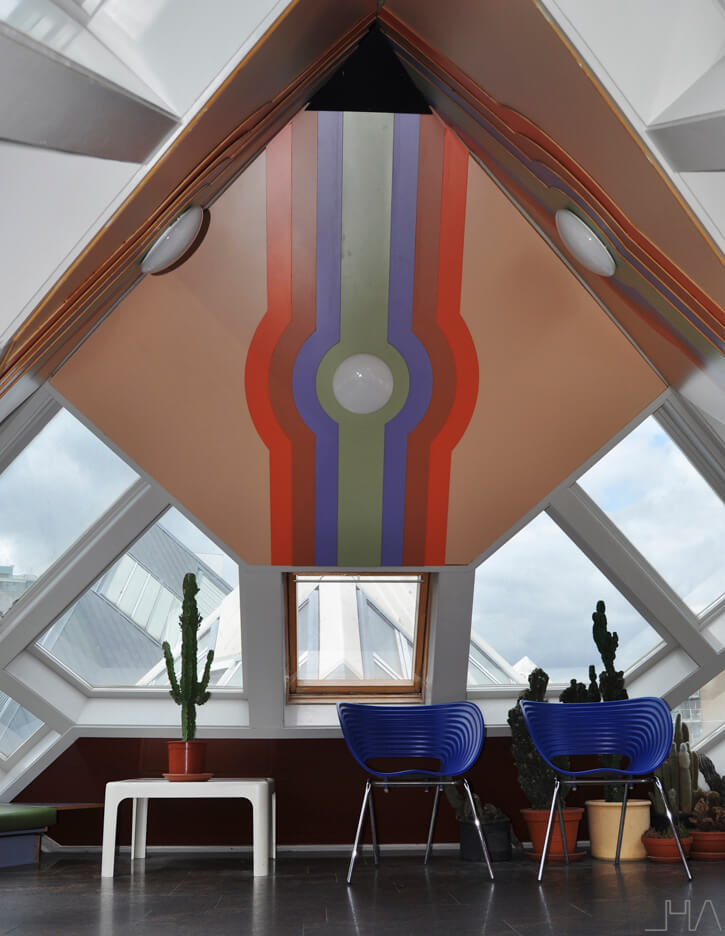 The visit starts in a little staircase placed in the “trunk”, which provides access to the cube. This one has three levels, and they are arranged as in a conventional home, although its exterior walls tilted 45 degrees.

The lower floor, which has the shape of a triangle, accomodates the living room, the kitchen with a dining table and a bathroom. This one is called het straathuis -street house-, and it makes reference to the relation that it has with the outside. Due to the inclination of the walls and windows, it is possible to see the street anytime. The intermediate floor, called hemelhuis -sky house-, accomodates two bedrooms and a bathroom, making the most of the several corners. Lastly, there is the loofhutje -leaf hut-, which accomodates a room on the third floor. From here it is possible to enjoy a singular view of the surroundings, thanks to its pyramidal shape which offers a great view of the sky.

The only walls of the house which are not slanted are the ones in the core, which implies that a lot of corners are not useful. 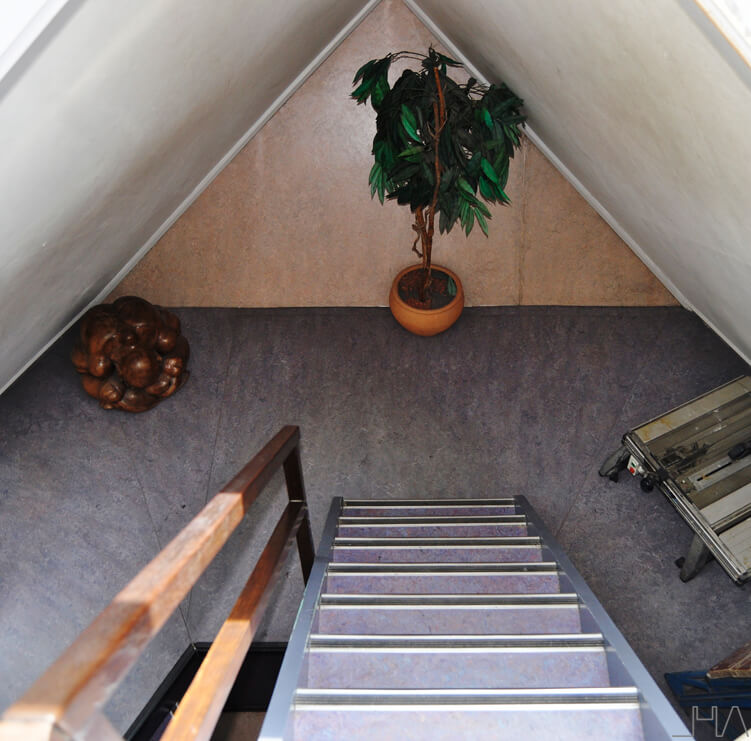 It is fun to walk around the house and imagine what it would be like to live in one of this cubes and its strange spaces. We do not have to forget that all the cubes have a private owner and that they are inhabited.

Besides, apart from visiting the Kijk-Kubus, nowadays it is possible to stay in one of these cubes thanks to the Stayokay Hostel. This one was opened in 2009, and it occupies the place that previously had the Academy of Architecture since 1985.
There is no possible excuse not to visit one of these cubes and amuse oneself with the peculiar form of its spaces. 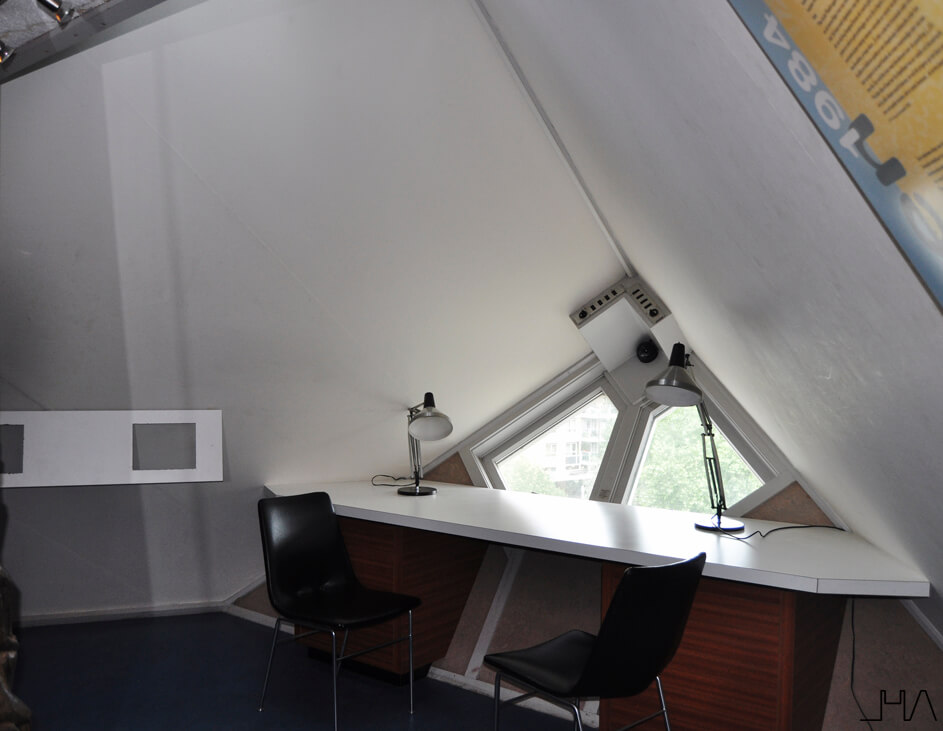 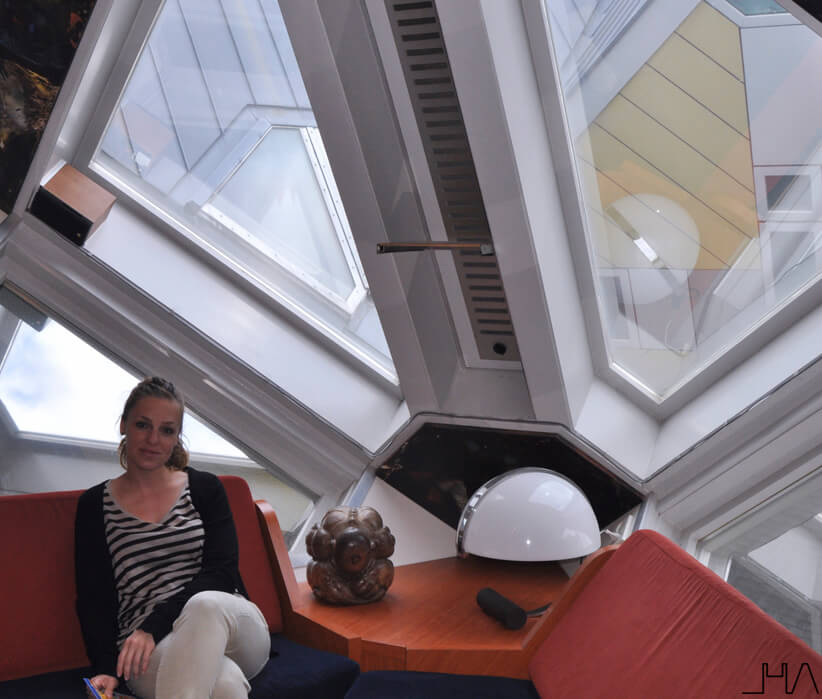 Finally, I’ll show you the views of the Oude Haven -Old Port- of Rotterdam from Kubuswoningen. From this point it is possible to see the Witte Huis -White House-, which fortunately survived the bombs of the World War II. This one, built in 1898 and with 43 floors, used to be back then the highest office building in the world. 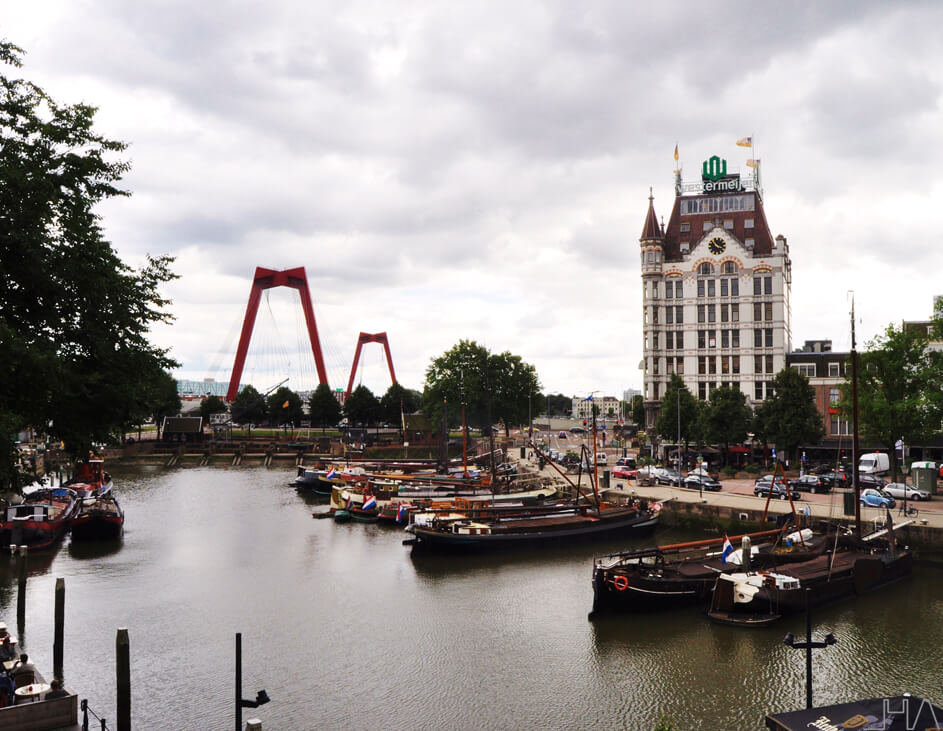