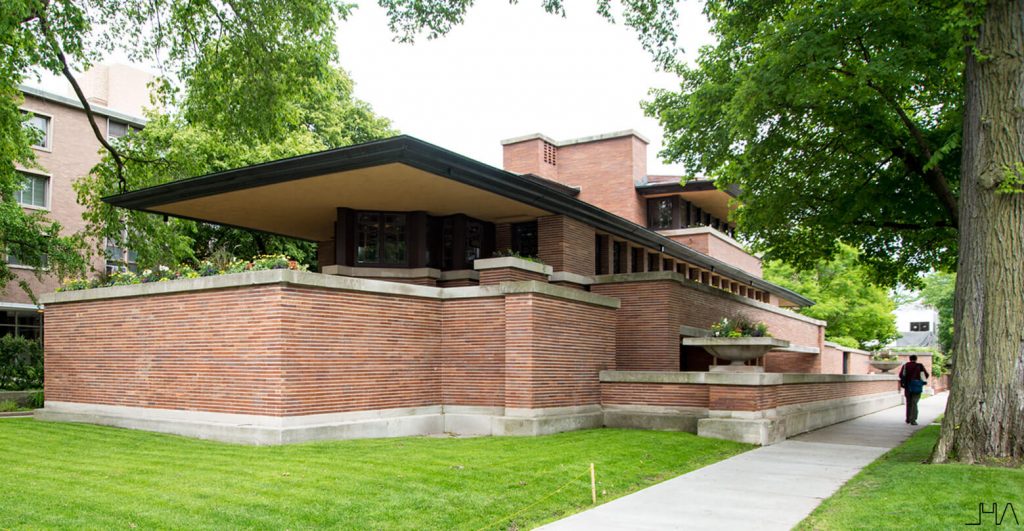 Today is the 150th birthday of Frank Lloyd Wright, and here you have the Robie House to celebrate it. As I told you in my post about the Home-Studio in Oak Park, I visited many of his building while I was in Chicago. Of them all, this house was the most important one.

For those who are not very familiar with the architect, you must know that among his designs we can find very famous buildings such as the Guggenheim in Nueva York or the Fallingwater. Even so, I wanted to show you the Robie House, as it is one of the most important houses of the 20th century in the United States.

The Robie House as a model of the Prairie Style

The Robie House was the culmination of his Prairie Houses, and nowadays it is considered as an example of contribution to the North American culture. Wright started defending the Prairie Style in the early 1900s. Thus, when he received the commission for the Robie House in 1908, he could implement what he had learnt with his earlier designs.

For a better understanding of this style, we need to know his ‘organic architecture‘. Wright stated that a structure should look as if it naturally grew from the site. Thereby, if we think of the huge land extensions in the United States, we will understand why the architect was obsessed with the horizontality.

Following, you have a beautiful description of the Robie House, and also the Prairie Style, by Frank Lloyd Wright. I thought it was the best way to introduce the house:

‘We live in the prairie. The prairie has a very characteristic beauty. We must see and emphasize this natural beauty, its calm extension. Hence the roofs with a slight slope, the small proportions, the peaceful silhouettes, the solid chimneys, the protective overhangs, the low terraces and the advanced walls which limit small gardens.’

To conclude, do not miss the activities and programs organized by The Frank Lloyd Wright Preservation Trust to celebrate the 150th birthday of the famous architect. Feel free to leave a comment about your experience if you enjoy any of them. I will love to hear from you!