WRIGHT HOME-STUDIO. The birthplace of a genius in Chicago

“If you can make it in New York, you can make it anywhere” was what Frank Sinatra sang in the late seventies. Well, even though I knew that my American dream would be more difficult in this city [see TWA Flight Center], this was not the reason why everything started somewhere else.

New York had always been my main goal, but the first destination for my adventure could not be other than Chicago, the mecca for Modern Architecture. Not only is the city with its own architectural style [Chicago School], but also it was the home of one of the most important and famous architects in history, Frank Lloyd Wright.

I spent three months in this fascinating city, so I could visit many buildings designed by Wright. Among them, I couldn’t resist starting with his Home and Studio in Oak Park. Even though it is not one of his most famous works, a lot of them were developed there.

It all began in 1887, when Wright moved to Chicago to start working for the influential architectural firm Adler & Sullivan. Two years later, in 1889, the architect built his own house in Oak Park, an adjacent village to the West Side of Chicago. 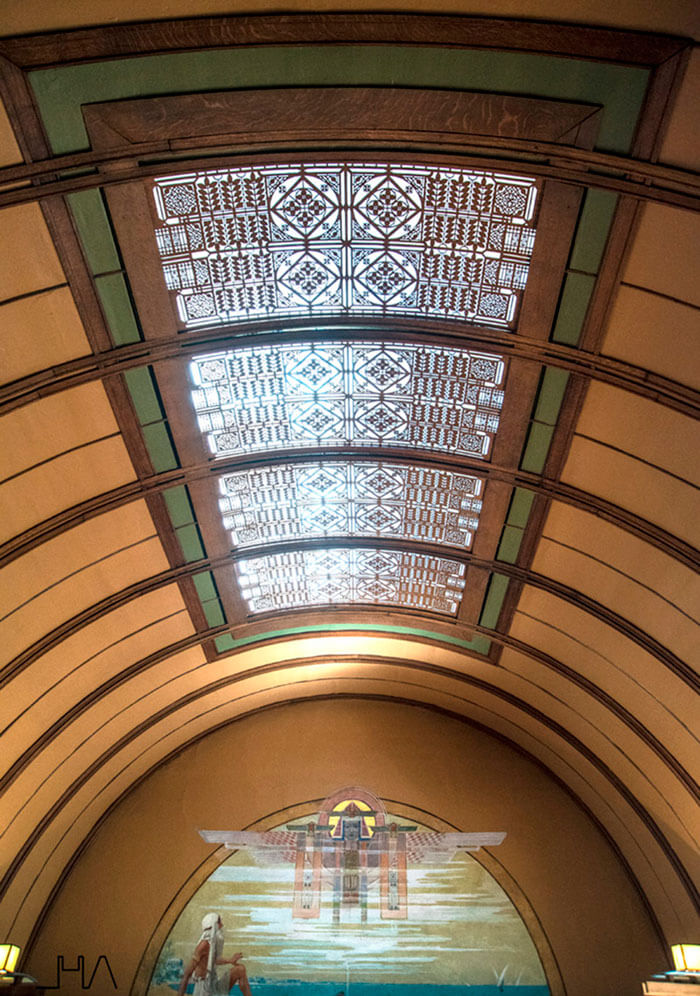 Initially, Wright designed the house to be his own home along with his first wife and his six children. However, in 1898, it also became his architectural studio. It was here where he developed his organic architecture until he moved to Europe in 1909, and where the famous Prairie Style was born. 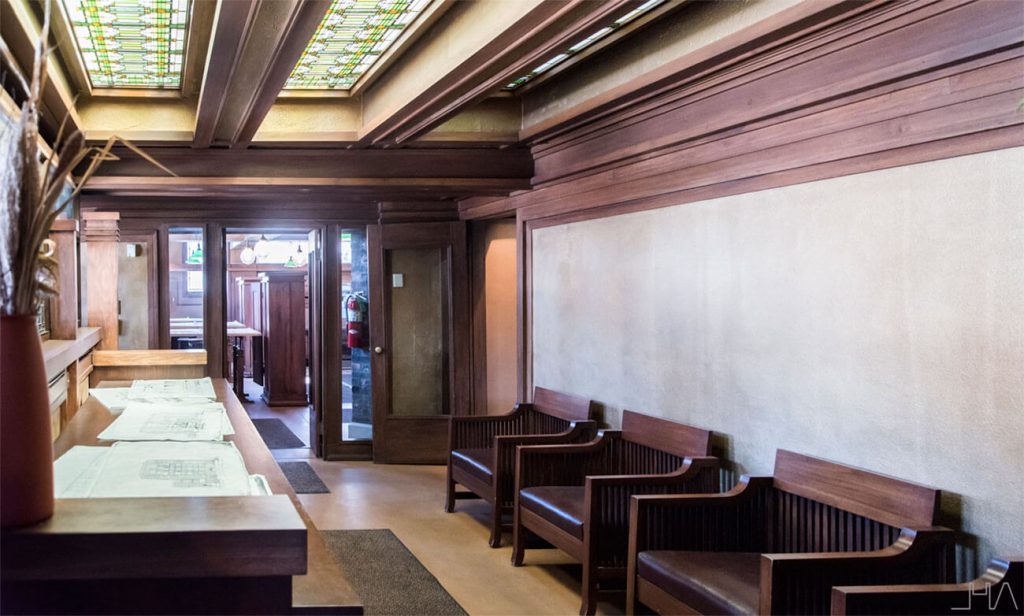 But before getting into the Home and Studio I would like to show you the surroundings, as they are also an important part of the visit. Wright designed a lot of houses in Oak Park, so it was a delight to walk through the neighborhood and discover these distinctive treasures. 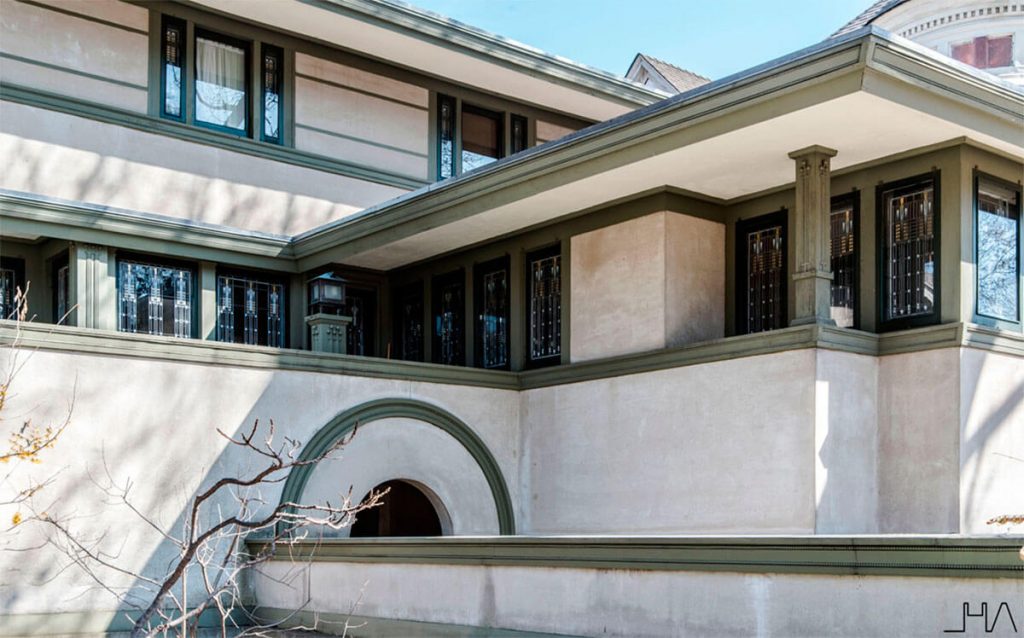 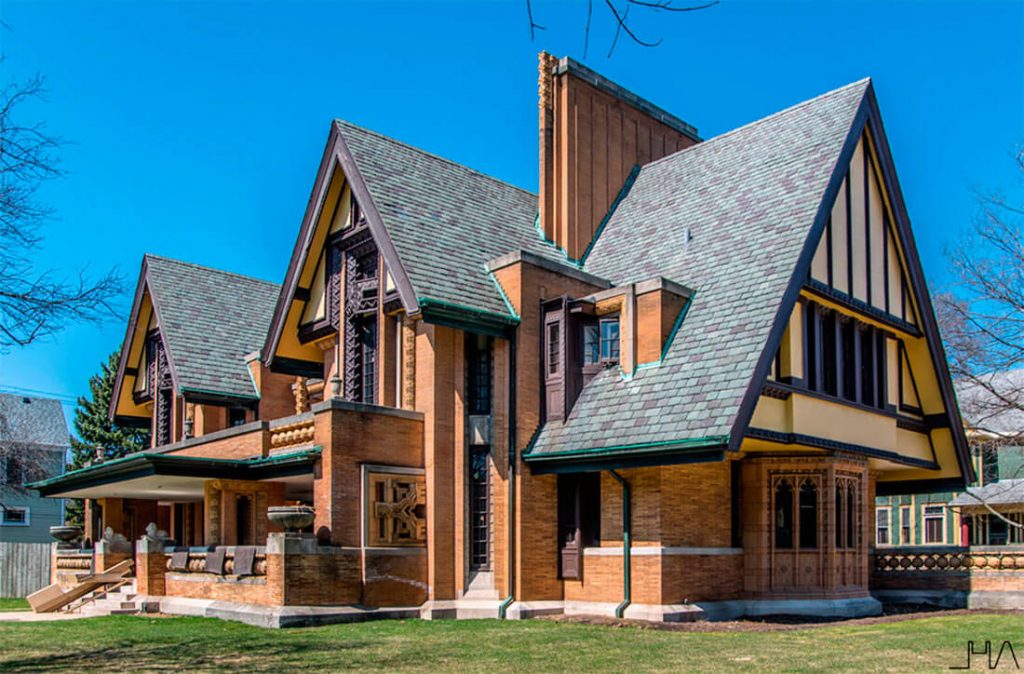 And when you arrive at 951 on Chicago Avenue, there you have the Wright Home and Studio, with a beautiful and simple garden. The first thing that struck me was the characteristic main façade, which has a strong geometry with clean and pure shapes. 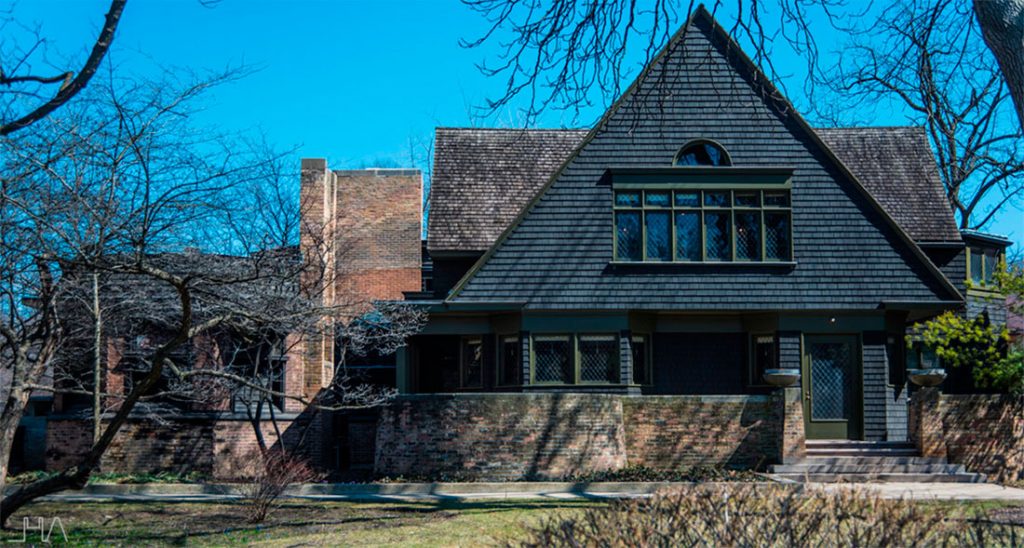 Once inside the house, the Home and Studio shows what Wright would later develop as his organic architecture, where the human scale can be perceived everywhere.

I think that one of the most interesting elements in the original house was the fireplace. It creates its own area in the living room, besides presenting a witty illusion with a window right above it. The fireplace has the following inscription, expressing the pleasant atmosphere of this place: “Truth is life. Good friend, around these hearth-stones speak no evil word of any creature.” 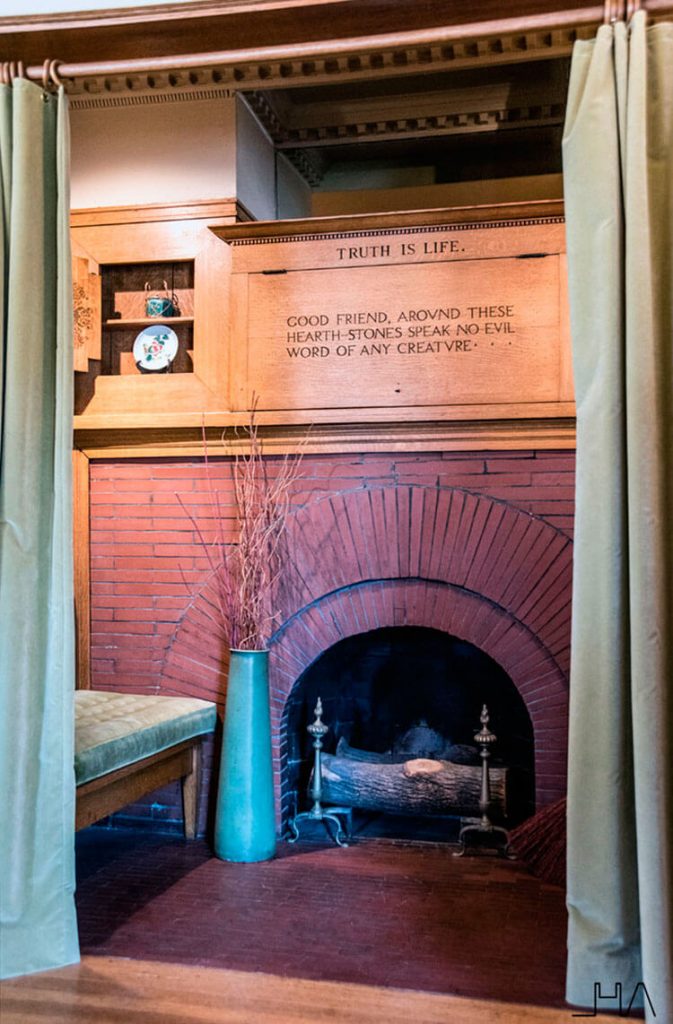 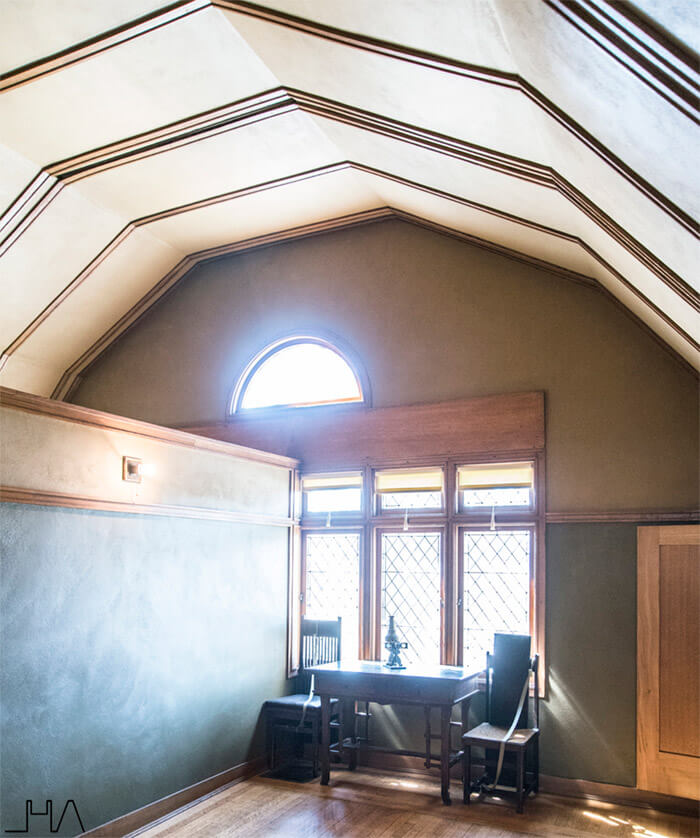 In 1895 the home went through several additions and renovations, and then the most characteristic spaces where built.

One of these was the Dining Room, where I was fascinated by Wright’s famous dining room furniture. The tall back chairs surround the dining table and create a separate space, protecting the family from the outside world. The interesting skylight just above, emphasizes the beautiful ambiance. 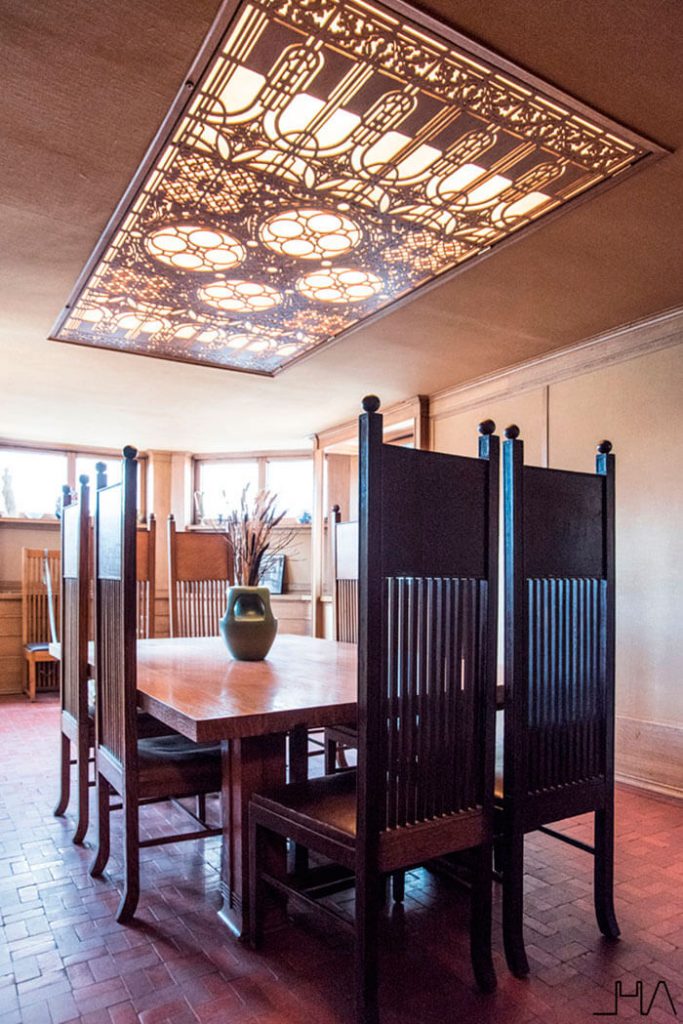 The children’s Playing Room was another addition, where I could have spent many hours just observing the place. The exquisite skylight at the vault ceiling, the perfect lamps at both sides of the room, the curious wall painting above the fireplace, the balcony used as a stage… Each and every individual element has its own story separately, however, all of them as a whole merge in perfect harmony. 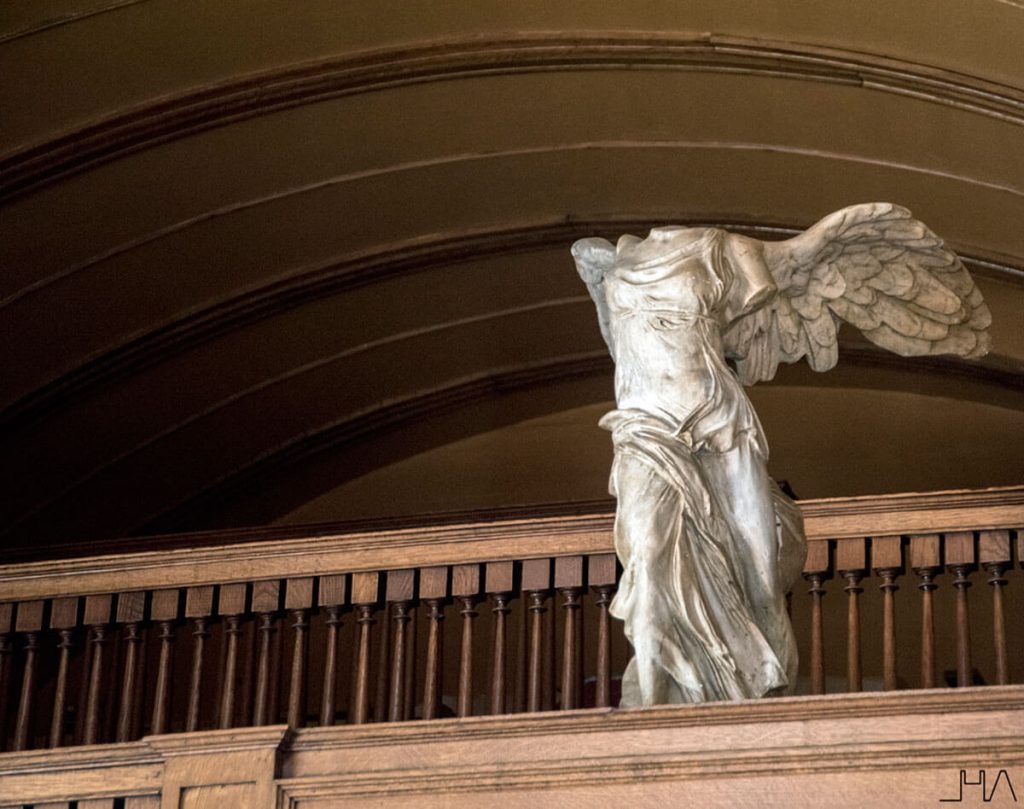 It was in this room where I found one of the wittiest and funniest ways to solve a design problem. I am talking about the grand piano, which Wright considered as an essential element for a room where small concerts were performed. Nevertheless, he didn’t want it to play a central role in the room, so he decided to hide the back part of the piano behind the wall and upon a staircase.

Could you imagine a more functional solution? Judge for yourselves with the pictures I took during my visit. 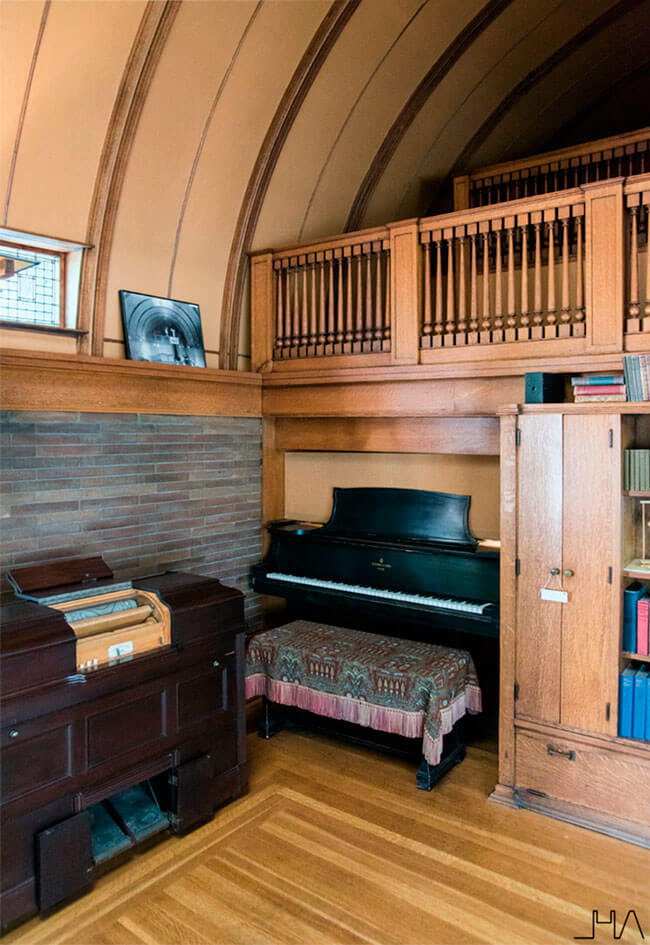 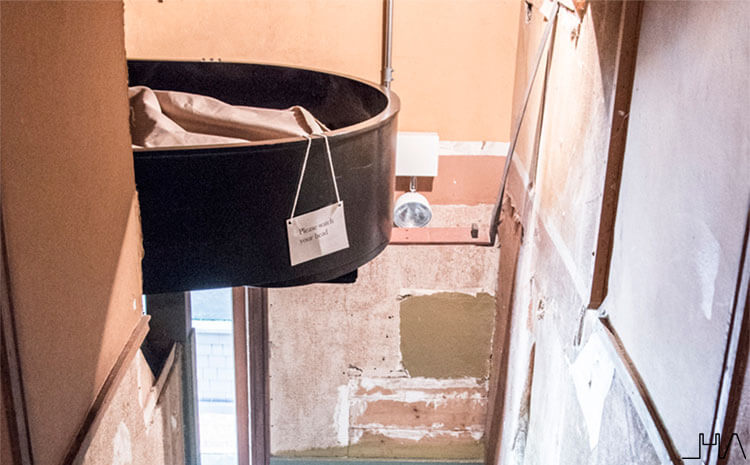 And now, let us go to the second part of the visit, because there is much more. After some professional disagreements, Wright decided to open his own architectural firm in Oak Park. For this purpose, he enlarged his house again on the North side, where the new entrance porch was placed. The studio could work independently even if it was connected to their home. 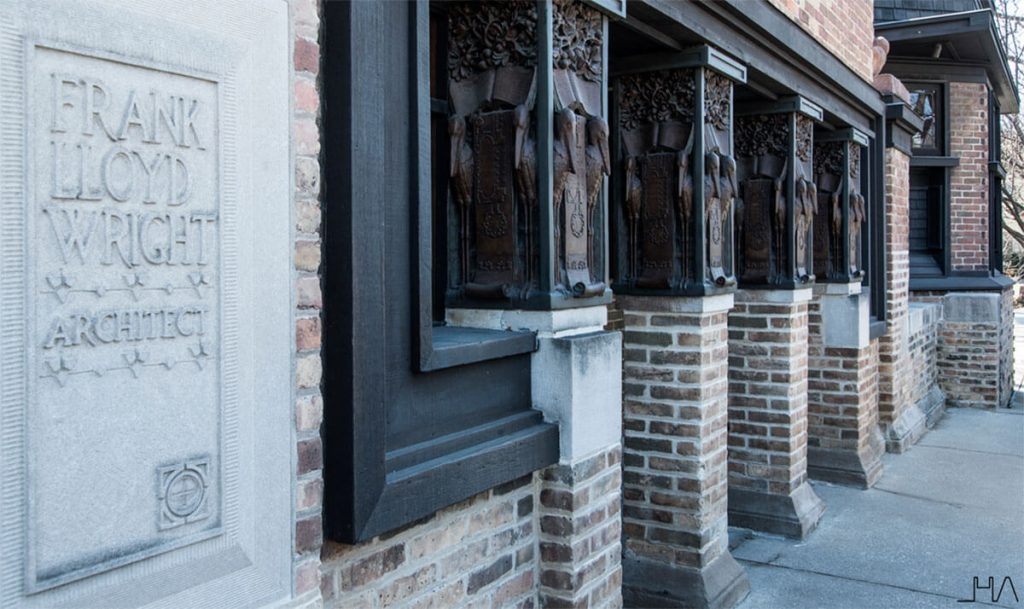 In this new porch there are four interesting columns full of symbolism, which lead the visitor to the studio entrance. These where designed by Richard Bock, Wright’s friend and collaborator, who was also in charge of most of the sculptures that are placed on the exterior of the Home and Studio. 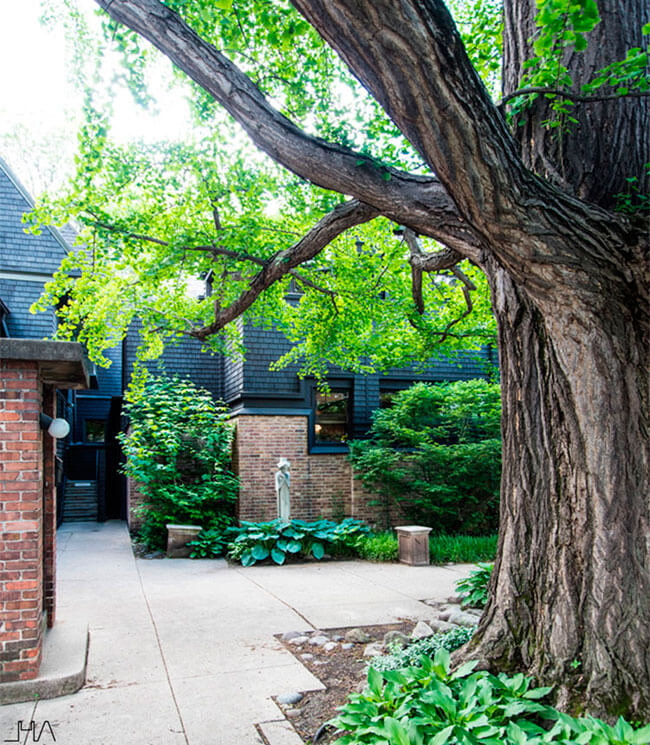 Once inside the studio, the show of natural light starts. All rooms have beautiful skylights or high windows which allow a nice zenithal light.

I felt very excited when I saw the Drafting Room. All the tables are full of drawings and floor plans, so I could imagine how a typical workday was more than a hundred years ago. It is an octagonal space with double height, where an interesting chain structure supports the wood catwalk that surrounds the whole main room. 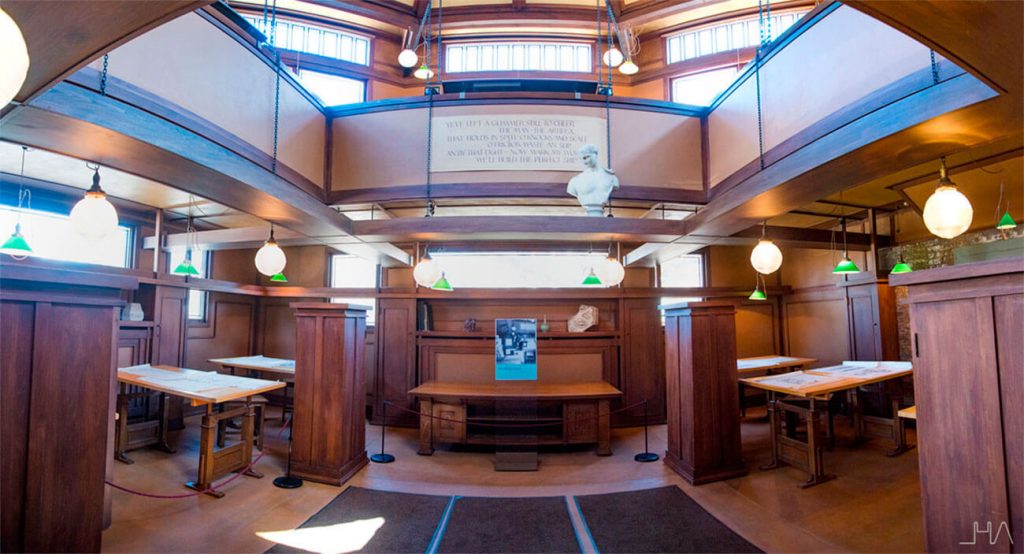 I was also fascinated by the Library. It is just a small octagonal room, but thanks to the careful interior design and the abundant natural light it is a wonderful place for studying and research. 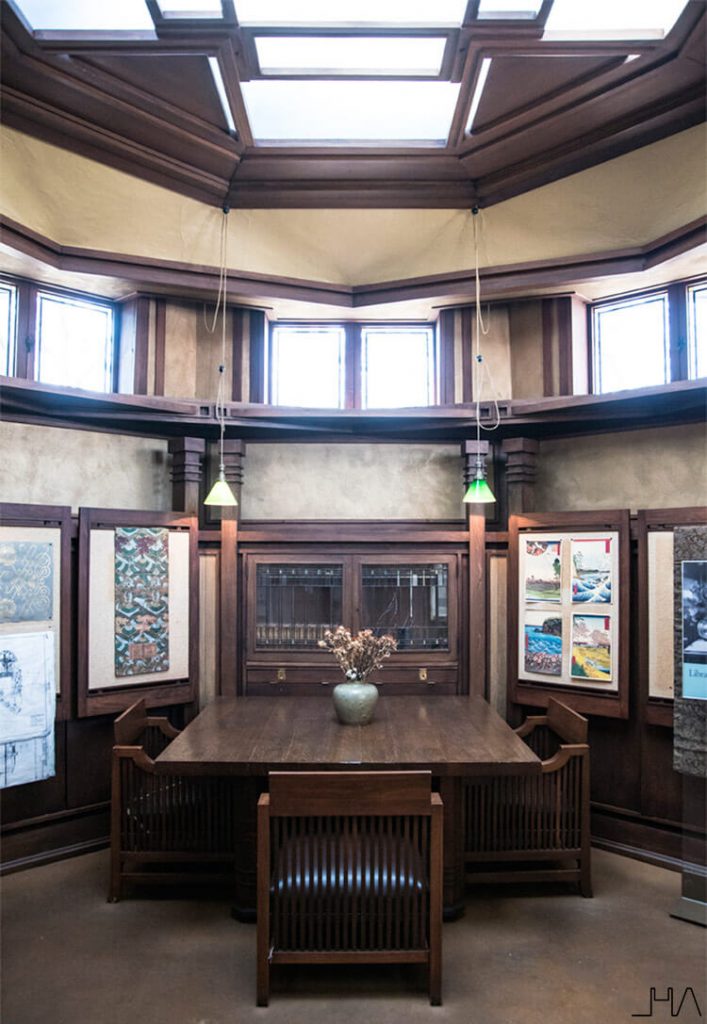 Following you can see Frank Lloyd Wright’s private study, and a friendly tree that became trapped in the corridor connecting the home with the new studio. 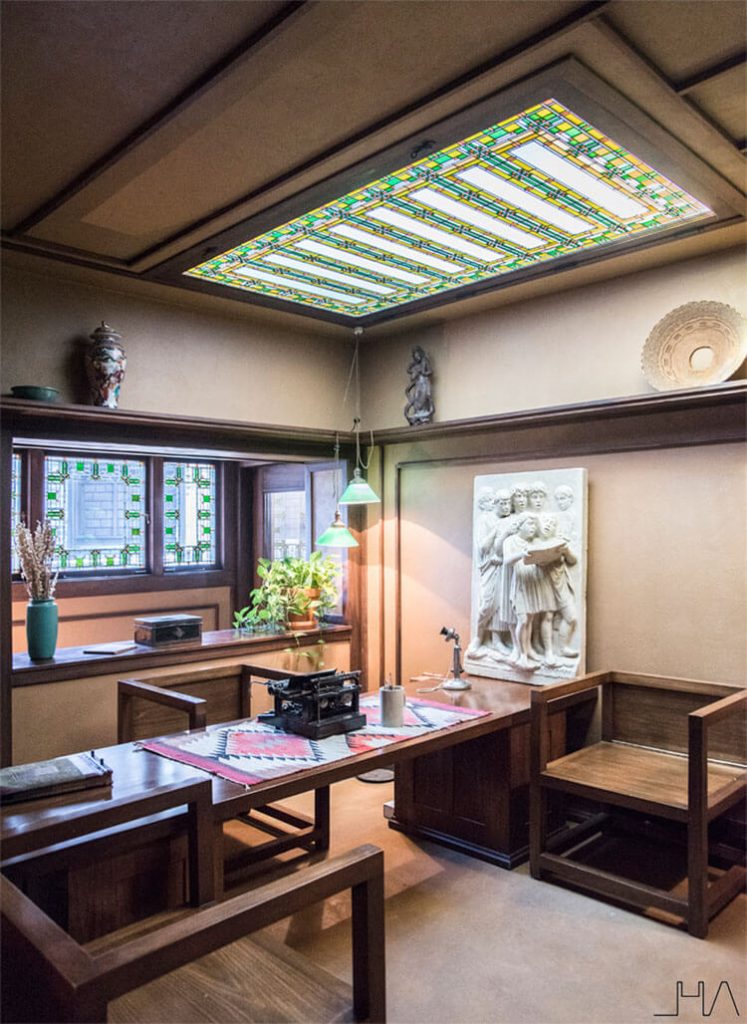 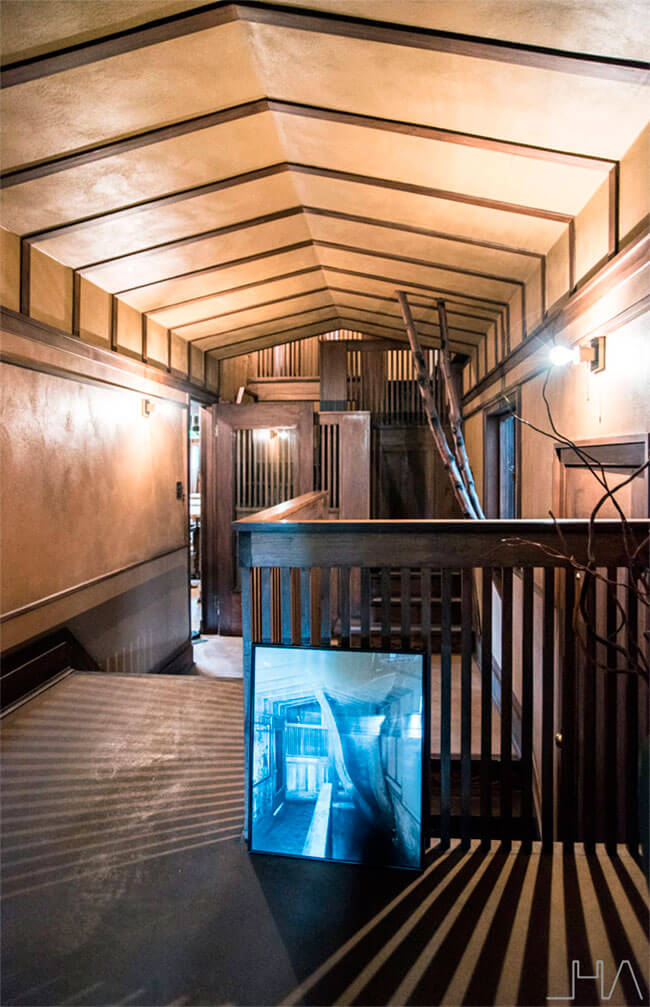 The Wright family left their home in 1911, and after it suffered several modifications, the house went into decline in the 60s. It wasn’t until 1974 when the National Trust for Historic Preservation (NTHP) acquired the building and it started a 13 years restoration. It was how the Home and Studio recovered its appearance of 1909, last year when the whole Wright family was living there, including the architect. 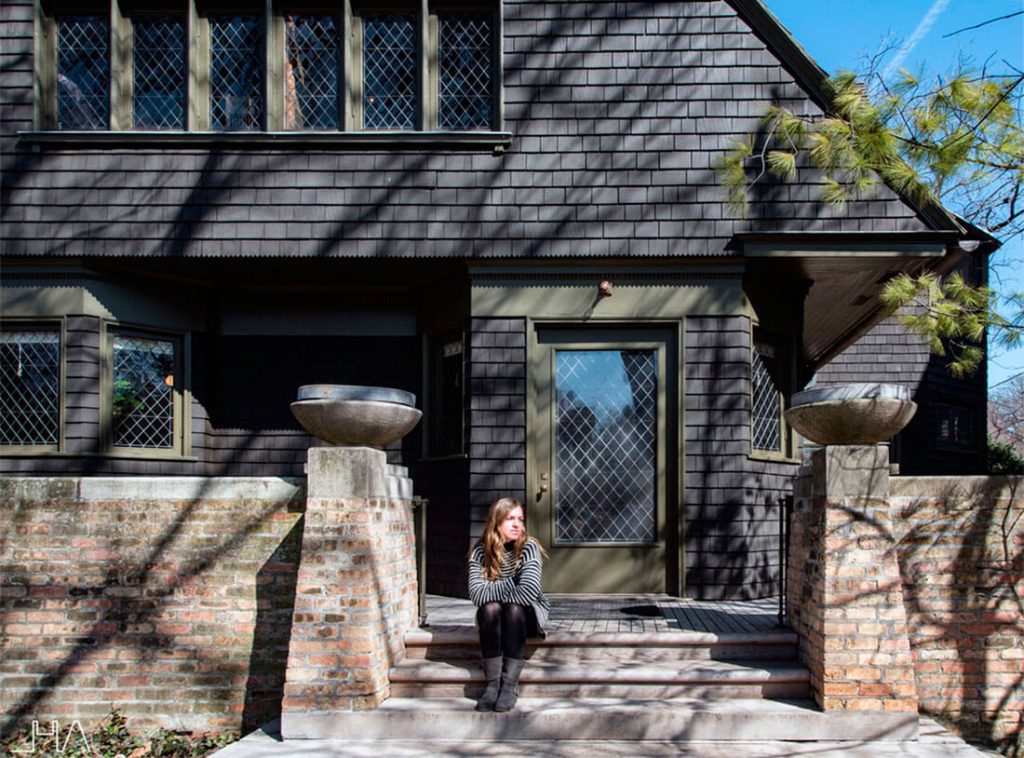 It was in 1976 when the Home and Studio was declared a National Historic Landmark. Nowadays it is maintained and operated as a museum by The Frank Lloyd Wright Preservation. Every year they organize the Wright Plus Experience, the only way to visit many of the private houses that Wright designed in Chicago.

If you have the chance, don’t hesitate to join this amazing meeting. Last year, during my stay in Chicago, I could join the 2015 edition, and trust me when I say that it was an unforgettable experience.