TWA FLIGHT CENTER. A bird made of concrete in New York

Who has never thought of leaving everything behind to pursue a dream? Starting a new adventure that you always wanted to undertake but you thought it would never become real.

It has been a long time since I post my last visit, the College of the Teresianas, in which I bade farewell to Barcelona for a while. Then I started my own adventure, the dream I always wanted to achieve and which has completely changed my life. I will try to briefly tell you my own story during the next posts, using these architectural visits that helped me to have a richer and sweeter experience. 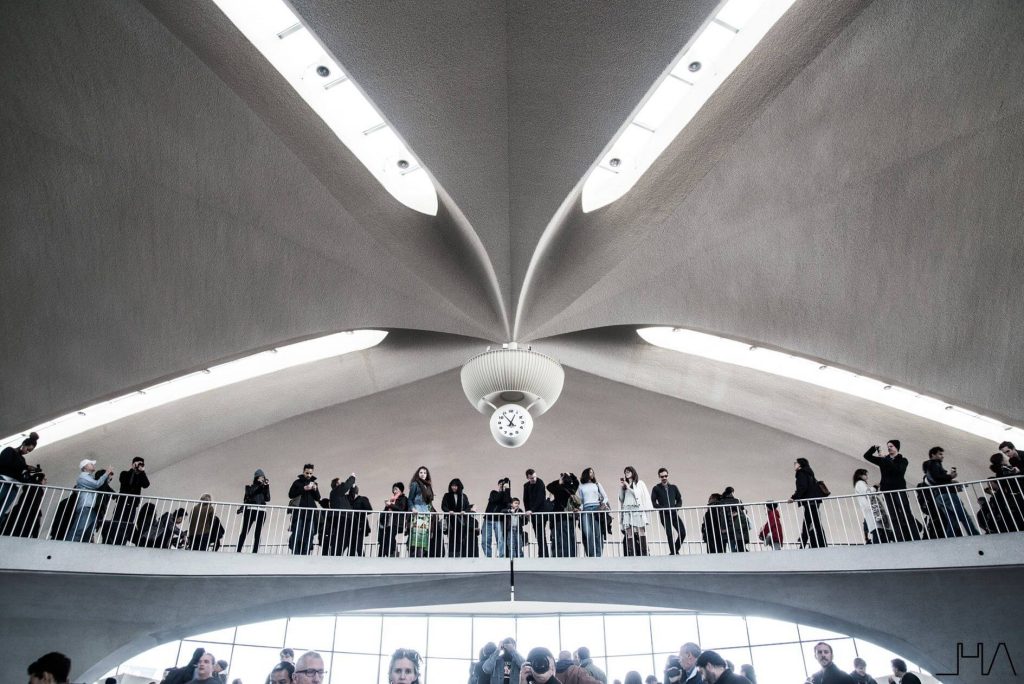 Let us start by the end, even though it is a new beginning for me, a new home, New York. I moved to the Big Apple just some weeks ago. It was a dream I had been pursuing for a long time, and which I thought that was nearly impossible to reach. Nevertheless, after struggling to find an opportunity for months, my dream became real. Though I was very excited and willing to start my adventure, the first weeks were really hard for me. Actually, it was difficult to adapt myself to this amazing but also overwhelming city.

But now that I am feeling much more confident and calm, I am happy to come back with one of the most spectacular buildings that I have visited in the city, the Trans World Flight Center at John F. Kennedy International Airport, designed by Eero Saarinen.

I arrived to New York just before the annual festival of Architecture that I have mentioned several times, the Open House, and this is how I had access to the building. The TWA Flight Center has now been closed for several years because it does not meet today’s needs. But let us start at the beginning and have a look at its history. 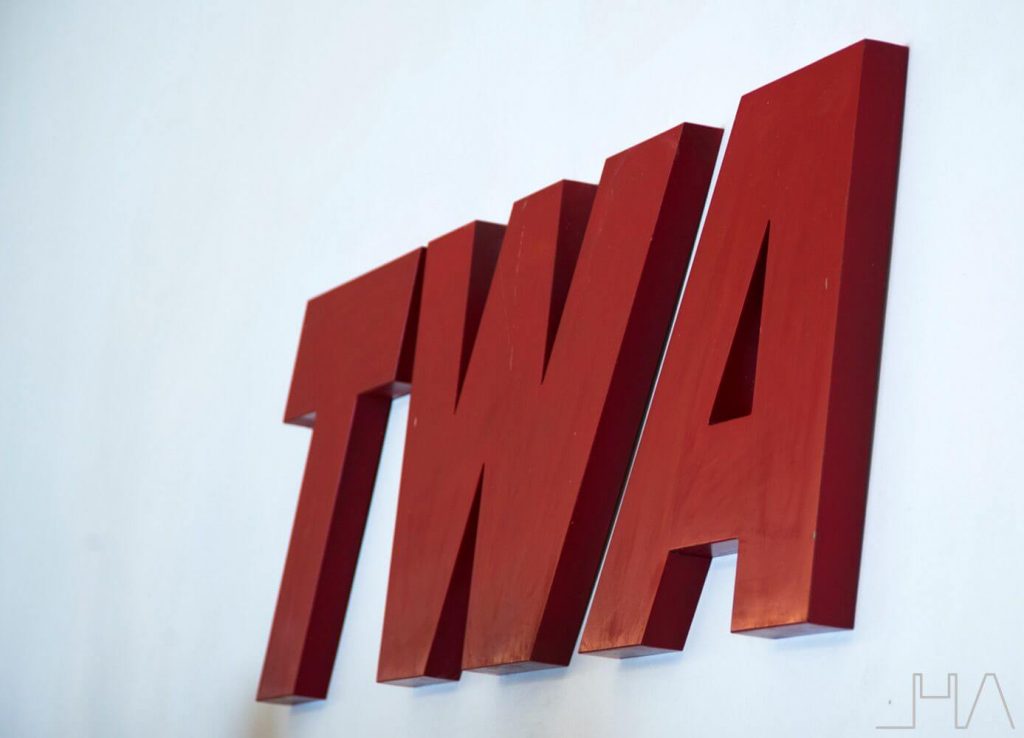 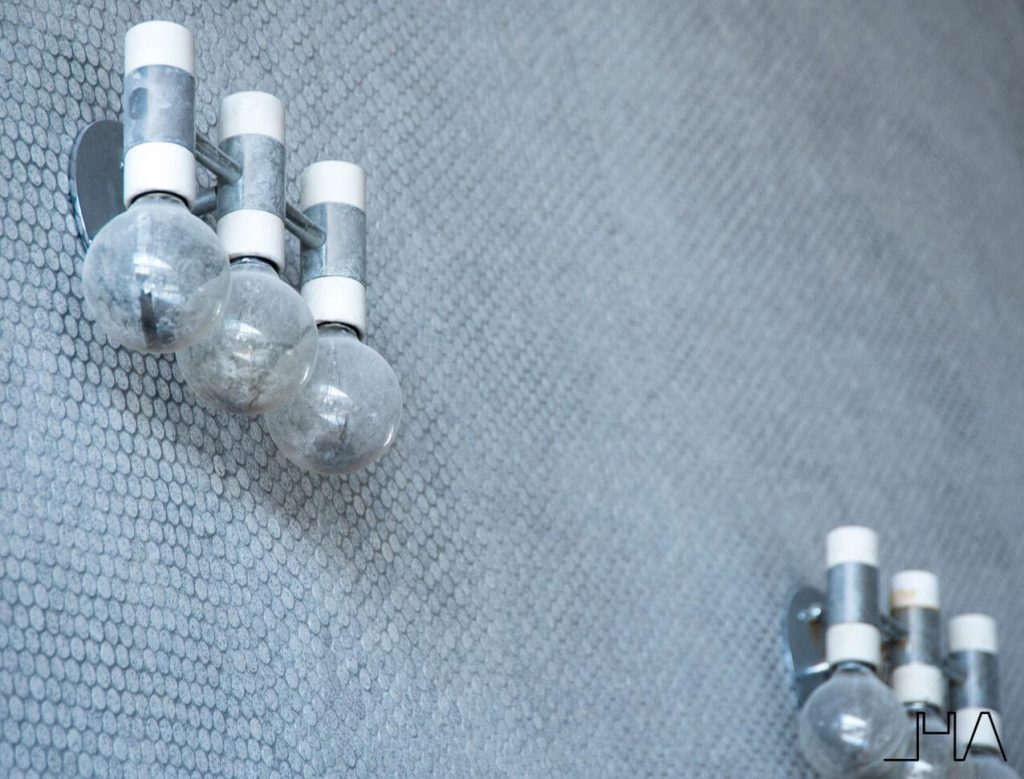 Eero Saarinen received the commission for a new Flight Center in New York’s Airport in 1956. Up to this moment, the work of Saarinen -who studied sculpture in Paris during his early years- was already notable for not following just a single architectural style. An important part of his work was full of modular spaces and straight lines, however, Saarinen was also attracted to organic design. For this reason he was really interested in the work of architects such as Antoni Gaudi or even Le Corbusier, who finished Notre Dame du Haut in Ronchamp just a year before. 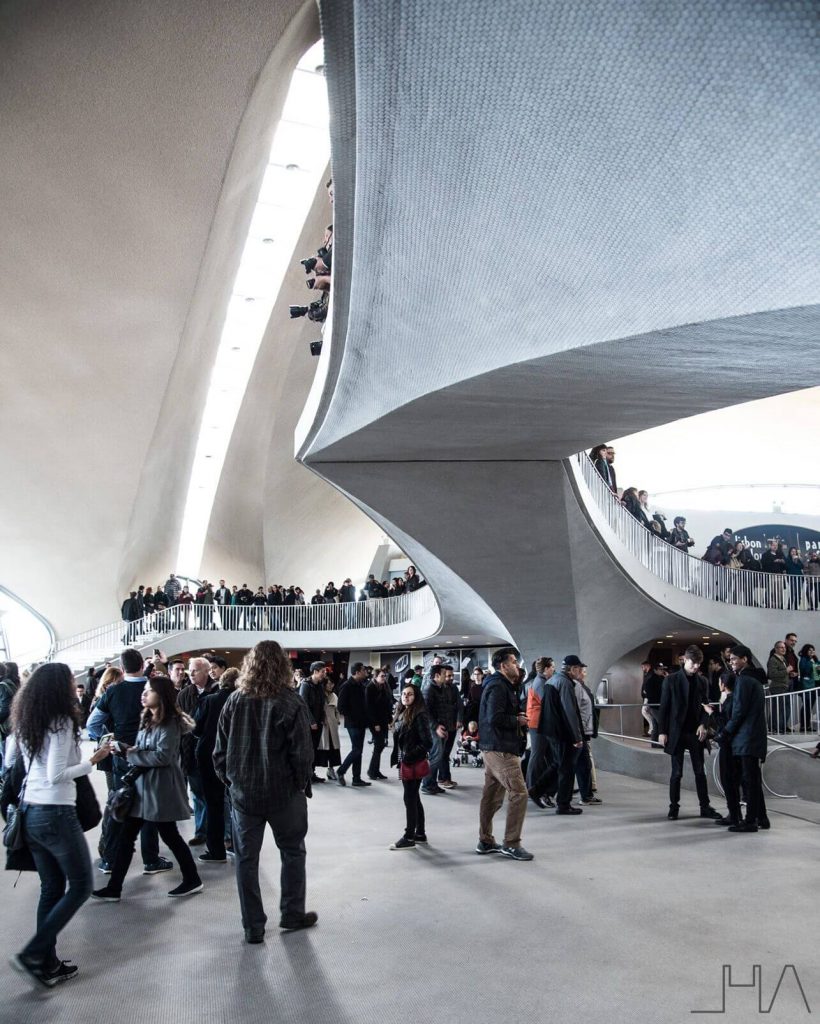 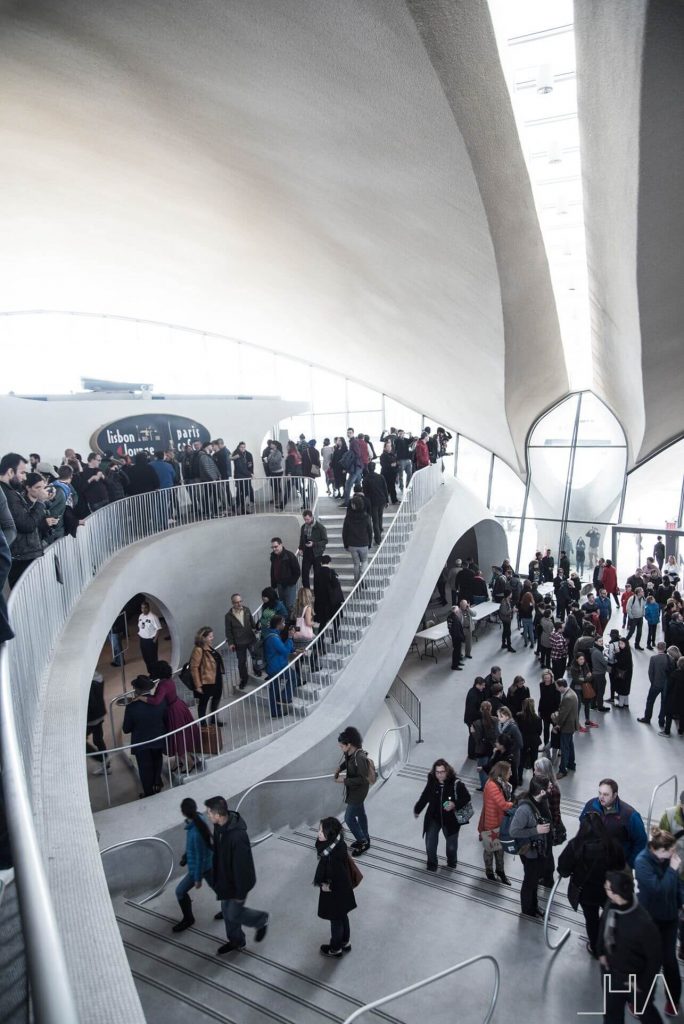 After years of work looking for the perfect shape, the flight center opened in May 28th 1962, one year after the death of the architect. At this time the commercial aviation world was different than nowadays, but it was starting to have more users every day. That is why Saarinen, who wanted to introduce the passenger to the airline industry, used reinforced concrete to represent the metaphor for the flight. Thus, the building rests on the ground carefully and with great majesty, looking as if it was a giant bird ready to start flying at any time.

Saarinen used a very old technique for the building main structure, the ogive vaulted ceiling. Not only did he achieve a beautiful exterior shape, but also a huge open space in the interior of the building. There are no columns or divisions that block the inner paths, so the interior is clear and continuous. Furthermore, the elements that make part of the interior space are designed in such a way that all of them emulate the movement, which seems to be frozen in the concrete shapes. 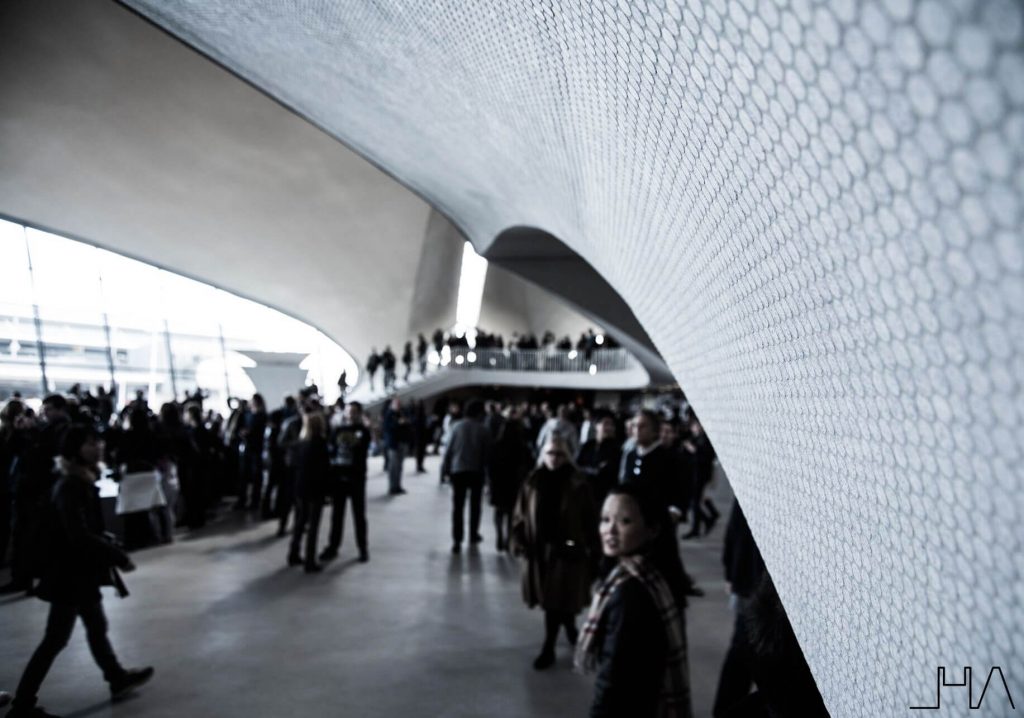 At the time of my visit, the TWA Flight center was very crowded so I started to imagine that people were carrying their luggage. It seemed like I had gone back in time, and the Flight Center was working like 40 years ago. Besides, the building still has a vintage style due to the furniture and the remarkable red carpets.

It was a pleasure walking along the long corridors which were designed to conduct the passengers to the boarding gates. Nowadays, they only work as a connection with the new flight center. 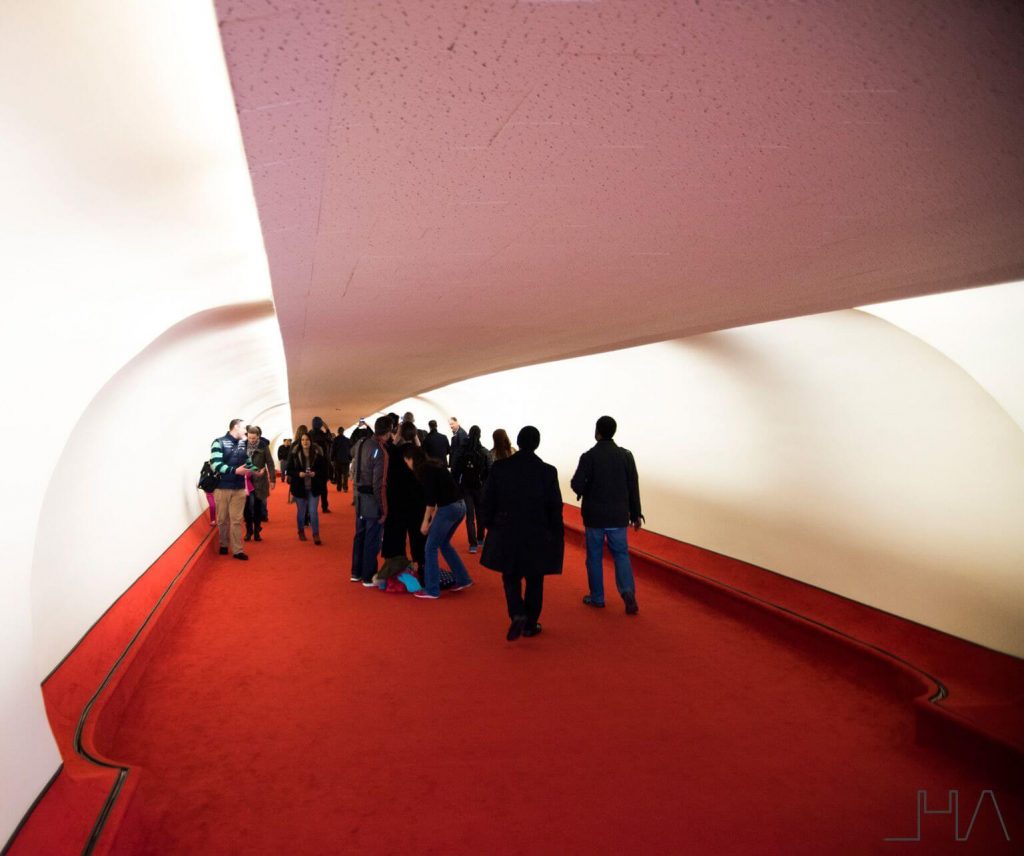 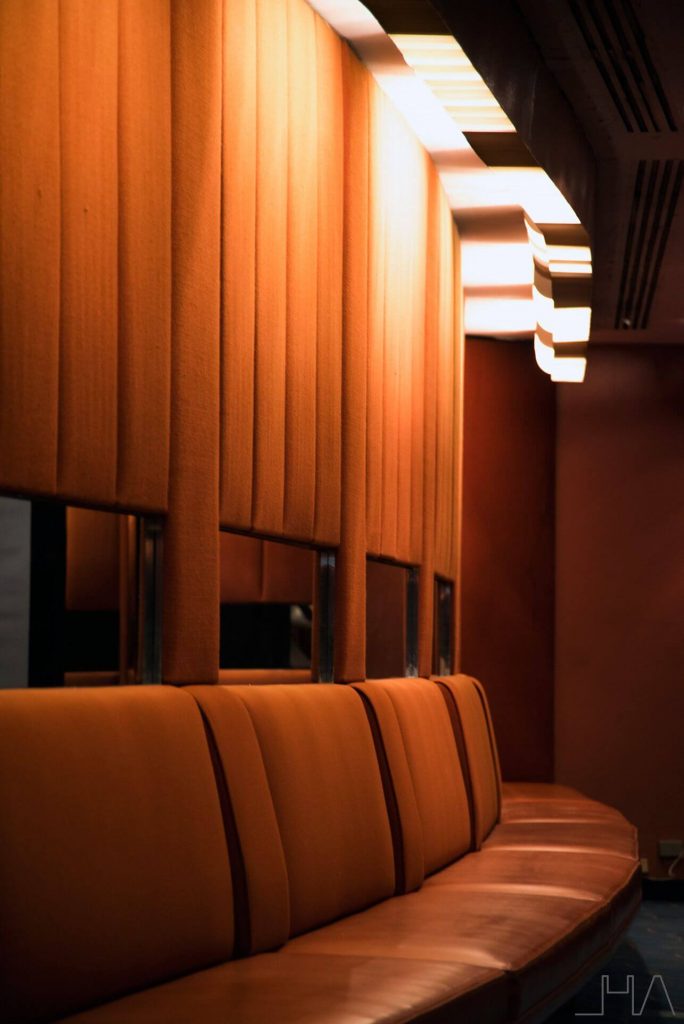 Do not miss the information desk, which stands in front of the main door as if it was a huge sculpture. 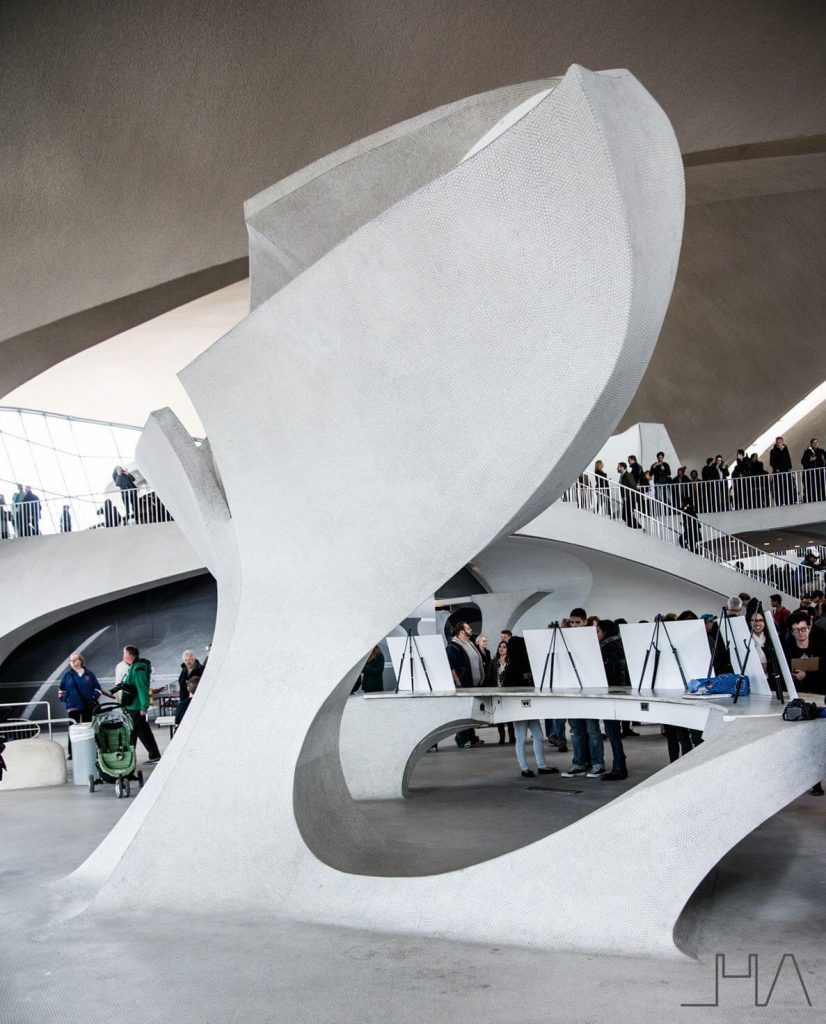 This is a very remarkable building, so let us continue with its history to know more. In 1994 the city of New York designated both the interiors and the exteriors of the terminal a historic landmark, and in 2005 it was listed on the National Register of Historic Places.

Unfortunately, the Flight Center has been closed since 2001, and for some years it was used just for temporary installations. 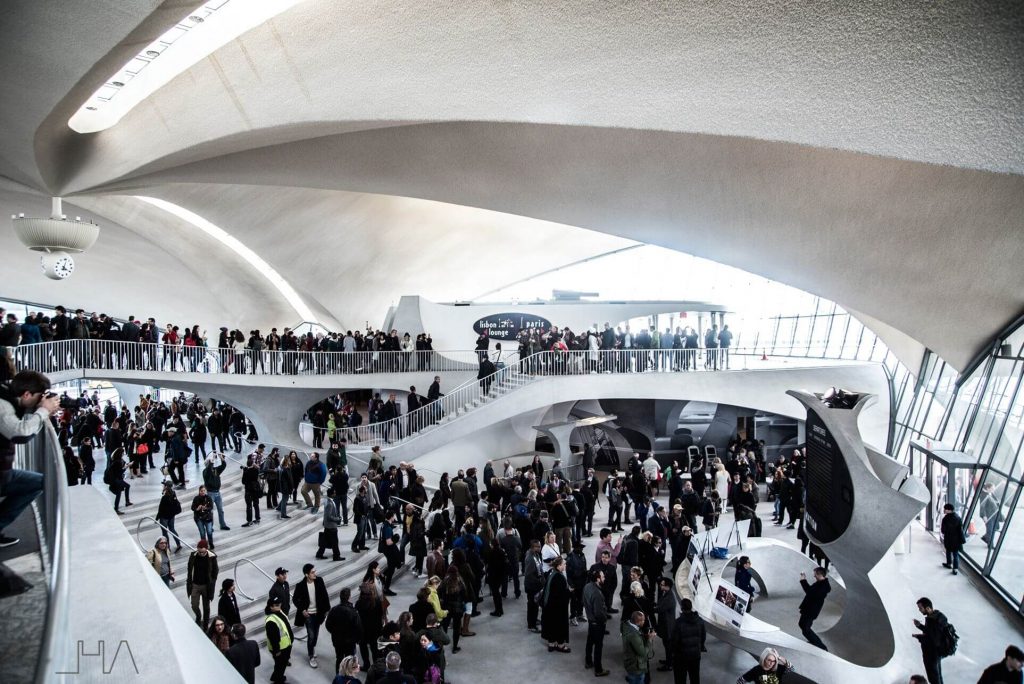 The future of the terminal has been discussed for many years, because it is difficult to find a good one for such a special building. We can find a lot of different proposals to change the use of the TWA Flight Center, among which there is a restaurant, a conference center, or even an aviation museum. Finally, it will soon become a new on-site hotel for the airport’s passengers, what was announced just some weeks ago. It looks like the project is going on well, and that the new hotel will be opened in 2018. Thus, the terminal will start to be transformed very soon, so I feel really lucky to have visited it before this change. 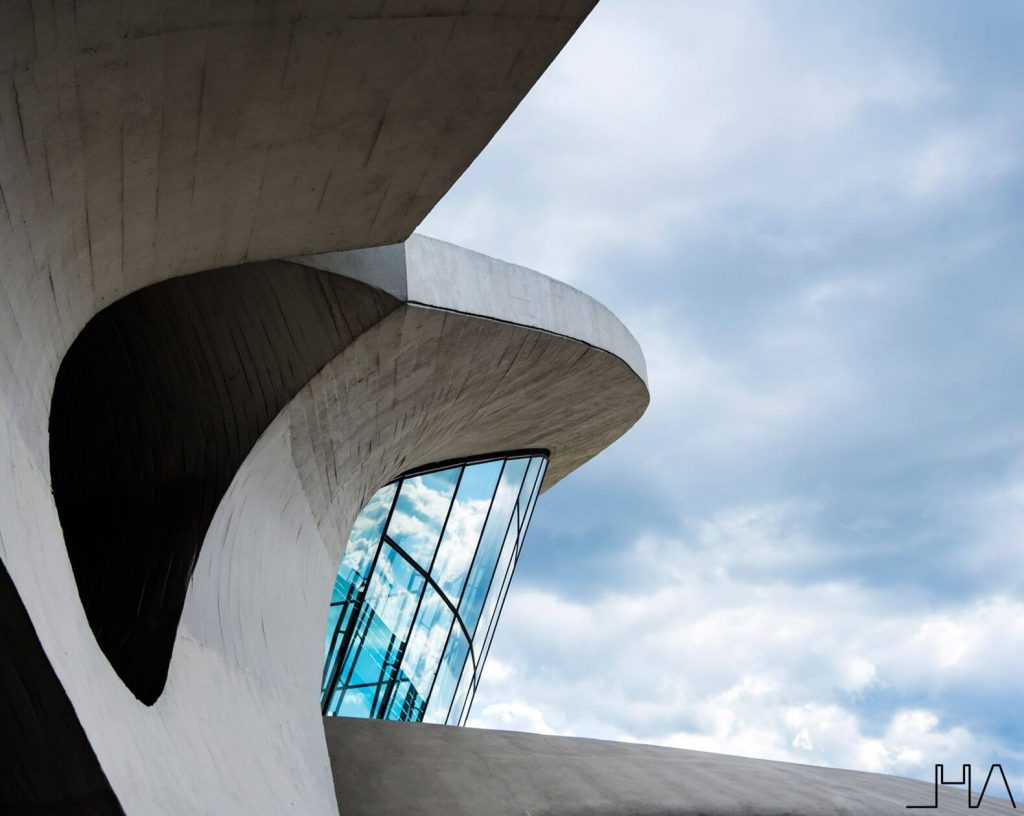 To conclude, here you have a short video of my visit. Thus, if you never have the chance to see the interior of the TWA Flight Center, at least you can come with me for a while. 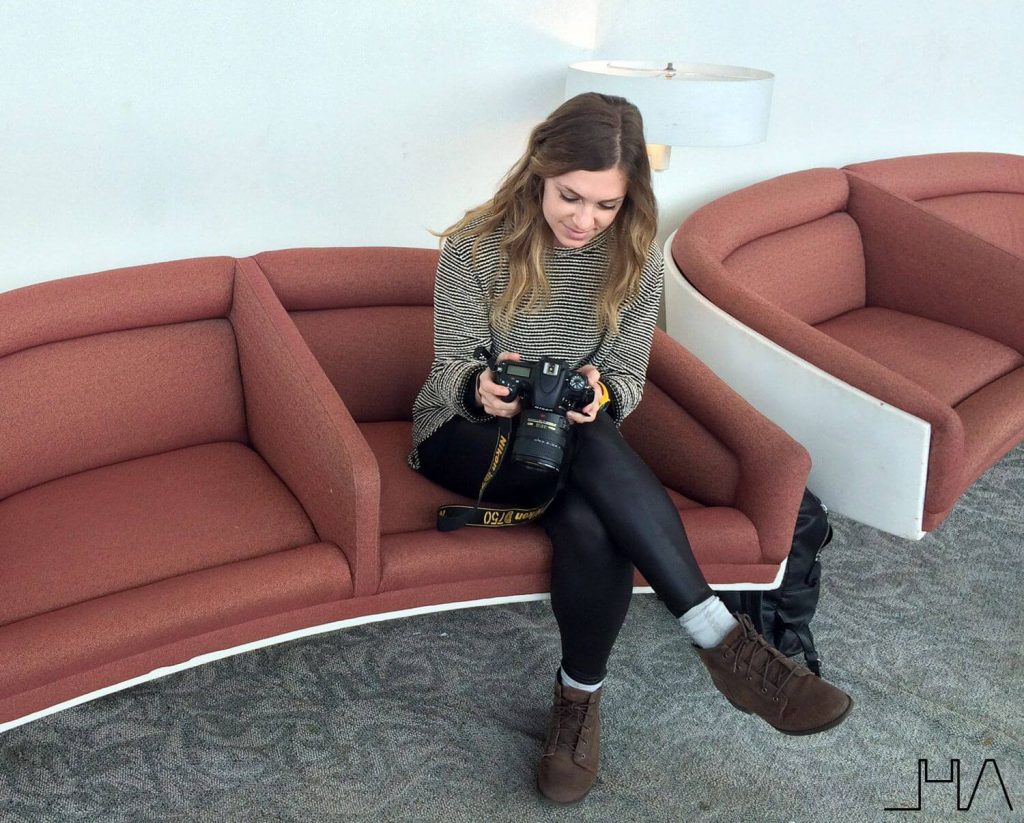