SHARP CENTRE FOR DESIGN. Courageous, bold and a little insane

If there is a building that surprised me during my visit to Toronto, it was the Sharp Centre for Design. Even though it has nothing in common with the neighbourhood, it stands proud over the main building of OCAD University.

Before proceeding, I must confess that the Sharp Centre for Design was not included in my list of ‘must-see’ visits. Nevertheless, now I admit that I was completely wrong.

At the moment I saw the daring colorful legs and the black and white pixelated façade, I understood why it is such a controversial building. It reminded me to the Centre Pompidou, which we saw some time ago [see here]. 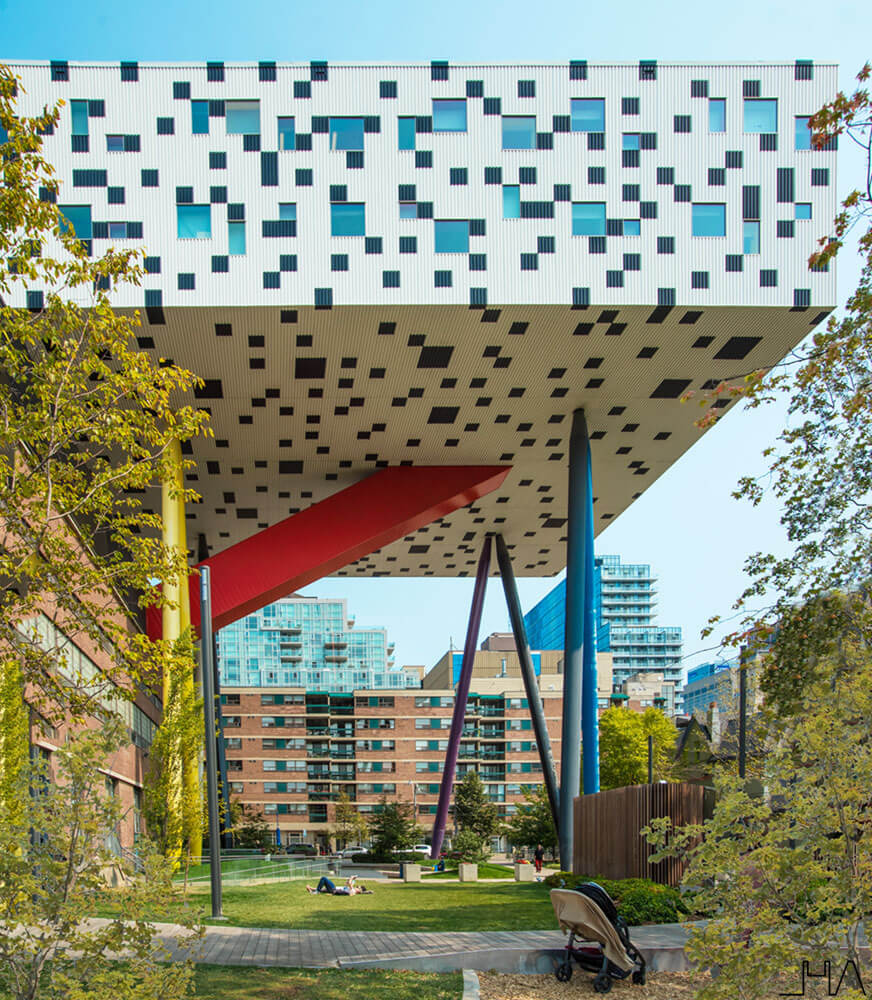 A new building for OCAD University

You may be wondering how this fun ‘tabletop’ ended up being the flagship building of OCAD University. It all began in 2000 when Will Alsop, a British architect, visited Toronto for the first time to talk about the project.

Until that date, the architecture of Toronto was considered competent but quite boring. Of course, this did not go unnoticed by Alsop.
He was horrified by the monotony and the lack of interest in the constructions, so he decided to break with the past and provide freshness to the city. We already know the result, and I’m sure you’ll agree when I say that he made it.

The surroundings of the Sharp Centre for Design

The Sharp Centre for Design is just in front of the Grange Park, which was very busy at the time of our visit. The neighbours seemed to be really happy with the area. Nevertheless, at first they were willing to fight against the construction of a new building to avoid losing open space.

Therefore, Alsop decided to raise the volume and use the ground floor as a plaza. Not only did the neighbourhood keep the views thanks to his decision, but it also won a pleasant public space.

We could enjoy all this while we went all over the surroundings of the Sharp Centre for Design. We first saw the beautiful view of the main entrance street, where the famous CN Tower stands at the back. 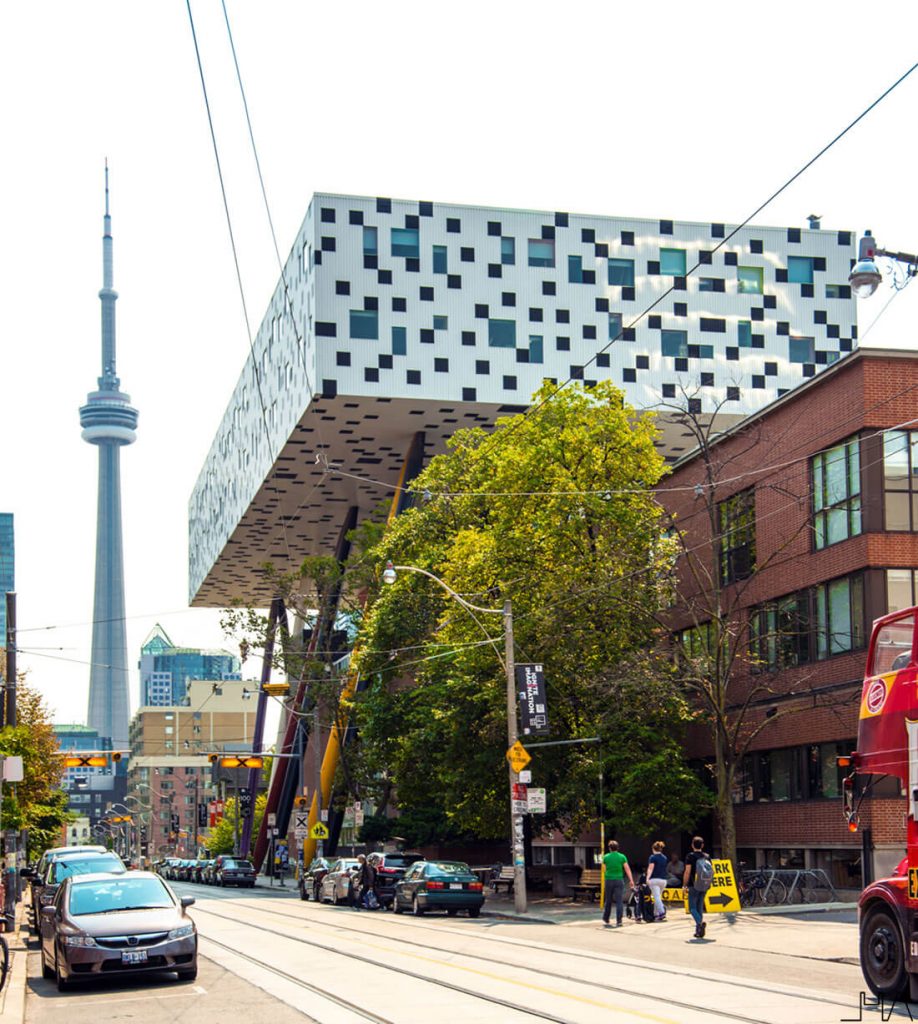 Once we went down the street, we walked through the area below the building. At that moment we realized what was one of its great values. The Sharp Centre for Design has become a singular entrance door to the Grange Park. But this is not the only contribution to the green space, since it also provides a distinctive background. 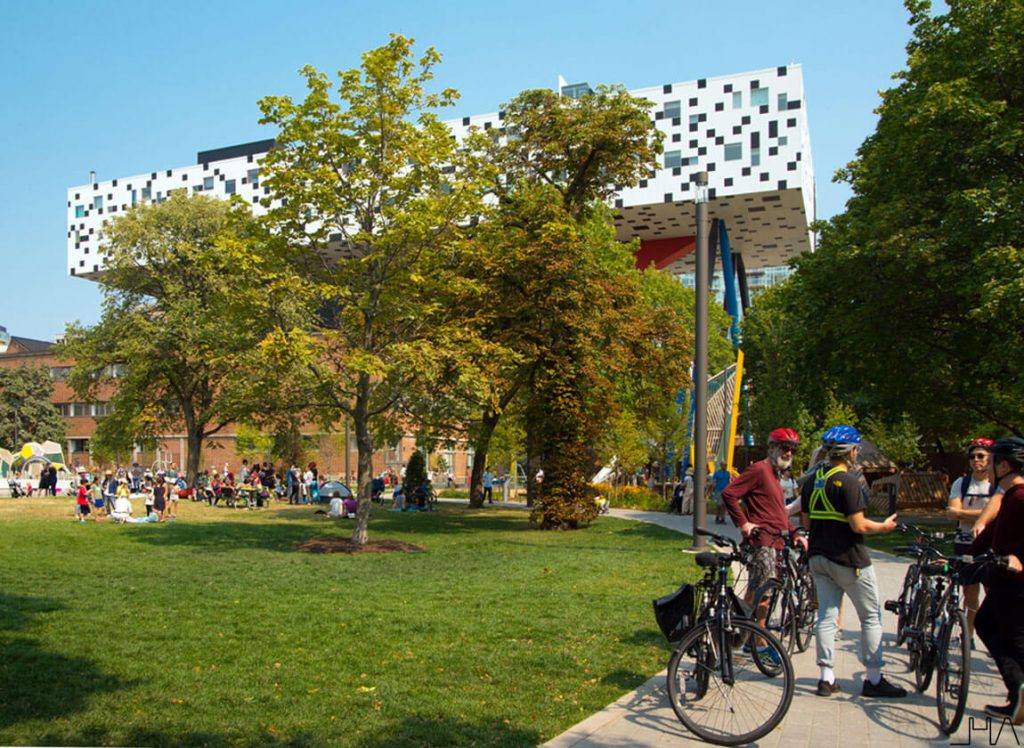 The building that changed Toronto’s architecture

The Sharp Centre for Design marked a watershed in Toronto’s architecture. After the opening in 2004, it became one of the 5 most influential buildings in the city. It was also really criticized, but nowadays the building is still a well-known icon.

The same year of the building opening, it received the Worldwide Award by the RIBA [Royal Institute of British Architects]. They described it as “courageous, bold and just a little insane”.

This was not the only award, since it became really popular in Toronto and abroad thanks to the original design. Can you imagine a better building than the Sharp Centre for Design for taking Art and Design classes? Many people didn’t find it, because OCAD University had an increase in the registration rate after the opening. 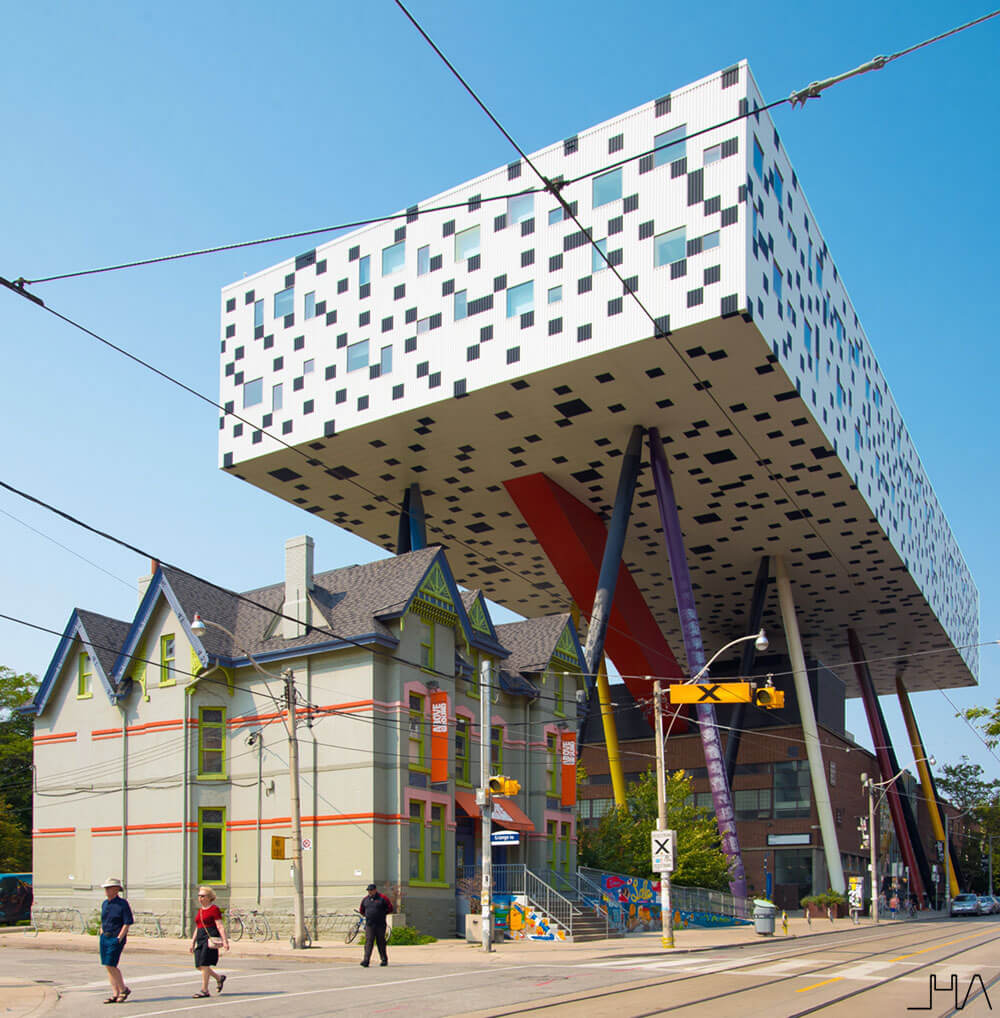 How is the interior of the building?

I’m sorry to say that I would love to know first hand how is the interior of the Sharp Centre for Design, but it wasn’t possible. This time I had to settle for the exterior and surroundings, because the building was closed.
Anyway, it seems that the interiors have little to do with the eccentric exterior of the building. According to the architect, the interiors are overly compartmentalized. Others go even further and say that at no time you can feel that you are inside a raised volume.

Nowadays, OCAD University is working in a project to expand the campus and restore the existing buildings. One of them will be the Sharp Centre for Design, with a full renovation of the interiors.

We must wait some time until all this work is finished. Even so, if you travel to Toronto, do not hesitate to visit the Grange Park and enjoy the views. I only hope I have more luck in my next visit to the city and show you pictures of the new interiors.